Who takes care of the cats of Athens when we’re all gone?

Those who stay behind in Athena in August, they have the opportunity to observe them better but also to understand how many there are. The reason for the strays cats of the metropolis, which when the capital is full and its rhythms are intense, are not so visible.

Fortunately for them, there is the animal welfare association “Seven Souls – Nine Lives”which was created the 2008 and deals systematically with the care of stray cats in the center of Athens. The goal of the active network of volunteers is to reduce the overpopulation of stray cats through sterilization and rehoming programs in the urban environment. In 2020 alone, the association undertook the sterilization of 1,700 cats.

But apart from that, the union undertakes to keep the stray cats healthy and… fed even when the city is deserted.

In essence, the union’s volunteers feed them 365 days a year, so they never go without a meal (or two). In fact, as they say, the cats are used to this routine, they know the feeding time and even have their favorite volunteer to share a few extra meows with.

Why August is hard for stray cats

“We often find a box with an abandoned kitten or kittens on the street. Sometimes, the one who has abandoned, because he cannot take care of it while he is away on vacation or for any other reason, thinks that if he leaves it in the place where he has checked that there is food and water, the animal will survive. Very poor logic but we see it happening.

At the same time, the male cats change territories and move to the empty city because they want to mate. And, in July and August we thus have its populations. Newborns needing milk and soft food are multiplying. Now, we are in the era where adoptions and fosterings due to automatic vacations made by citizens, are plummeting.

»In this way, many volunteers host stray cats in our homes during the summer, when they need to stay off the street for a while. Since we have shifts feeding and caring for the different stray cat colonies, we make sure to plan ahead of time where each of us will vacation.

Before the summer starts we are also well organized in checking each colony, seeing what new animal has arrived and quickly going for a vet check, spay and spay.

Let me say here that we are around 50 volunteers who actively participate in the physical, each helping us in their own way, and volunteers from the rest of Greece and also from abroad in tasks such as managing the website or sending items for the bazaars we organize » .

How can we help the “Etapache”

“And how many stray cats are there in Athens?” we ask Mrs. Soldatou, and she answers: “We guess there are thousands. As for the main colonies that our association takes care of, these are located in the Acropolis, the National Garden, Omonia but also in Keisariani, Kallithea and the Tower of Athens.

In these areas we feed and care for at least 1,000 cats a day, cats that have been sterilized. We insist on this issue because it is the key element that makes them live long on the streets and withstand the hardships. We want the city’s stray cats to be part of the ecosystem. We want citizens to respect them.”

Mrs. Soldatou explains at this point what is the wrong tactic that many citizens in Athens are following and which, however, amplifies the problem instead of solving it. “Unfortunately and contrary to what the public thinks, by feeding them without spaying them at the same time, the problem is magnified. In colonies with unneutered cats, aggression among males competing for females increased first. That is why male cats often have bites on their necks themselves open wounds. There are also sexually transmitted diseases in cats too, and especially FIV, our so-called HIV, which is transmitted through wounds but also through sex. 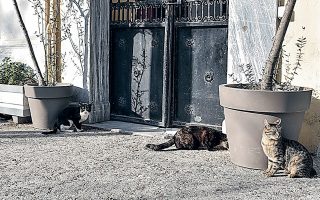 “This specific disease lowers their immunity. So if we are talking about a colony that has food but its members are not sterilized, then we are also talking about many baby kittens, out of 10 for example, 2 will survive. Very often, if these kittens survive, they develop an upper respiratory or eye infection, which is why we often see one-eyed or blind kittens on the street.”

Financial assistance for those who cannot actively participate is equally important – one can buy something from the association’s e/shop or proceed with a monthly subscription – for €3/month he undertakes the feeding of a sterilized cat, for €20/month feeding for 7 sterilized cats and so on

He can of course also adopt one or give someone who will housing for a while, for reasons of emergency/serious health issue.

Follow it kathimerini.gr on Google News and be the first to know all the news

See all the latest News from Greece and the World, at kathimerini.gr

With dynamic rallies in Athens and Thessaloniki, the struggle of the artists culminates – The Press Project

Athens: Light and darkness in an eternal battle