/PHOTO/ Martin Bezdíček from Blansko is a railway fan. Since the beginning of the work, he has been photographing and mapping the extensive repairs of the railway corridor on the route between Brno and Blansko. Some time ago, he founded a group on the social network Železniční tráť Moravský Švýcarska, Brno – Blansko to Česká Třebová. 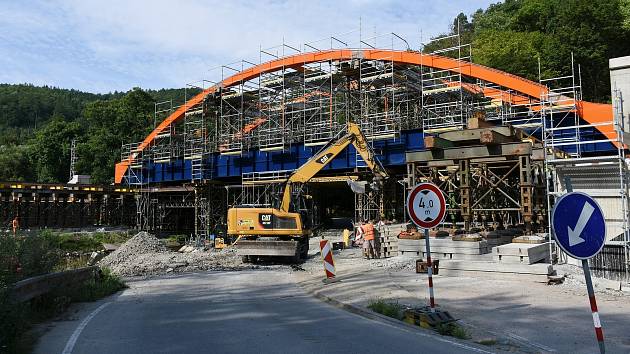 Current progress of works on the reconstruction of the railway corridor between Brno and Blansko.

| Photo: with the permission of Martin Bezdíček

Pictures and videos are filled with railway enthusiasts from all over the country. They also follow the site abroad. The images are selflessly provided by the editors of the Journal. “Work on the railway is progressing very quickly and the landscape is changing beyond recognition. The biggest bomb for me was folding and moving the bridges near Adamov. Put together such a colossus on the spot with segments, hats off. The bridges become a new dominant feature of the Svitava river valley and the track. The railway station in Adamov has also changed fundamentally,” says the enthusiast.

The new bridge in the center of Blansko: they will probably extend it at the end of the week and at night

The railway administration is preparing a guided tour of the repaired tunnel number 8/2 on the first Saturday in September. Interested parties do not need to register in advance. “Part of the program is a guided tour of the tunnel and a quiz for prizes,” railway workers are enticing to the event.

The new Novohradsky tunnel has a diameter of approximately eight meters and is over 556 meters long. It is maintained by the cadastre of the village of Olomučany in Blanensko and has the designation Blanenský tunnel number 8/2. The workers began to excavate the exploratory tunnel in 1988, then the excavation of the tunnel began using the ring method in February 1990. The railwaymen opened it on November 19, 1992. Now, the workers expanded it during the reconstruction of the corridor.

Shall we go by train? Why football stars prefer to fly

Lipták, Kostelecký and Štěpán are vice-champions of the world in team shooting

Video series: Sokol is fun. He will also teach you how to do front legs on the trapeze