Vhnánek, in cooperation with the Institute of Planning and Development (IPR), had the ppm factum agency prepare an online survey on a sample of 2,200 respondents, whose aim was to find out who the typical unregistered person is and how to motivate them to change their address. “The investigation confirmed a certain assumption that we had, but which was not based on any verifiable facts,” said the deputy.

He added that according to the results of the survey, he is a typical resident without a permanent residence in the metropolis a young person who came to study and settled in Prague after school. Vhnánek added that 54 percent of those interviewed without a permanent residence are also considering reporting their residence in the next five years, which is an opportunity for the city to target them with a campaign or incentive programs. “If they targeted this group and managed to convince them, then we would be able to to reach approximately 4.5 billion crowns per year,” he said.

According to him, the city could motivate people to oversubscribe, for example, by offering financial incentives for services such as Public transport, parking, waste collection or entry to Prague attractions, possibly even a one-time financial reward. Possibilities of negative motivation include, for example, preventing the use of public services. “I would personally lean towards the positive motivators if the city decided to actively reach out to citizens,” Vyhnánek added.

He himself will no longer propose concrete steps before the autumn elections. “There is no more time for that until the elections, we wouldn’t be able to do that anymore,” he said. He added that the next city management will have all the documents ready to possibly create well-targeted campaigns and programs.

The deputy went on to say that this is a general problem. “I know that a number of larger cities struggle with the fact that they have significantly more residents than they report,” he said. According to him, with regard to the way taxes are distributed to municipalities, it is essential that people actually have a registered permanent residence where they live, so that cities can finance public services.

According to him, changing one’s place of residence is no longer difficult and one has to at the office only for the replacement of the identity card and, in the case of car owners, the technical license. The rest can then be resolved by phone or online. At the same time, the absence of a permanent residence brings disadvantages, for example from the point of view of the paid parking zone, school and school enrollment or the possibility of applying for housing allowance.

IPR recently published an analysis that was based on anonymized data from mobile operators. According to that, there are about 300,000 more people living in Prague instead of the official 1.3 million. However, according to Vyhnánek, there will be a little less of those who really live in the city permanently, because data operators also include those who are in the metropolis for work, perhaps only for a year.

According to the CZSO, approximately 1.28 million people lived in Prague as of December 31, 2021, which was 1.3 percent more. Last year, 15,993 people came. The increase was mostly caused by people moving to Prague. The average age of the inhabitants of Prague was the lowest in the country and amounted to 41.4 years, which is 1.3 years less than the national average. Among Prague residents, there were the most people with a university degree, and the largest number of foreigners also lived in the metropolis. 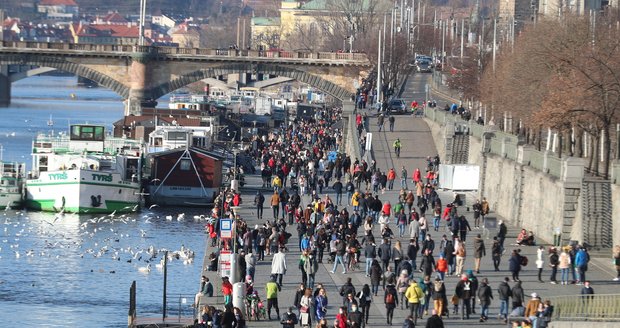 Roasted on the beach.