Sparta Kolín celebrates its jubilee. He has been on the football scene for 110 years! And that’s a good reason to celebrate. After the match with Slavia Prague, the second part of the celebration is approaching. On Saturday, August 20, 2022, a famous team made up of sports and cultural figures from Real Top Prague will come to Koln’s Borké. 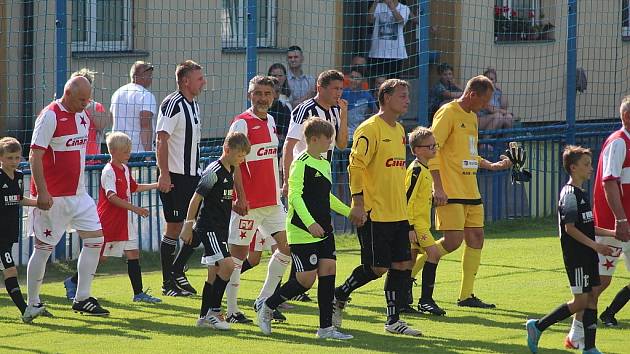 From the celebration of the 110th anniversary of the Sparta Kolín football club. Match of old guard Kolín with Slávia Prague

On the day of the celebration, a small amateur soccer tournament will take place on the large artificial grass starting at 9 a.m. It will also include a series of auctions that will take place via Sparta Kolín’s Facebook page.

VIDEO, PHOTO: Football advertisement. Kolín shot with gusto against Most

“We are preparing an auction for gloves signed by Přemysl Kovář, a shirt signed by Lukáš Masopust, a representative dress with the signatures of Milan Škoda, Marek Suchý and Luďek Zelenka and others,” revealed the club’s press spokesman Tomáš Šulc.

“If you are interested, follow our Facebook page and help us raise as much as possible for Viktorka. The entire proceeds will be added to the entry to the event itself and then the entire amount will be handed over to six-year-old Viktorka, who suffers from severe epilepsy and spasticity of the lower limb,” added Šulc.

At 2 p.m., the main thing of the whole day will begin. Real Top Praha, a team made up of celebrities not only from the sports but also from the cultural sector of the Czech Republic, will come to Cologne. You can already look forward to, for example, singer Vojta Dyk or actor and presenter Jakub Prachar.

You can buy tickets in advance now for CZK 150 at the Jiskra Restaurant from August 1, 2022. There will be an entrance fee of CZK 180 on site.

Rivals from Slovakia, Croatia and Austria await the Bears