Prague Zoo 20 years since the flood: World pavilions have grown

The height of the water level peaked on August 14, 2002. At that time, 5,160 cubic meters of water per second flowed through the raging Vltava in Prague. In some places of the Prague Zoo, the water reached more than ten meters above ground level. Almost half of the former area was flooded. Employees evacuated 1,029 animals. Despite all efforts to prevent victims. The elephant Kadíra, for example, did not survive the flood. He weighed over four tons and was aggressive. There was a threat that he could swim in open water and endanger the public. The breeders therefore had to euthanize him.

The keepers put the gorillas to sleep and transported them to safety in rubber boats except for the young male Pong, who drowned. Not even the hippos Barborka and Lentilka survived.

The dramatic experience ultimately had a positive impact. The zoo now protects the embankment against high water. AGAINSTSeveral new pavilions and world-class exhibitions were created in the area outside the flood zone. In the lower part of the Vltava floodplain, mainly birds, sea lions, but also large animals remain. Among other things, monkey islands were created there. Only light structures are built here and those over which the water will spill over without significantly damaging them.

Today, a herd of octopuses inhabits the Elephant Valley for 346 million crowns. It is the largest such exhibition in the Czech zoo. The new pavilion also got hippos. Its construction, including enclosures and stables for the neighborhood antelopes, cost 173 million crowns.

In addition to other animals, female gorillas Kijivu, Shinda, Kamba and a small male Ajabu are already living in the new Dja Pavilion. They will soon be joined by Duni, the daughter of the first gorilla born in the Czech Republic, Moja, and a new breeding male. The new pavilion cost 300 million crowns. This amount includes, among other things, the construction of a new entrance to the zoo or an access bridge. It will be open to the public on September 28. The males remain in the “old”, but according to the zoo director Miroslav Bobek, their evacuation should not be too complicated in the event of a flood.

Heroes of the Flood: Gaston the Warrior

Gaston the sea lion became the hero of the flood. He fought with the flow of the Vltava and the Elbe for several days. He swam more than 300 kilometers. He only got ashore in Germany, near Dresden. However, he died of a lung infection and exhaustion while being transported to Prague. He has a memorial statue in the zoo.

Slávek, the hippopotamus, became a symbol of hope during the floods survived two days in the Pavilion of large mammals, flooded up to 1.5 m below the roof. The breeders did not know about him for 24 hours. Slávek waited on the staff walkway above the elephant stand. He then poked his head through the window above the rhino stand and watched the surrounding events. So he let the breeders know that he had survived the disaster. He finally went down the inclined ramp. 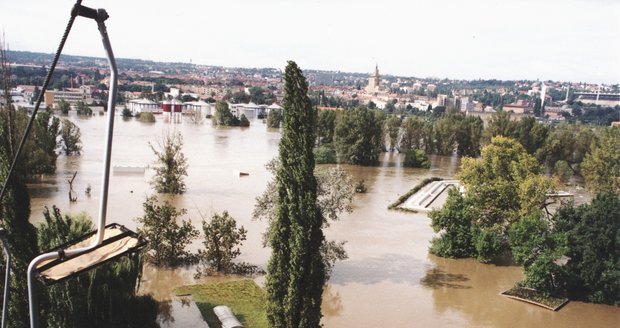 ‹ A new Lidl will be built in Židlochovice: see what it will look like › Météo France predicts thunderstorms for Toulouse and Occitanie: they could be accompanied by hail