Kotryna Teterevkova, shining with bronze: “Perhaps Lithuania is a country of brassists?” | Sports

The weight of Lithuanian swimmers’ luggage has been increasing since bronze.

Kotryna Teterevkova became the third representative of our country in the European Championships in Rome, where Lithuania can be proud of such a wide team of winning athletes for the first time.

Lithuania can also be proud of K. Teterevkova, a 20-year-old from Vilnius, who grew up in a city that suffered from a drought of swimming pools for decades, but still managed to achieve her goals.

On Monday night, she quickly showed that she can do even more when she took off at high speed in the 200m breaststroke final.

Although she was fifth in the selection and third in the semifinals, K. Teterevkova started much more powerfully in the finals, crossing the water with her trademark long lunges and curls to be first in the 50m, 100m and 150m.

This is the former European Youth Champion’s first award at this level of adult competition, where she has consistently excelled in recent years.

Having taken fifth place in the 200 m breaststroke at the World Championships in June, and finishing fourth in the 100 m distance at this European Championship, K. Teterevkova finally reached where she aimed for this year.

– Kotryna, said “finally”, because this is a much-awaited award, the highest in his career?

– 200 m is psychologically quite a difficult race for me. Before that, there were many starts – 100m heats, semi-finals and finals, the next day 200m heats and semi-finals. I swam non-stop in the mornings and evenings, there was no time to recover, then after 200 m I say “finally” and I am happy that I finished with a medal.

– What does this medal mean to you?

– I am happy, because I can make my parents and not only them very happy.

And for me, it’s an incentive to work hard, that I’m worthy and that I hope to climb the podium again in the future. This medal is like a self-esteem, and maybe even a gift from God.

– Didn’t the favorite labels that started to be applied before the championship create pressure?

– There is always pressure, not only from rivals, but also from the environment, because everyone wants the best. However, I cannot control others. I can control myself, my swimming and recovery, so I try to swim in my own way, at my own pace, I can control my emotions, but I can neither speed up nor let others go. – What tactics were coordinated with the coach Mikhail Romanovskis in the distance where you led for a long time, and then you fought for the bronze?

– The coach trusts me because I know what I’m doing. Of course, there are tensions that sometimes make you start a little faster and sometimes a little slower. It doesn’t scare me. I can’t control everything, I try to swim as I feel. the great finish was due to some unfinished business with the coach, and maybe the COVID-19 I had two weeks ago. But I’m happy as it is. 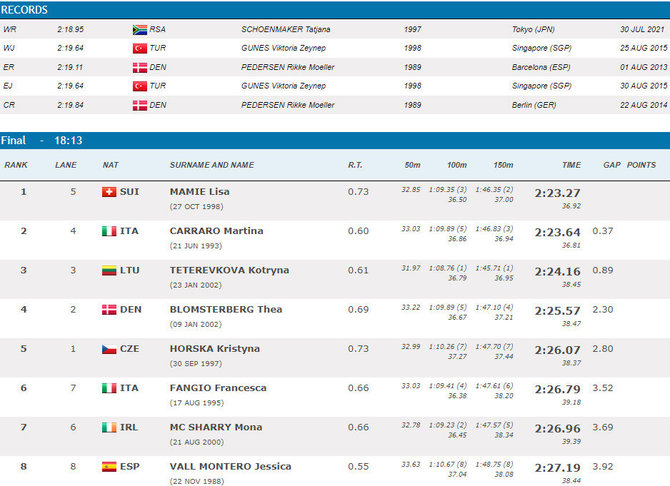 Tomorrow I will still swim 50 m breaststroke, but you can say that the vacation that I have been waiting for a long time begins. After the Tokyo Games, there were few of them, because I still swam in the ISL last year.

– All three Lithuanian swimmers won bronze – maybe you have agreed?

“That’s what I thought about it, too.” On the other hand, it doesn’t matter what color the awards are, what matters is that there are medals, which are an appreciation for our team, because I can’t remember when even three people brought home medals. 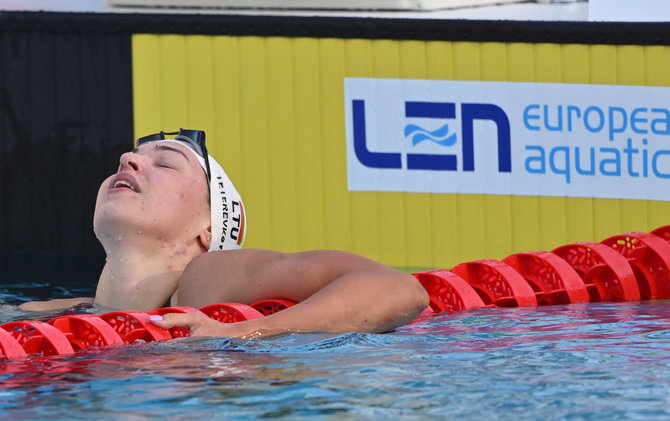 – And all three medals won in breaststroke at the European Championship. Where is the secret?

– I think that it stimulates Rūta when we saw that it is possible to win a medal in breaststroke. Maybe others are hooked too.

However, I myself have been breaststroke since I was a child, because I did not like other styles. Or maybe Lithuania in itself is a country of brasists?

– You grew up in Vilnius, which has had problems with too few swimming pools for many years. Have there been difficult moments in your career where you needed to find motivation?

– When Lazdynai pool was closed in my youth, it was really sad. There was no place to train, one day I had to go to Elektrėni, the next day to Širvintas. I was still in school then, so it was very difficult to train in the morning and in the evening. However, even in such conditions, I won the youth championship medals.

It seemed that such conditions were unfair, but at the same time it motivated me that you swim, you train, you have a goal and you can win a medal. 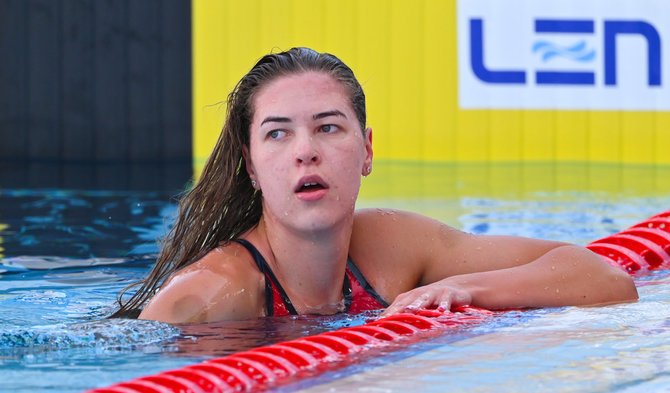 – You mentioned that vacation is coming soon. What are you planning for autumn?

– Now rest at home with family and friends. And then a holiday with a friend in Santorini, and then with my parents in Turkey. Everything is planned, I’m really looking forward to it.

– A. Šidlauskas called the 50 m breaststroke event entertaining. And you will go to it on Tuesday as entertainment? – How do you assess Rūta Meilutytė’s chances to fight for the gold with Benedetta Pilato and others?

– I always hope that our people will win. I am always sick and hopeful. We’ll see.

The hottest news from Huawei in Lithuania: the long-awaited Mate 50 Pro and nova series smartphones – AINA

When the Seimas is considering plans for the direct management of the LFF, the UEFA representative assures that Lithuania will be suspended