While the coming catastrophe scenarios across Europe are becoming increasingly clear, the “EU-Alert” disaster warning system is apparently not given any priority in Austria. Two months after the implementation deadline for the EU directive, the State Secretariat responsible for digitization has not even submitted a draft.

Currently on this in ORF 2

The consumer magazine Konkret took a closer look at the implementation of NL-ALert in the Netherlands, which falls under “best practice” across the EU. (23.8. 6:30 p.m. ORF2)

The example of Germany shows that the real problems only arise during implementation. According to an analysis by the think tank AG Kritis, not even half of all mobile phones in Germany can be reached by such an alarm.

This is the latest stable version of the ETSI Specification for Cell Broadcast from 2019. The first version dates back to 2001. The European Telecom Standards Institute standardizes all technical processes and requirements in Europe’s mobile networks, with the actual technical work being carried out as part of the “Third Generation Partnership Projects” (3GPP), which belong to the International Telecommunication Union (ITU) belongs. This analysis by AG Kritis from DE-Alert isn’t the only one on the subject raised by critical infrastructure experts has been published.

How the EU alert system works

The core function of cell broadcast is more similar to radio or TV than mobile communications, although the respective “target groups” can be precisely selected geographically on an ad hoc basis. As a result, only those who are actually at risk are alerted.

The “Technical Guideline DE-Alert” was already published in February 2022 by the German Federal Network Agency, the implementation should be completed by the end of February 2023. However, this date cannot be kept, because unexpected technical hurdles came to light during the first test series. A first, Germany-wide test run using DE-Alert was planned for the next warning day on September 8, 2022. This test has already been postponed to the beginning of December, the problems do not relate to the network configurations of the mobile operators, but two months after the end of the implementation period of the EU directive, the responsible state secretariat under Florian Tursky (ÖVP) has not heard anything, except that the implementation is in progress be. The interfaces for the “Cell Broadcast” service, on which all these alarm systems are based, have been available in all mobile phone networks since 2001.

A cell broadcast alert must appear on the screen without user interaction, even when the screen is locked. Although the service is technically similar to SMS, it allows texts of up to 1,395 characters, and a standardized, loud alarm tone sounds at the same time. This must also work when the mobile phone is muted. In addition, the message does not go to a specific end device, but to all mobile phones that are registered with one or more selected cell towers. It is therefore a broadcast system like radio or TV, but with the difference that it can be decided ad hoc which geographically defined “audience” should be reached and which not, in order to avoid general panic. 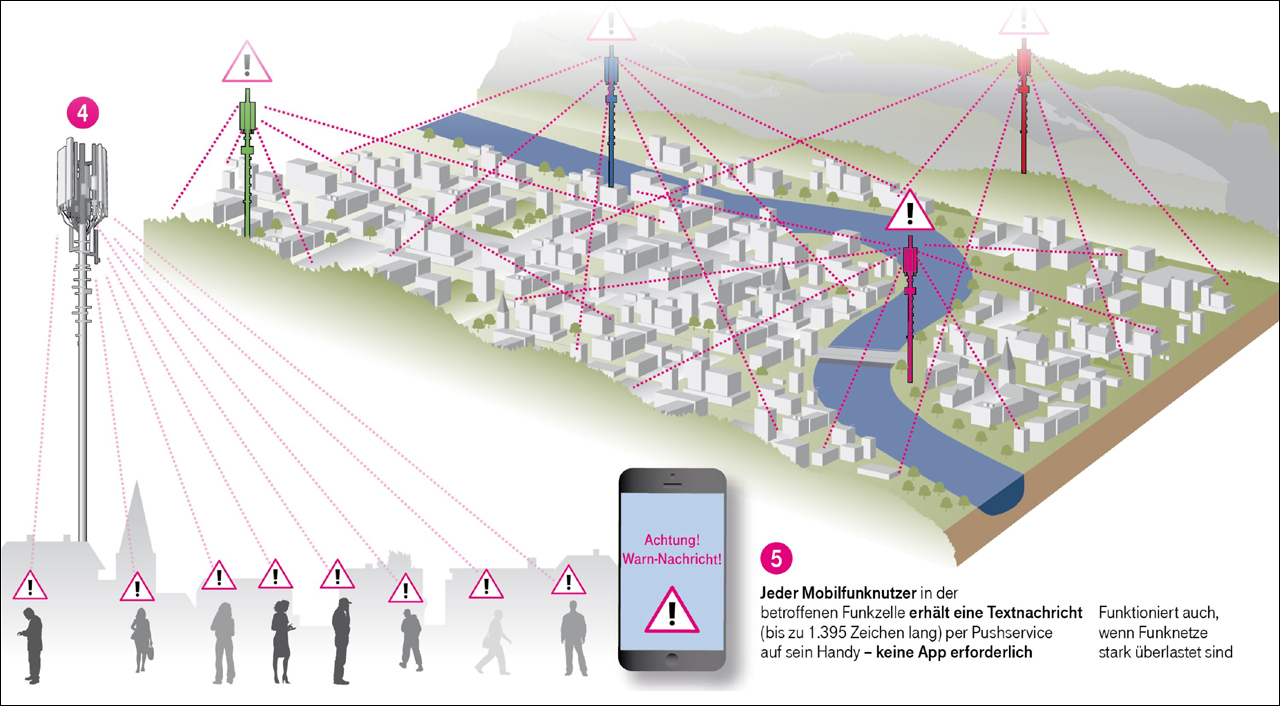 This graphic from Deutsche Telekom AG on how Cell Broadcast works, was published immediately after the flood disaster in North Rhine-Westphalia with around 200 dead in the summer of 2021. Most people had been caught in their sleep because not even the sirens had worked in the affected areas. The image section shows four radio cells from different mobile operators, which are intended to reach all mobile phones in the area affected by an imminent flood disaster.

What (doesn’t) work with DE-Alert

The problem situation emerges clearly from the analysis by the Kritis working group. The biggest problem are the two dominant operating systems. Cell Broadcast will run on iPhones at the earliest from version iOS 16, which was announced for autumn. The German implementation works on Google Android systems from version 11, older Android versions have to be configured manually by the smartphone owner, which is a very cumbersome affair, according to AG Kritis. The same applies to the different Android versions of the smartphone manufacturers. So in this case, it is the operating systems that prevent the user from being notified, although underneath, at the SIM card operating system level, everything should work.

Almost everything, because German thoroughness also comes into play. The EU directive offers numerous options for defining message types, i.e. a binding framework within which national authorities can act relatively freely. According to the AG Kritis count, in Germany there are “16 message types, which differ depending on the type of alarm, range and language”. In addition, there are “different levels for the importance and urgency of the warning”, which are identified by four-digit message identifiers. This excludes all older mobile phones, as they only work with three-digit IDs.

The German authorities have already responded to the criticism. This passage was added to the text of the regulation on August 10th. The warnings of the highest alert level must also be sent out with a three-digit header that older mobile phones can also interpret.

The German authorities have also implemented a lean, purposeful alerting system to protect the affected population from acutely threatening regional disaster situations as a highly complex disaster information system by simply adopting all the optional options and combinations of the EU directive in the German “specifications”. This increases the need for training for the authorities involved, as well as the probability of false alarms.

There is currently nothing to report from Austria because implementation has apparently not even started to date. “It is therefore not due to the networks, nor to the operators or end devices, but simply to the fact that we cannot commission and implement any systems without the technical details in the regulation,” says Tom Tesch von Drei to ORF.at. In response to repeated inquiries from ORF.at, ZiB2 and Konkret (ORF 2), the State Secretariat under Florian Tursky was not even able to name a projected date when the first draft of the regulation should be completed.

The whole of Austria is happy about this weather report – weather