80 years ago, the convoy’s supplies were stolen as the nation starved

When the surviving ships of Operation Pedestal (the Santa Maria Convoy) entered the Grand Harbor exactly 80 years ago, just before the planned surrender of Malta, another operation began involving 3,000 personnel of -armed to unload supplies.

But the situation was so desperate in Malta, that the supplies of the convoy were constantly stolen by Maltese civilians, police officers and British soldiers.

While Operation Ceres was going on day and night, the Police Commissioner submitted daily reports on the kidnapping to the office of the Lieutenant Governor.

These documents are now preserved in the National Archives of Malta. The first report is dated August 15, 1942, and the last one almost a year later – July 12, 1943.

The hijacking started on board the ships, all the way to the guarded warehouses on land.

Barely an hour after the SS Ohio entered the port for the relief of the islands, Anthony Mifsud from Qormi allegedly stole a tin of preserved peaches from a lighter on board. Shortly after, Alfred Ellul stole two bottles of beer from the MV Brisbane Star, which had entered the port the day before.

After a few more entries, it should be noted that while he was on patrol at 7.30pm, Inspector Tonna found, among others, two tins of cigarette tobacco, a tin of paint, two pairs of socks, a sailor’s jumper, a pair of boots ‘ on, a. boiler suit and oil skin in a cave at Senglea Point.

And much later in the night, PC 103 Busuttil caught two soldiers lifting objects from three civilians.

A man was even caught siphoning fuel, but claimed he thought it was water, while another was brought to court for having in his possession some flour in a handkerchief.

Ten days after the arrival of what was left of the convoy, the problem of looting was even raised in the Council of Government by Henry Sacco, who claimed that “policemen, soldiers and even guards trusted by the cargo patrol’. He recommended an inquiry and warned against an “eyewash” investigation.

The first day the report was preserved in the National Archives of Malta in Victoria. 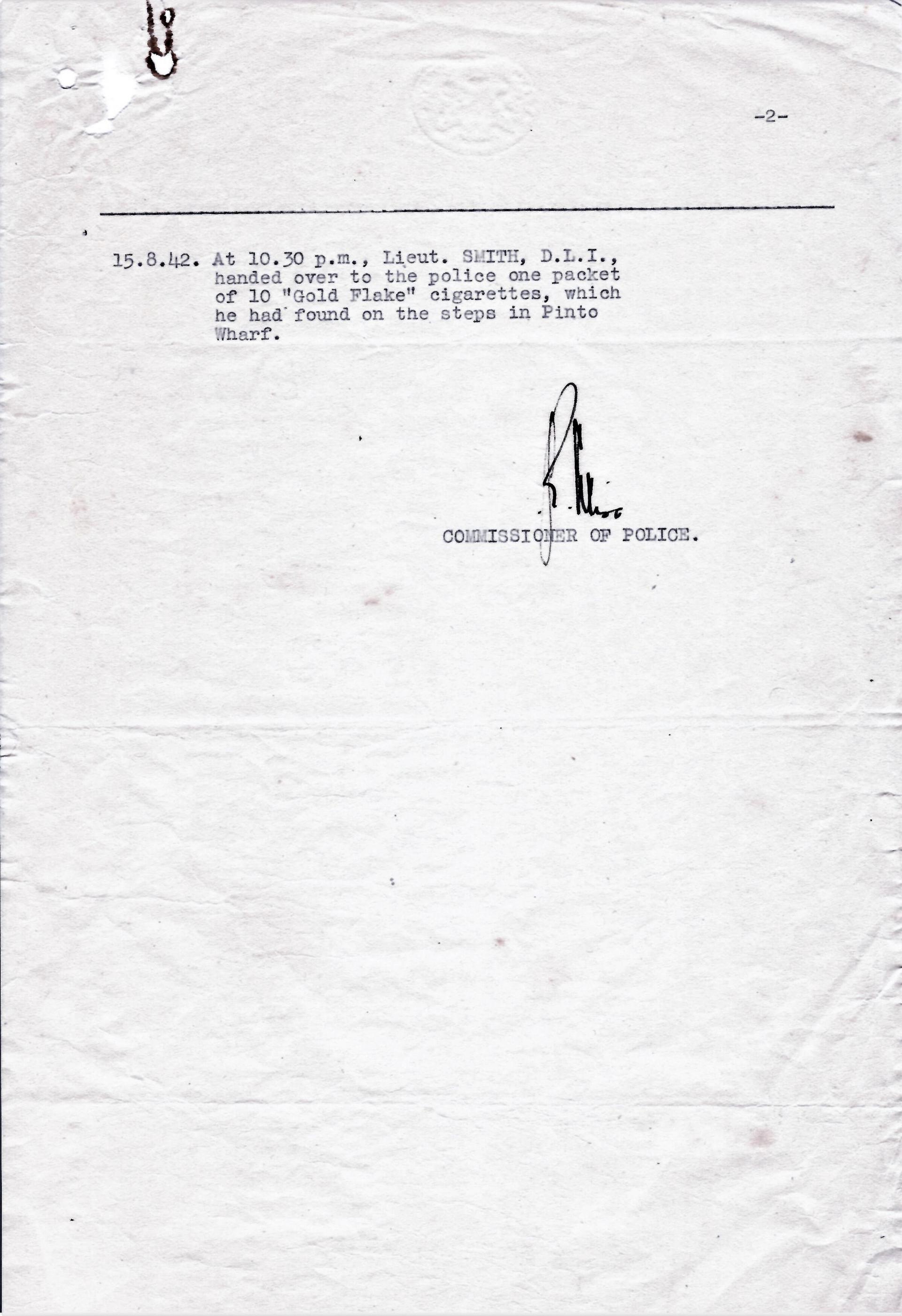 The first day the report was preserved in the National Archives of Malta in Victoria.

“By August 1942 we were literally at our wits end: people were hungry and desperate,” said World War II researcher Simon Cusens. Times of Malta.

The water mains were closed and the flushing of toilets in public buildings – except for once at the end of the day – became illegal.

People lived in caves, pregnant women gave birth at home, bandages were reused until they fell off and some married women resorted to prostitution to feed their children. People queuing in Valletta for gash (leftovers from kitchens and ships’ plates) dumped in a rubbish tip which costs one cent a cup.

The Government Council was discussing timeframes for the slaughter of goats and horses for consumption.

“There was no limit to what people were willing to do for a living,” Cusens said.

“Many historians say that the actual surrender of Malta was already doing the rounds in top secret communication: the target date for the surrender was planned for around the first week of September. A garrison of 30,000 men and the whole island would surrender simply because life could no longer be sustained.

“The remnants of the Operation Pedestal convoy arrived just in time and changed everything not only for Malta but also for the invasion of Sicily – known as Operation Husky – and therefore the acceleration of the end of the Second World War .”

Operation Pedestal, Cusens recounts, followed two relatively disastrous convoys in June – Operation Harpoon and Operation Vigorous. All the 11 supply ships that were part of the latter, which left Alexandria, Egypt, failed to reach Malta. Just before, Operation Harpoon managed to deliver only two out of six supply ships: a paltry 15,000 tons for a country already suffering near-famine conditions. 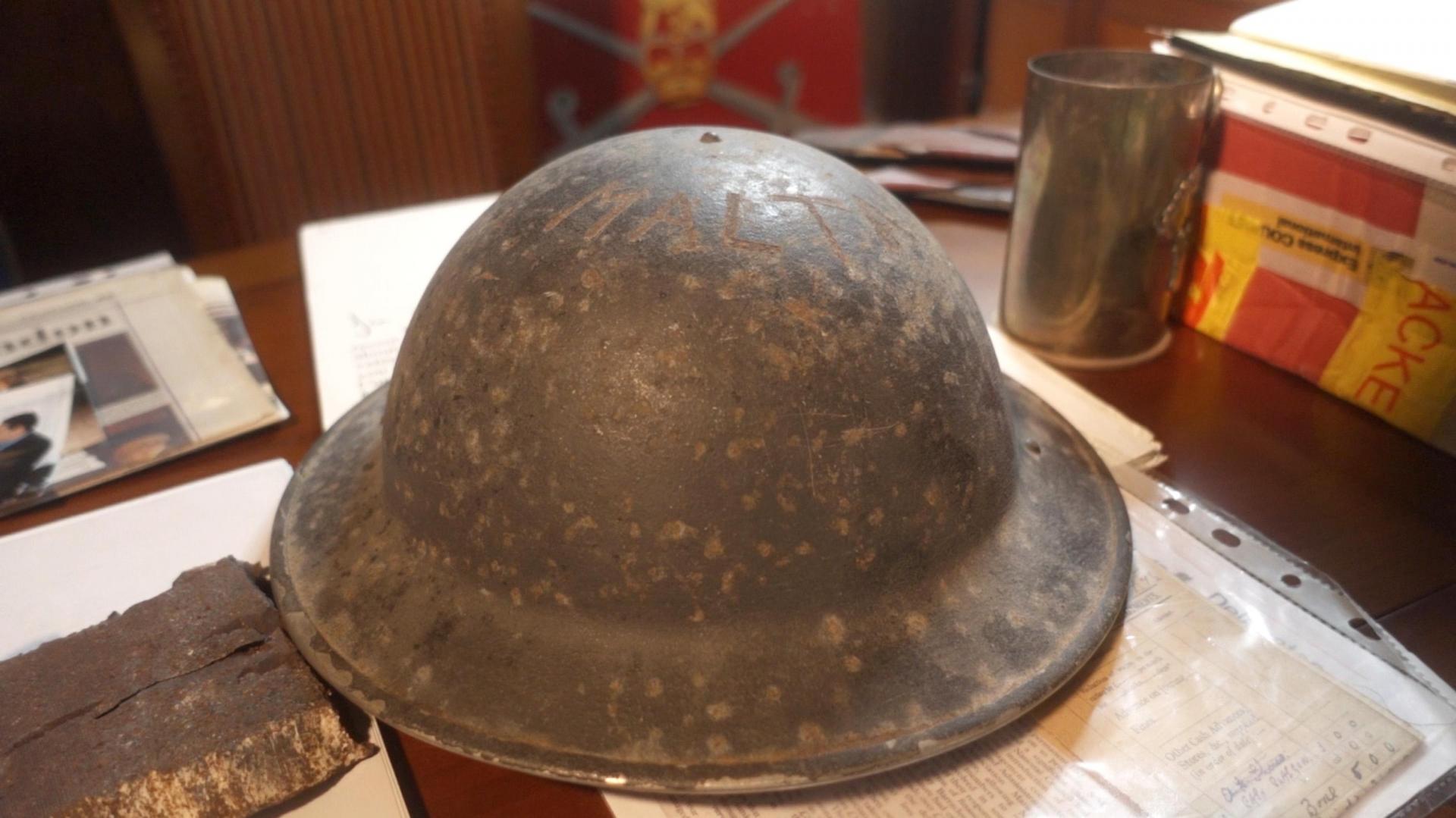 Helmet of Desmond A Dickens MN, of MV Dorset, who transferred to SS Ohio after his ship was sunk. Malta 1942 scratched on helmet. (Cusens Collection)

Four operations, one mission: get supplies to Malta

“To call Operation Pedestal a convoy is an understatement. It was a strategic Mediterranean military mission that involved four operations stretching from the Atlantic to the port of Alexandria in Egypt:

“One in the Atlantic served as a test, while a separate operation in Gibraltar involving the aircraft carrier HMS Furious flew 38 spitfires to Malta, of which 37 arrived here. There was also a reconnaissance operation that left Alexandria only to trick the enemy into looking east.”

What arrived here were the remains of Operation Pedestal which itself involved 78 ships, including three aircraft carriers, two battleships, seven cruisers, 34 destroyers, submarines, planes and some 23,000 hands.

“The losses were phenomenal: among others, an aircraft carrier and 160 hands were lost in just six minutes.

“The escort force for supplies is still unprecedented – there were more ships used in Operation Pedestal than the Royal Navy actually has afloat today.” 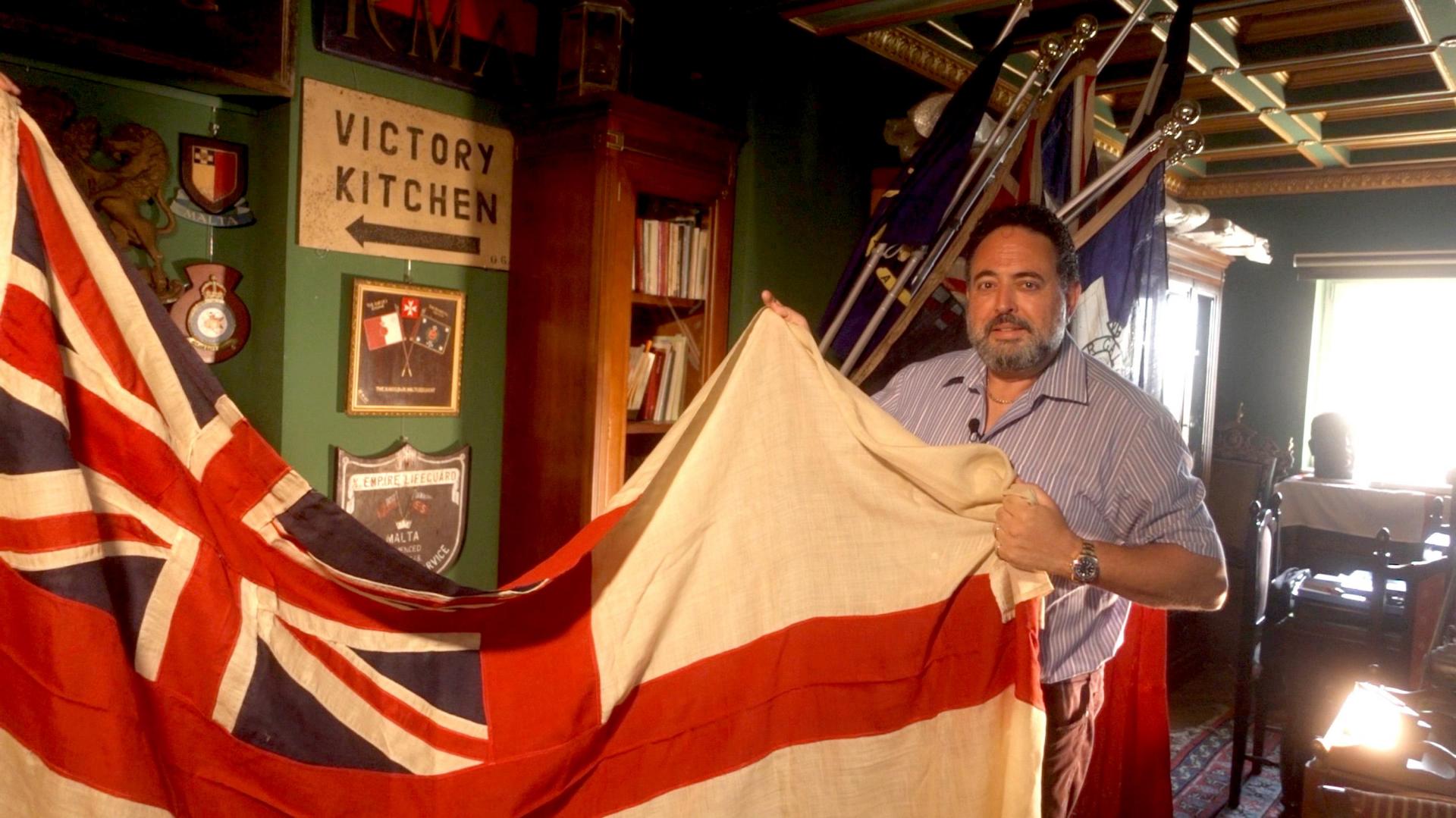 Simon Cusens with the original battleship HMS Eskimo Ensign (in use between 1940 and 1943, including Operation Pedestal) 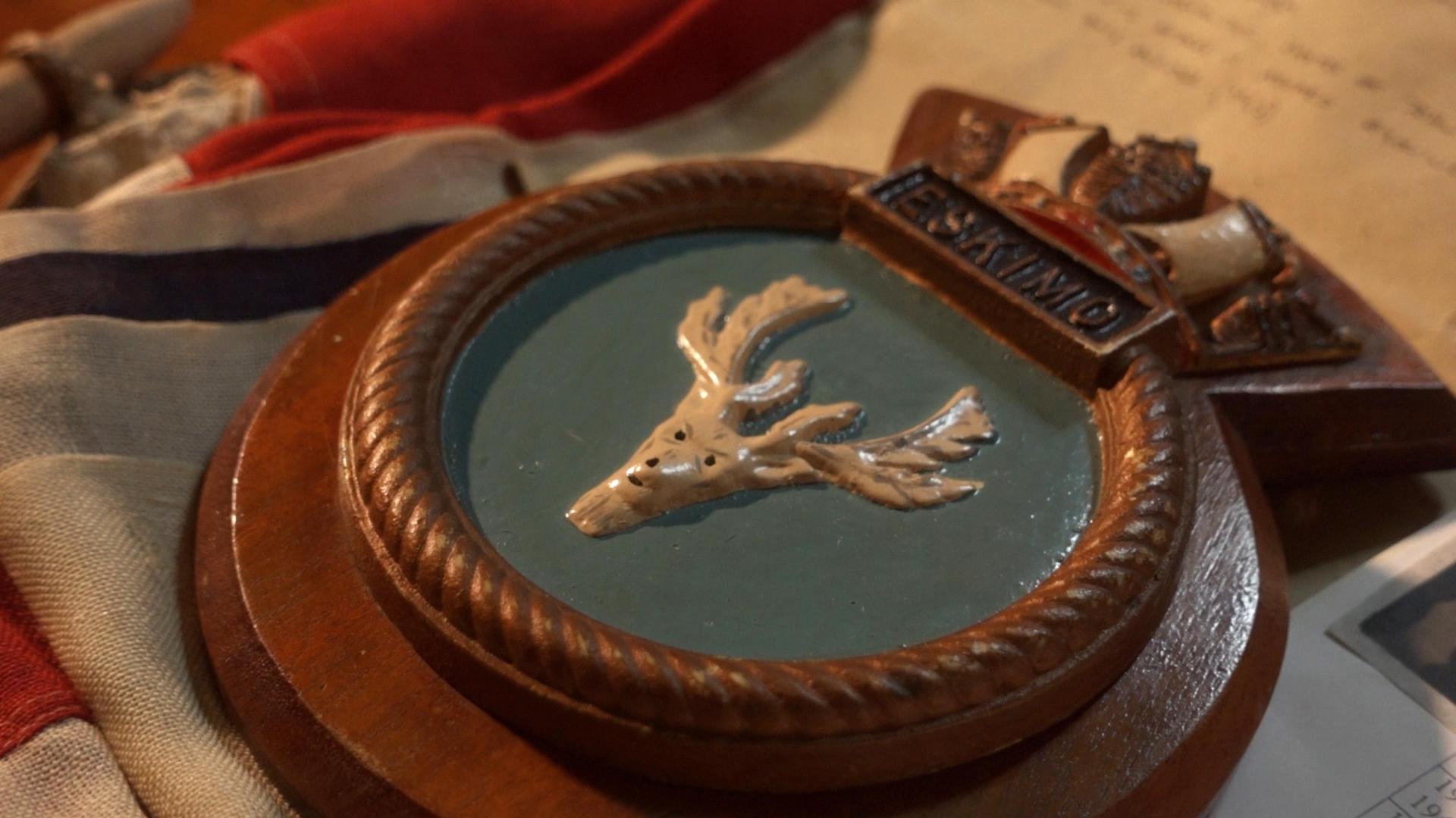 Crest of HMS Eskimo, one of the 34 destroyers that escorted the 14 Pedestal cargoes (Cusens Collection) 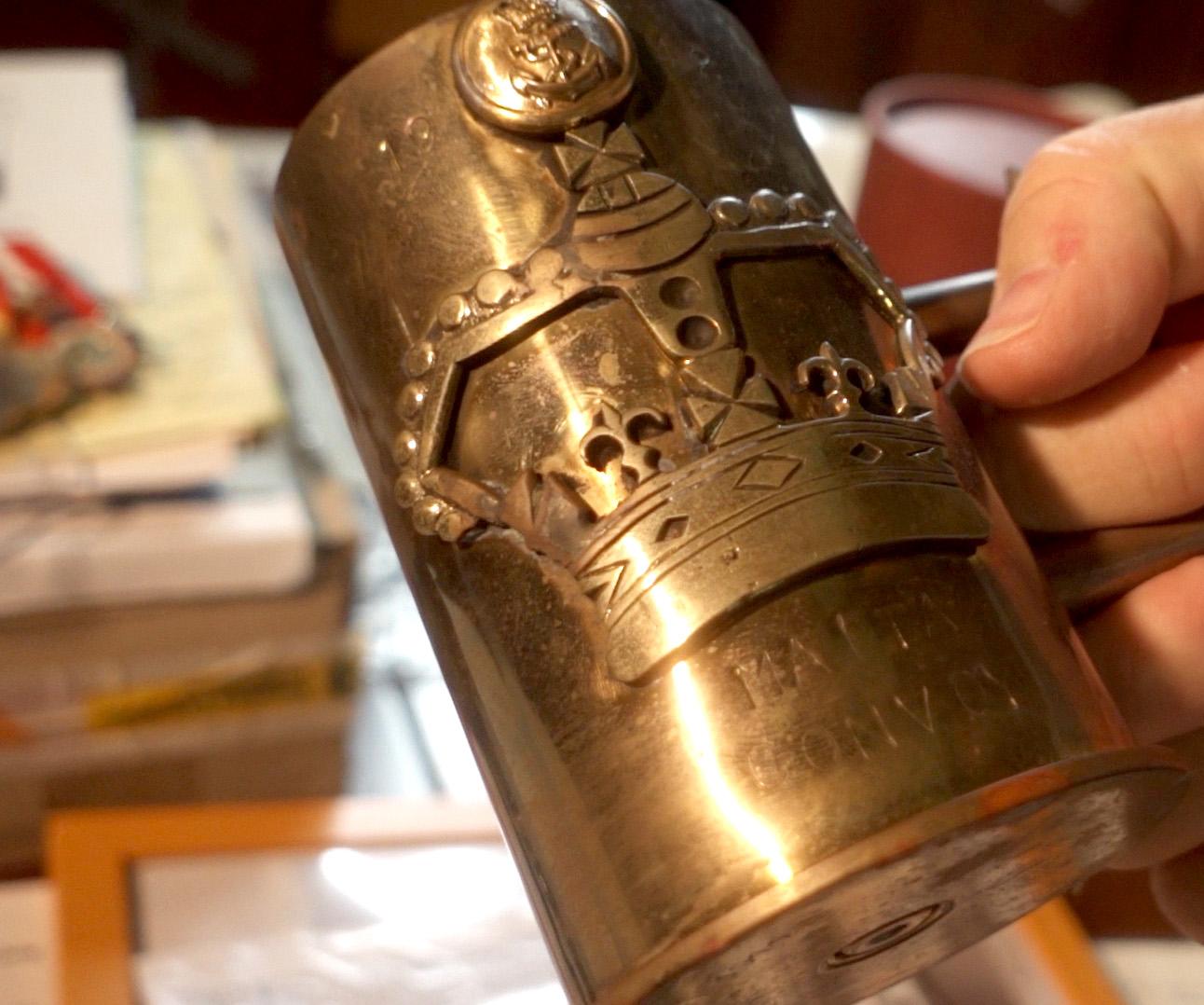 A trench art creation of a Malta Convoy mug made from a recycled cannon cartridge.

He survives Operation Pedestal but arrives in Malta 60 years later

“During my life, I had two encounters with the Germans, and I want to congratulate them for succeeding on both occasions,” said the late Ray Morton to former colleagues of Operation Pedestal during a reunion organized by Simon Cusens in 2002.

“The first time they succeeded in preventing me from arriving in Malta, and the second time in bringing me safely to Malta 60 years later,” added the Australian man, who flew here from Frankfurt aboard a Lufthansa plane.

Morton is among the survivors of the SS Ohio who never reached Malta in 1942 as he was thrown overboard when the tanker was hit by a torpedo.

Presumed dead and lost at sea, his friends wrote a letter to break the news to his parents, which they sent along with his bible that he had kept in his locker on board the ship.

Three weeks later his parents received another letter saying that he was alive and well but that they did not want to make any attempt to contact him.

It later transpired that once at sea, he survived more German aircraft fire, was picked up by a destroyer and taken to Gibraltar to recover.

The English man made it all the way from the United Kingdom to Malta aboard the Ohio.

He recalled, in several interviews since then, that as soon as he saw the ramparts dotted with people “like a swarm of ants”, he knew that this was a life-changing moment for them. 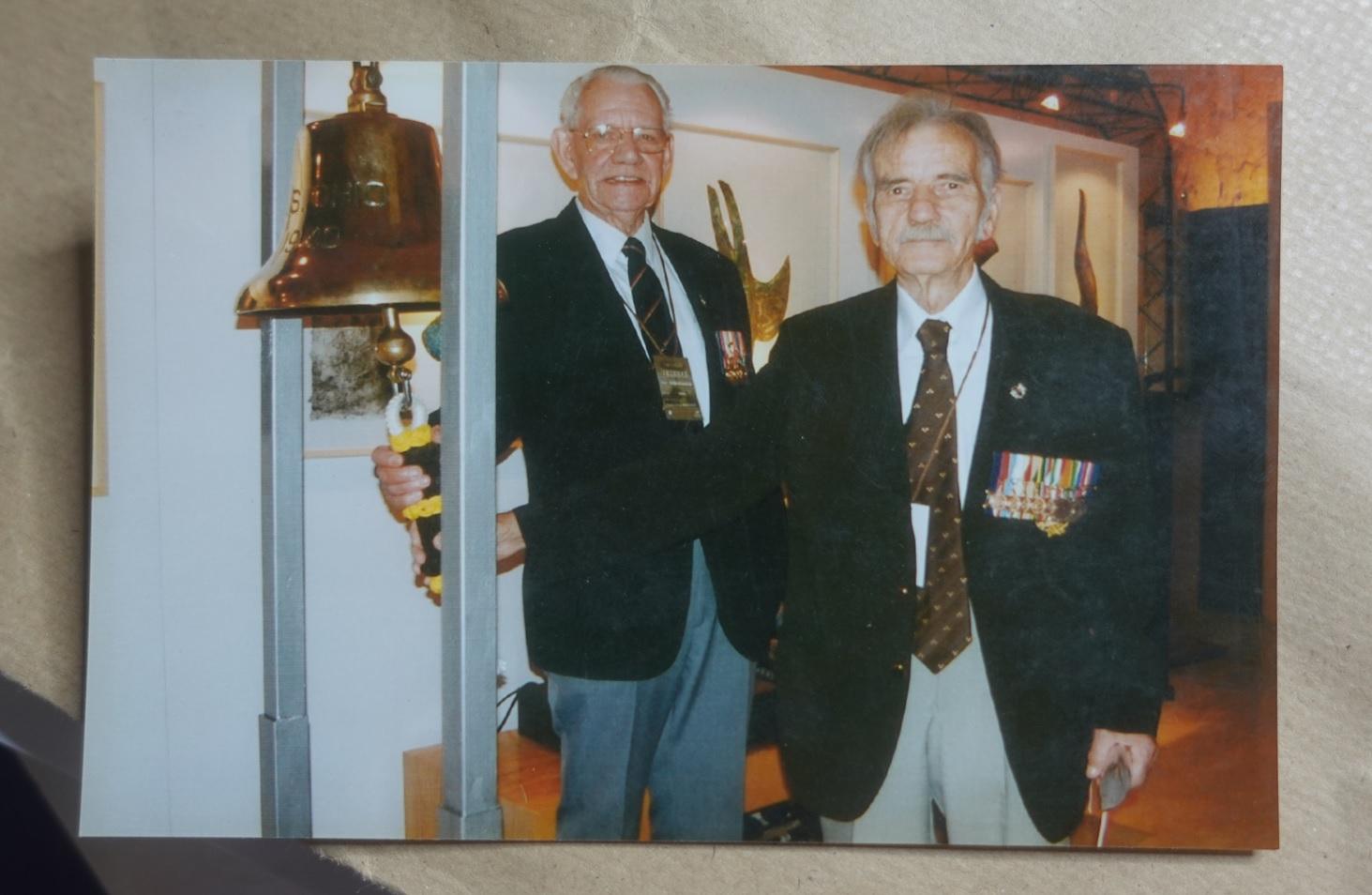 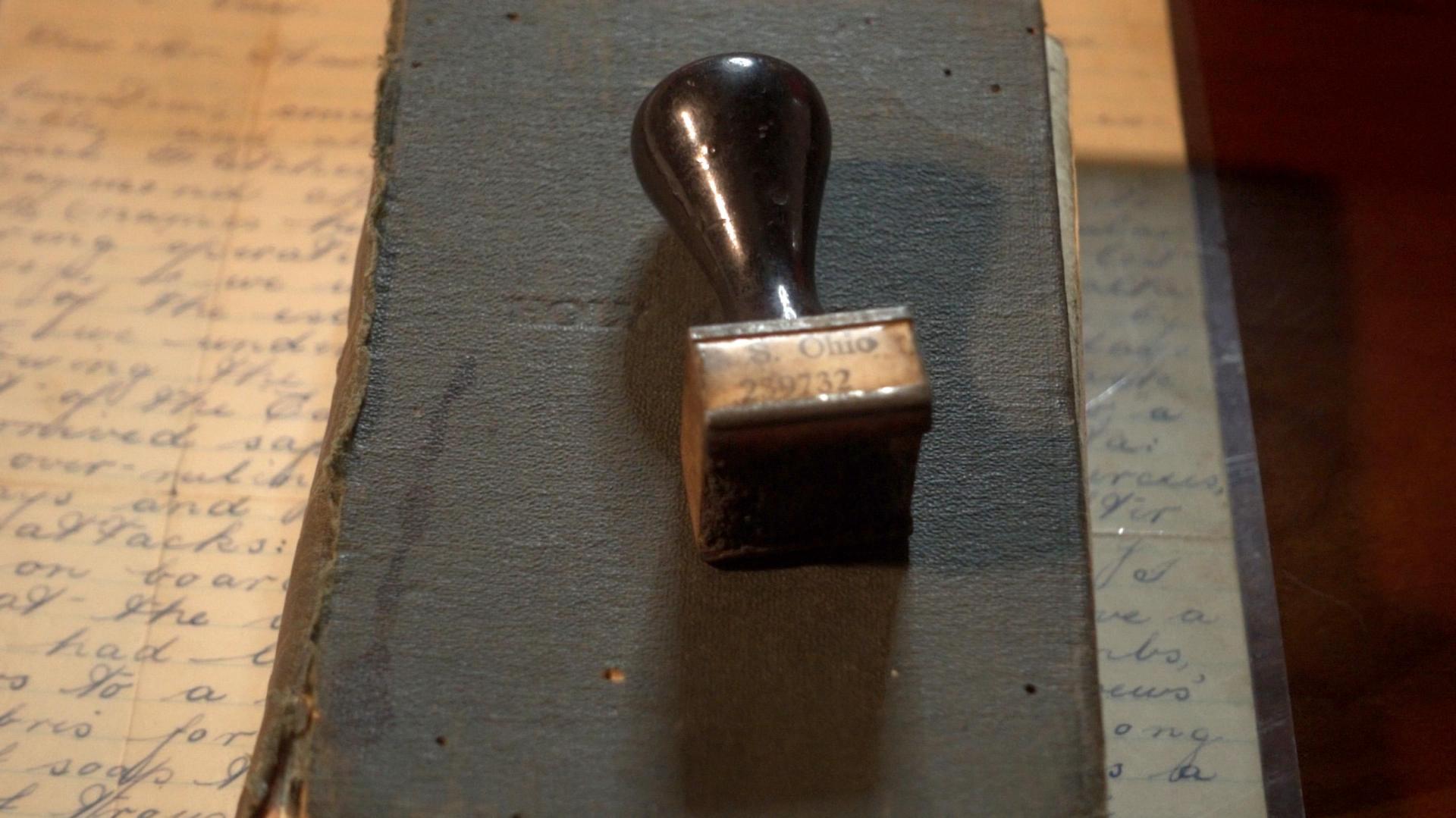 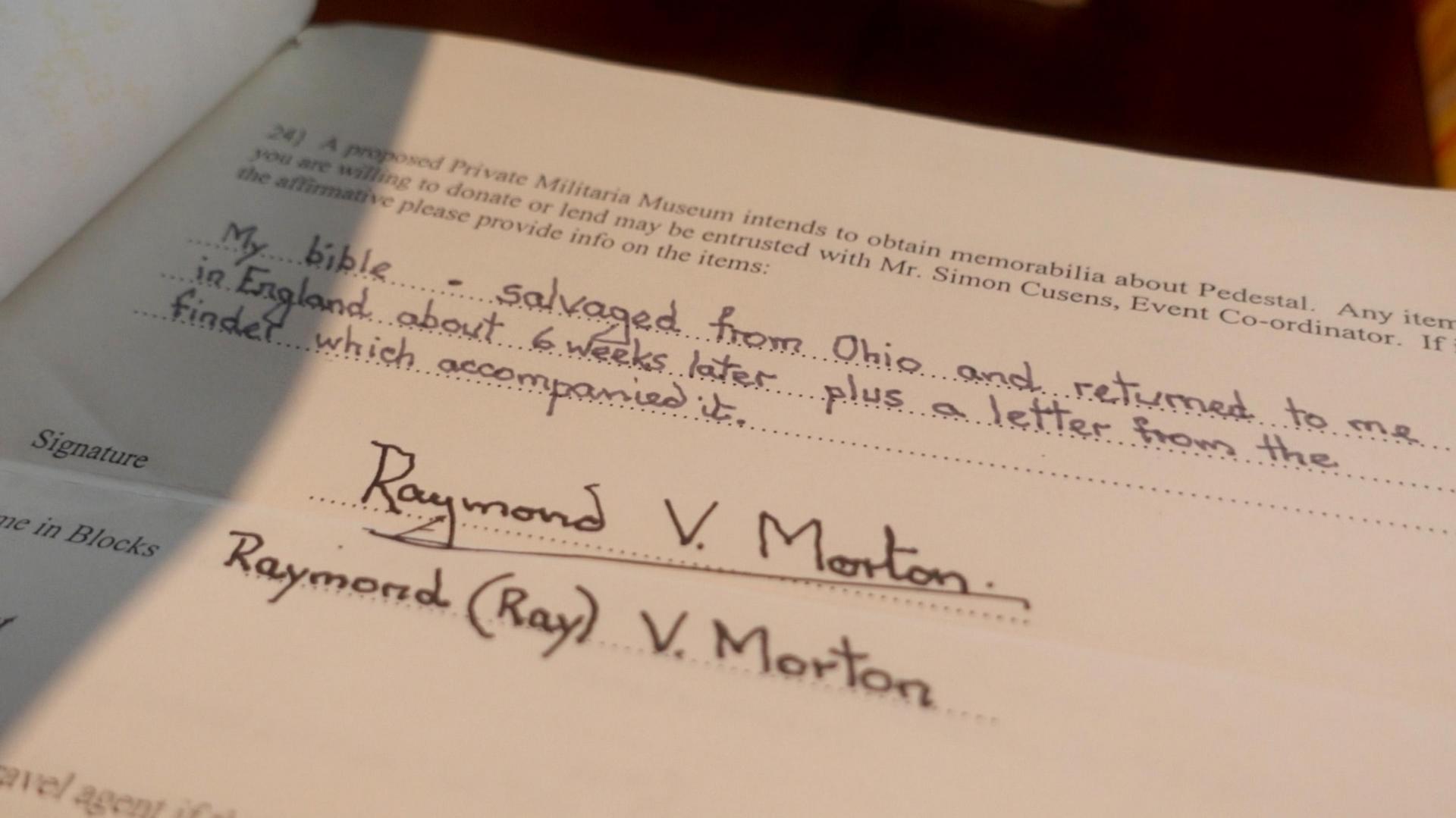 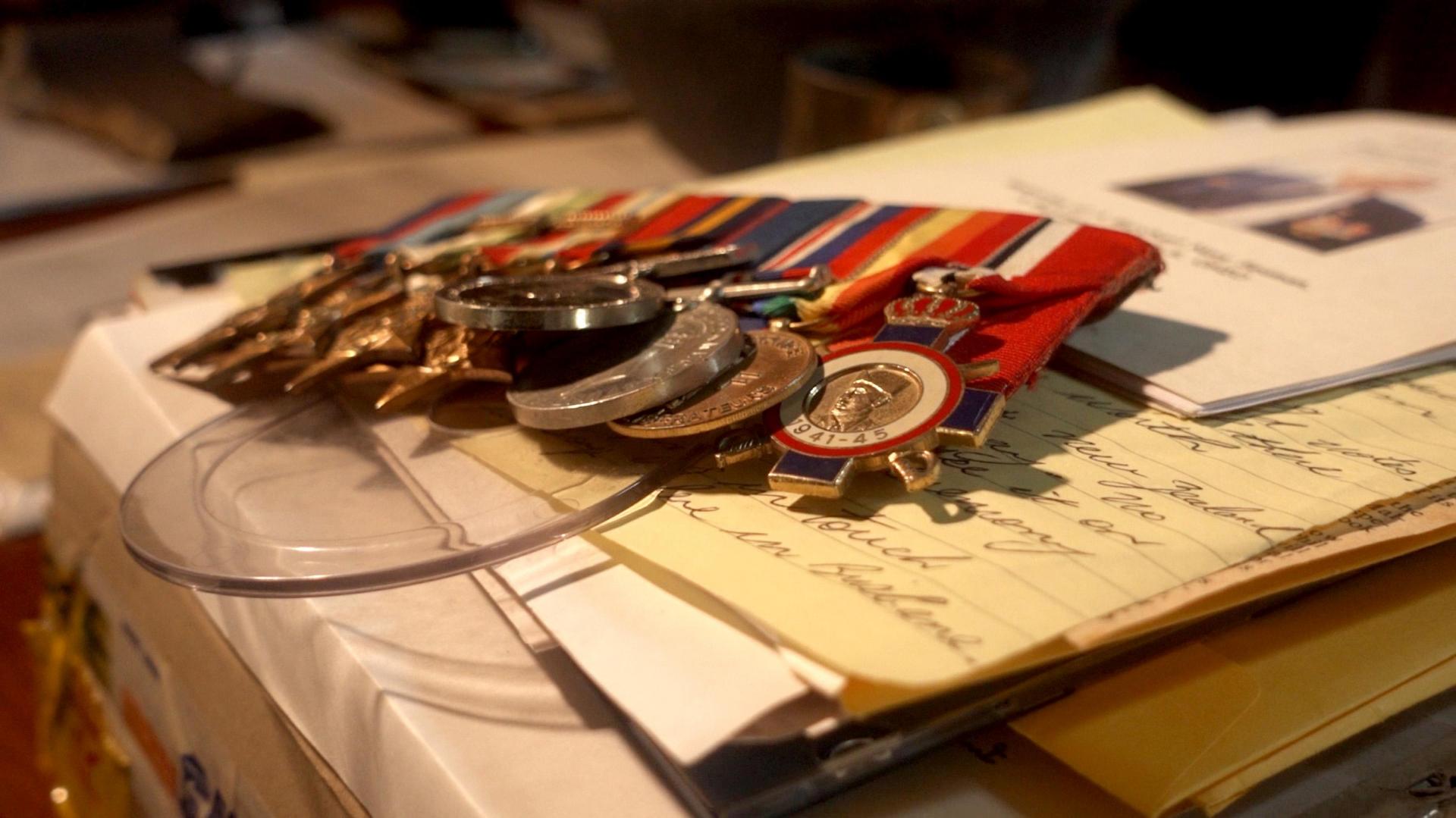 This article is being published as part of a series called Malta’s hidden treasures, a collaboration between the National Archives of Malta and Times of Malta. The project, which forms part of the European Digital Treasures co-financed by the European Union through the Creative Europe program, allows readers to get an insight into Maltese history and society through our archives.

You can discover more in the National Archives of Malta which have headquarters in the historic building of Santo Spirito in Victoria and other archives. If you cannot visit the archives in person, you can access an oral and visual archive online at www.memoria.com

The website is the main repository of recent Maltese national and public memory and hosts hundreds of memorials dating back to the 1920s.

Independent journalism costs money. Support Times of Malta for price of a coffee.

Andrea Prudente: Why one Washington state woman is seeking to repeal the abortion ban in Malta

Unbiased PBS, made in Brussels

‹ Clouds and some clearings: Météo France assessors in Toulouse and Occitanie › The “brightest race” in Portugal returning to Portimão