Dainius Ruževičius, a sports journalist from Panevėžys who won an immigration visa and emigrated to the USA 19 years ago, sees Lithuania beautifying and people doing better every time he comes to Lithuania.

An emigrant comparing life across the Atlantic and in his homeland is convinced: in Lithuania there is more moaning than actually suffering.

Sees the bright side

“People in Lithuania complain more than things are really bad. It would be enough to remember how they lived ten years ago. The mere fact that Lithuanians can now afford vacations in Turkey, the Maldives, and travel around the world shows that life has really improved,” says Dainius Ruževičius, a sports journalist from Panevėžys who emigrated to the United States 19 years ago.

After winning an immigration visa – a green card – in 2003, the then “Sekundė” correspondent and his wife went across the Atlantic to America, which is stereotypically considered the country of dreams.

After five years spent abroad, a daughter was born.

For 16 years, the family has been living in Lemont, which is about 20 kilometers from the center of Chicago, where the largest community of expatriate Lithuanians has gathered.

Dainius also started his life in the U.S. as a journalist in the newspaper “Amerikos lituvis” once a week.

Although over time the paper Lithuanian publication ended its existence, D. Ruževičius has maintained a connection with journalism until now. One day a week, he prepares the sports page in the world’s oldest newspaper, Draugas, which has been published continuously since 1909.

However, journalism is his hobby and passion, but not his livelihood.

In order to support his family, D. Ruževičius works at three jobs.

“By devoting as much time to work in Lithuania as in the USA, it is more Lithuanian to earn maybe less, but according to the price, I would spend less, so I would live no worse.”

Dainius takes out Lithuanian milk and bread products after the trading place. He is not just a driver.

According to the emigrant, only three people work in the company. In Lithuania, probably ten would do that job.

“I myself have to pack the goods and take them out, put them on the shelves in stores, take orders for the next week, collect money – I perform many functions. Therefore, the pace is huge. But what needs a lot of workers, if fewer people can do the job, they will work more.

In Lithuania, a company engaged in this would employ warehouse loaders, sales managers, a driver who takes out goods, and a worker who puts them on the shelf,” D. Ruževičius compared.

On other days, he transports cargo to almost all countries in his own cargo minibus. Only Hawaii and Alaska are laughing before they reach the songs.

“After the USA, I transport wires and cables on an urgent basis. Sometimes, they call in the evening and I sit down to drive 1,000, 2,000, sometimes 3,700 kilometers one way – to Houston, Denver, New York, Portland, and elsewhere.

I drive only to fill up with gasoline. There can be no rest on such a trip – the goods must be delivered to the factory urgently so that there are no downtimes”, says D. Ruževičius.

D. Ruževičius says that he no longer sees such a difference between the quality of life in the USA and Lithuania, which was evident when he packed his bags and went across the Atlantic. G. Kartan’s photo.

Got used to the pace

Songs do not count how many hours the working week lasts.

His work schedule is not fixed. And an acquaintance who owns a flower salon asks him to deliver flowers to celebrating customers during holidays – Mother’s Day or Valentine’s Day.

“I don’t lack activities, only sleep is not enough. But I’ve already faced sleepless nights and accustomed distances,” says the former Panevėžys resident at a great pace.

But Saturday and Sunday belong to the family.

Dainius’s wife, who worked in pizzerias in Lithuania for ten years, got involved in the same activity in emigration. In the kitchen of a Lithuanian restaurant, she prepares traditional dishes: pigeons, zeppelins, chops, soups. Net 80% the customers of this restaurant are Lithuanians who miss the food of their homeland.

D. Ruževičius says that he no longer sees such a difference between the quality of life in the USA and Lithuania, which was evident when he packed his bags and went across the Atlantic.

He says that he himself was stunned when a close acquaintance who works at a hairdresser in Palanga told her that she works for 11-12 hours three to four days a week, and her earnings reach 400 euros per day.

“No Americans needed!” My wife has never seen such money in the US,” says D. Ruževičius.

I was surprised by the prices

Even though the basket of even the most basic and cheapest food products in Lithuania increased in price by 30% during the year, they did not appear to be much for an emigrant who came to his homeland for a month.

According to D. Ruževičius, the same products cost twice as much in the USA, and some even triple.

Dainius, who delivers Lithuanian bread to stores, compares that for a loaf of that type, which costs about one euro in Lithuania, a buyer in the United States pays 3-3.20 euros.

In Panevėžys, a farmer in Dainius asked for a euro for a kilogram of cucumbers at the market, in Chicago you have to calculate about 3 euros for that amount.

“After arriving in Lithuania, the first thing I did was buy a SIM card with a top-up. They say the bus is expensive – 16.80 EUR for a month of unlimited internet, messages and calls. Do you think it’s expensive?” asks the emigrant.

And for those who think it’s expensive, D. Ruževičius reveals how much he pays for his family of three for a mobile connection – about 130 euros per month.

He does not change the prices of food in the cafes of his hometown.

“In Panevėžys, four friends and I had dinner at an inn. We ate a Chičinska steak from Panevezys and drank ten glasses of beer. We all paid 53 euros together. They would have paid about 120 euros to ensure that in Chicago,” the emigrant calculated.

The songs are not hidden: when they start talking about the prices, the most common argument put forward by friends in Lithuania is that they earn several times more in the USA.

He counters that the statistical population of the USA is forced to spend much more.

“For us, the price of fuel is about 1.5 EUR per liter. I see that it is more expensive in Lithuania. I asked my brother, how much does he spend per month? He calculated that mostly, it is not only to work, but also on the way, for a ride to the garden, which he spends about 300 euros. My monthly fuel costs are more than 2000 euros. When transporting goods, I pay from my own pocket, not the company, besides, the distances here are such that even for family needs, we use much more fuel than a statistical resident of Panevėžys”, Dainius compared.

Electricity in the USA is almost three times cheaper than in Lithuania – approximately 10 cents/kWh. However, Dainius, being a statistical resident of the USA, pays about 250 euros per month for electricity alone in the summer.

“My cottage, like everyone else’s house, has air conditioners. It is particularly hot in the summer, they spin non-stop and consume a lot of electricity,” says the migrant.

In the cold season, almost a similar amount has to be paid for the heating gas of the house. 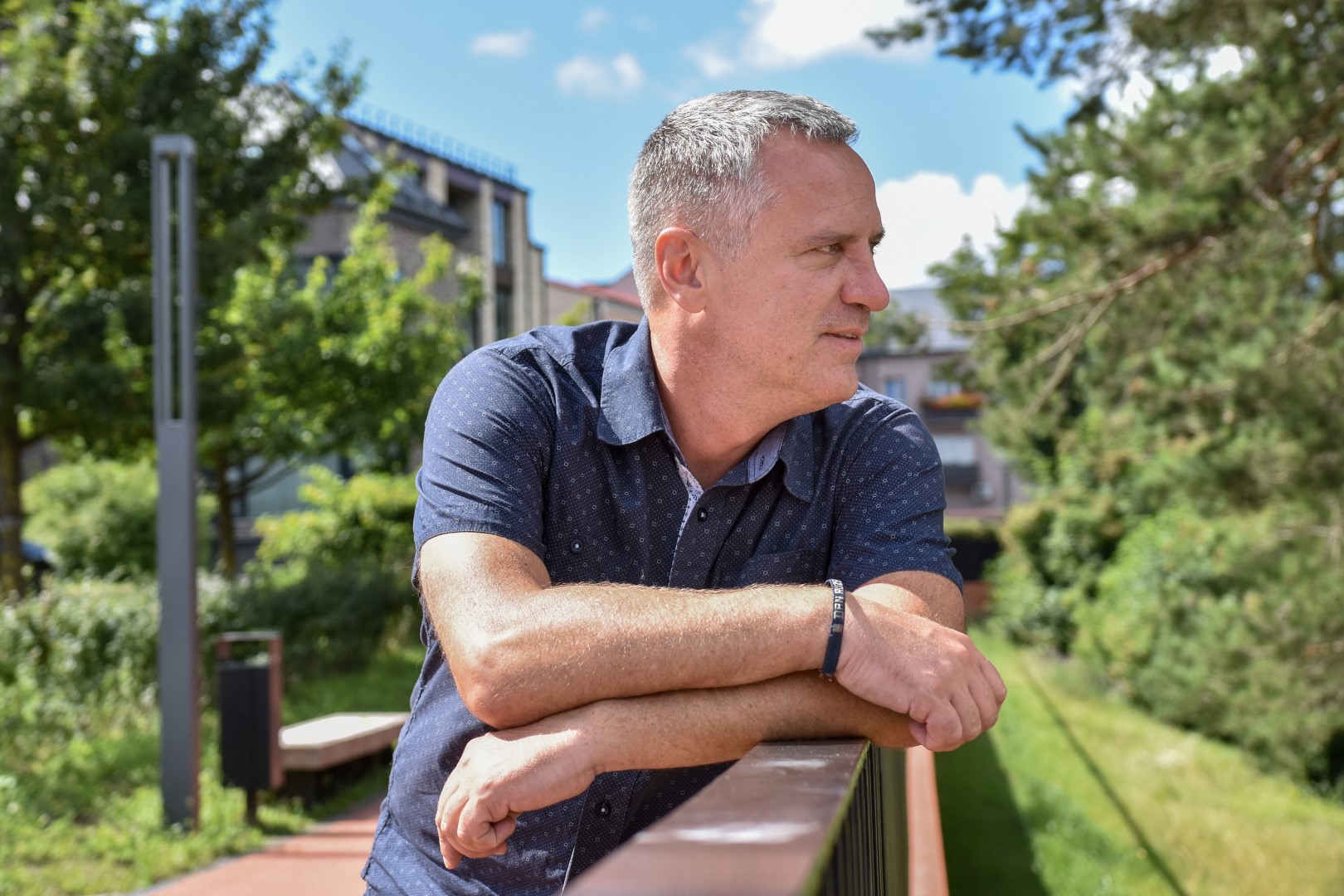 On his way back to Lithuania, Dainius says that every time he sees it more beautiful, and the people doing better. G. Kartan’s photo.

One hand gives, the other takes away

According to Dainius, it is already the case in the USA that one hand gives and the other takes away.

The former resident of Panevėžys estimates that he spends 50% on household taxes alone – for electricity, water, environmental management, garbage collection, mobile communication, where he took out a home loan 16 years ago, gas, payments for two car loans and their insurance. family income.

“The loan installment alone, taken at 30, amounts to 1,650 per month of housing. There are still 14 years left to pay,” said D. Ruževičius.

And garbage collection costs a Lemont resident $78 for three months. Currently, 1 US dollar is equal to 0.98 euros.

Another pain in the US is extremely expensive health insurance. From a certain income limit, the USA guarantees a citizen free insurance, so in America it is kind of easy to hide one’s income completely. Especially since in the US it is not forbidden to pay salaries in cash.

Dainius laughs that even when he is on vacation in his homeland, he cannot turn off the calculator in his head. And my wife reminded me by sending an SMS: don’t worry – you will have to work a lot when you come back.

Dainis, who spent a month in Lithuania, will somehow have to get used to the pajamas he didn’t get during that time. “In Lithuania, those who go on vacation get a vacation. Neither my wife nor I have anything like that. I don’t know how much we should get to be able to afford the whole family to fly to Lithuania together for a vacation”, says the Lithuanian from the USA.

Of course, according to him, the employees of the company are entitled to two weeks of vacation per year. But for a very large percentage of US citizens, paid vacation is a luxury.

Would live no worse

On his way back to Lithuania, Dainius says that every time he sees it more beautiful, and the people doing better.

An emigrant who visits many acquaintances and friends in Lithuania claims that he can see perfectly – what, it’s not bad and he lives.

According to him, the mere fact that Lithuanians can now afford vacations in Turkey, the Maldives, and travel around the world shows that life has really improved. According to D. Ruževičius, when he went to the USA two decades ago, he could not have even dreamed of such trips for the salary at that time.

J. Dedela. It is the most difficult in Europe for small and medium-sized businesses to survive in Lithuania