The time to act is “Now” – Liechtenstein

When Greta Thunberg protested in front of the Swedish parliament in 2018 with her “School strike for the climate” sign, she catapulted the issue of sustainability into the minds of young people and children worldwide. In Liechtenstein, however, a youth association has been campaigning for the switch to renewable energies for ten years and is now making an appeal to society.

A possible photovoltaic obligation (PV obligation) and the ban on gas and oil heating are the subject of controversial debates in the state parliament. Namely by 25 politicians who are on average over 50 years old. When it comes to sustainability and green energy, wouldn’t it be important to involve young people and children in the discussions and decisions? After all, it is about a future that affects them, their children and grandchildren.
First of all: many young people and young adults have a clear position on this. For the “JugendEnergy” association, which emerged ten years ago from an initiative of youth participation in Liechtenstein (Jubel), the hotly debated question should no longer be asked: “The PV obligation is a must from our side,” says this Board member Julia Frommelt. Because despite funding offers, there are still far too few PV systems on Liechtenstein’s roofs.

A lot achieved, more to come

And that was exactly the reason why the youth club was founded in the first place ten years ago. During an exchange event, a group was formed that was interested in the topic of sustainability. “The result was the first project – the photovoltaic system on the post office building in Schaan – and the founding of the association,” explains Frommelt. The association has set itself the goal of installing as many PV systems in Liechtenstein as possible together with young people.
In 2012, the first system was installed by the youth group in Schaan and four have been added to date – at the association for assisted living in Triesen, at the Waldorf school and the Resch primary school in Schaan and at the Aeule primary school in Vaduz. These five systems would have produced almost 150,000 kilowatt hours (kWh) of electricity last year, which corresponds to the consumption of around 37 single-family homes. And actually, the association would like to equip even more roofs with photovoltaics. Motivated school classes and youth groups are already ready for projects again, but there aren’t enough homeowners who would agree to implementation with young people. “There are still a lot of vacant roof areas in the country where we would like to contribute to the construction of a photovoltaic system – we are open to all forms of cooperation, as long as young people are involved,” says Frommelt.

The young people installing the PV system at the Aeule primary school in 2020. (Photo: ZVG) 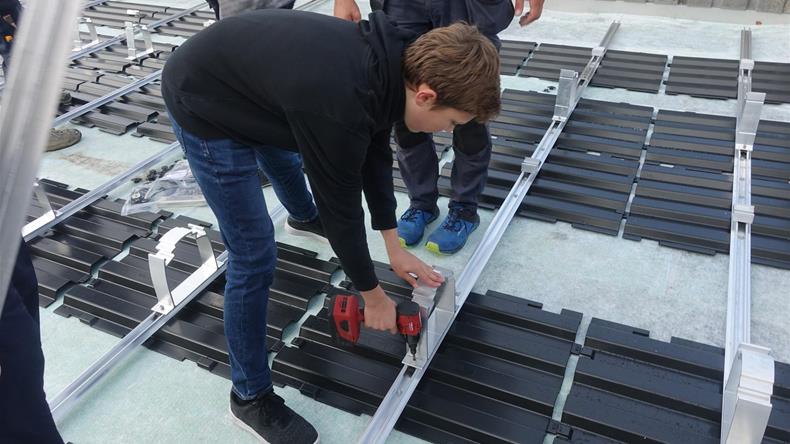 The young people installing the PV system at the Aeule primary school in 2020. (Photo: ZVG)

give adults a nudge

The awareness of renewable energies in society has increased significantly in recent years, which pleases “JugendEnergy”. Especially since the pandemic and the outbreak of the Ukraine war, people have increasingly dealt with the energy supply. Nevertheless, there are still many prejudices against sustainable energy production. And the club wants to counteract that. Since this year, the modules “1×1 of saving energy” and “The ecological footprint” have been offered at primary schools in order to promote awareness even among the youngest.
One or the other may be surprised that the association focuses so strongly on children and young people. Now this seems to be exactly the recipe for success of “JugendEnergy”, because after all a group of committed young people started the matter ten years ago without much debate or politicizing. According to Frommelt, the projects with classes and youth groups have the advantage that you can get started straight away and everyone can lend a hand: “In this way, we create awareness among the young people that they too can make a difference and don’t have to wait for politicians and the adults agree on a solution.» And through this commitment, a rethinking can also be initiated indirectly among the adults. At home, children and young people talk about their experiences and what they have learned about renewable energies.

The youth club understands that such a rethinking in society takes time. In his opinion, however, a primary requirement could also make a contribution and, to a certain extent, force people to be happy. Because, Frommelt is certain, with the mandatory installation of a PV system, people would automatically think about renewable energies and thus recognize their advantages.
Ten years later, the association will continue to actively contribute to making Liechtenstein more sustainable. That is why even more PV projects are to be implemented with school classes and apprentices, and the “Youth Energy” primary school workshops are to be used to show as many children in the state as possible how important renewable energies and saving energy are in and of themselves. Because in addition to sustainable energy generation, it is important to understand that the best energy is the energy that is not used in the first place.
As ambitious as Liechtenstein’s climate targets for 2030 are, Frommelt says they can be achieved if everyone pulls together. It is now high time to recognize the seriousness of the situation and to realize that the problems cannot be solved by waiting and watching. Action would have to be taken now “so that the next generations will also find a planet worth living in”.