The memorial bell for Prague is ready. A memorial to the Nazis of the melted bells is waiting to be transported to Prague

photo: archive of Sanctus Castulus/Bell Cemetery on Rohan Island in 1942.

Bell #9801, which is supposed to be a reminder of almost ten thousand bells that the Nazis had melted down for material for weapons production during the occupation, is now ready. The ringers cleaned it, fitted it with a head and also tested its sound. Now the memorial bell is only waiting to be transported to Prague. He should arrive in the metropolis during August.

The non-profit project, which is supposed to symbolically commemorate the aforementioned historical events, has reached the final stage. “The bell is complete. The ringers cleaned it, mounted the so-called head and heart and performed a tone test. At the moment, the bell is packed and is only waiting to be transported to Prague, which should take place in August this year,” says Ondřej Boháč on behalf of the Sanctus Castulus association, of which he is the chairman.

It was this association of bell ringers that initiated the creation of the bell and also organized a public collection, in which about 75 percent of the price of the new bell has been collected so far. “Although the bell has not yet been paid for, based on mutual trust, her workshop has already handed it over to us. It will arrive in Prague by the end of August, when it will ceremoniously live on the Smetana embankment,” one of the members of the association told PrahaIN.cz.

The symbolism is getting stronger with the war in Ukraine

He also noted that the bell ringers themselves, the brothers Johannes and Peter Grassmayr from the famous Austrian bell ringing dynasty, value the project of the Czech bell ringers immensely.

Already during casting, Johannes Grassmayr appreciated the idea with which the association from Prague came to him. “We are fascinated by the idea of ​​making chimes lost during the Second World War,” a ČTK source said at the time. In addition, according to him, the importance of a similar project has been strengthened by international developments in recent months. “None of us could have guessed that a war would break out in Ukraine. This gave this bell a much greater symbolism than it had just a few months ago,” added the descendant of fourteen generations of bell ringers from Innsbruck. Among other things, it has in its portfolio the largest functioning church bell in the world, which is in Bucharest, Romania.

The bell for Prague, which bears the number 9801 in its surname, commemorating the number of bells seized by the Nazis during the protectorate of Bohemia and Moravia, should have its place on Rohanské ostrov in the future. The current development project of the capital city in the locality is also counting on its location here, which it assumes in 2024. “It was here that confiscated bells were collected during the war, which then traveled down the river to factories in the then Third Reich, where they were melted down as part of weapons production. In this regard, the new bell also has a symbolic weight of exactly 9,801 kilograms,” one of the members of the Sanctus Castulus association told PrahaIN.

The bell is now complete

“The surface treatment of the bell, which was cleaned, described and finally finished, including the reliefs that decorate its surface, is complete. “A wooden larch head has been mounted on the bell, from which it will be hung. A tone test was performed, which turned out excellent. The casting is of very high quality and, according to bell ringer Peter Grassmyer, the sound of the bell is extremely successful,” added Ondřej Boháč, adding that the heart of the bell is made of steel and weighs approximately 400 kilograms.

The bell itself, designed by the pair of bell ringers Kryštof Čižinský and Jakub Kamínek, was cast from alloys consisting of 78 percent bronze and 22 percent tin. It was cast on Friday, June 10, and has been cooling in the so-called casting pit ever since. When picked up on June 23, it was still around 70 degrees Celsius.

The bell measures 187 centimeters and the main motif of its decoration is “the rebirth of the old and the destroyed in the new”. The mantle is decorated with fragments of bells that were used in the arms industry during the destruction of the war and the surrounding countries.

The collection for the financing of the memorial bell continues, according to PrahaIN.cz information from the Sanctus Castulus association, it will continue with the fact that the collected funds should also help save the bells in the Czech Republic in the future. 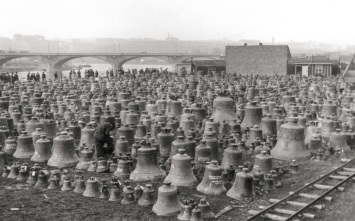 PICTURE We know the final shape of the bell that the Zvon #9801 initiative intends to make and place on Prague’s Rohanské ostrov. It is meant to be a symbolic replacement…

A total of 9,801 bells were silenced by the Nazis during World War II. They were seized, melted down and processed into weapons and ammunition. Bell Initiative #9801…