“According to the conclusions so far, the cause was damage to the insulator of the traction line. in addition, the influence of extremely high temperatures cannot be ruled out either,” said spokesperson (SŽ) Dušan Gavenda. According to him, SŽ will in this case apply advertising to the construction contractor.

We wrote about weekend problems here:

There were problems again on the Ostrava-Prague line, trains were up to 150 minutes late

However, the problems on the track, where reconstruction is already underway, continued on Sunday, when the train driver apparently did not respect the signal for electric operation and the locomotive was damaged by the collector.

“In connection with the emergency and non-respect of the withdrawal of the collector, the railway administration proceeded to change the technological procedures during the construction. From Tuesday until December, there will be no so-called voltage-free section in the Bezpráví section,” said the SŽ spokesperson, adding that electric locomotives will therefore not have to pull the pantographs when passing through the area.

The main corridor to Ostrava was once again at Brandýs, trains were up to 150 minutes late

At the same time, there has been a long-standing debate in the ranks of train drivers over the withdrawal of collectors. “It’s never happened to me personally. It is true that we have an obligation to monitor the condition of the traction line, but in the chaos that train drivers experience in places affected by the lockout, it is difficult,” said train driver Matěj Novotný.

too many train drivers welcome the decision, but claim that SŽ is coming up with a solution too late. “As train drivers, we often ask why? Why didn’t the Railway Administration take such a step right away?” asked the orator Vojtěch Jirman, the driver of the withdrawal, according to whom there should not be collectors on the track at all. 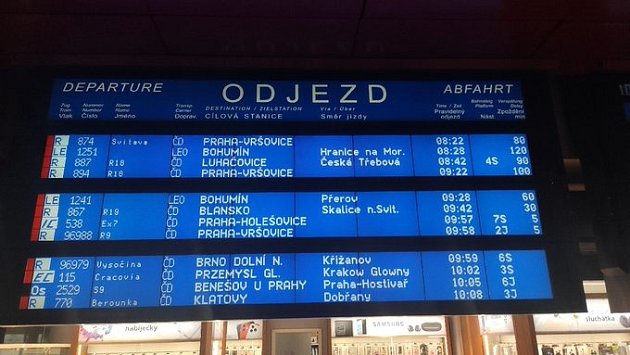 “This would prevent errors and the subsequent stoppage of operations in the order of hours. The railway administration claims that the fault is on our side, but unfortunately it is against this,” added Jirman.

According to Jirman, events like the one that happened near Brandýs nad Orlicí on Sunday are a problem mainly for freight transport. “Passenger traffic gets knocked around quite quickly from traffic stoppages, but I suffer from the lockout itself and the stoppage of traffic many times more. It may take several days before it starts again,” Jirman said.

Comparison of gasoline prices in the MS region: See where they already start with three

However, many passengers also had wrinkles on their foreheads during the weekend. “I was coming from Prague, first we were stopped in Přelouč, where we waited for about an hour. Then they let the train continue and informed us that in Chocna we had to change to a bus to Česká Třebová. It was packed to bursting. In total, I arrived two hours late,” said one of the passengers.

České dráhy also responded to the emergency situation, providing at least partial replacement transport. But that was nowhere near enough. “In the section, we managed to secure seven buses for passengers passing through the place with transportation. Due to the importance and load of this railway corridor, bus transport can only partially replace trains,” said Petr Šťáhlavský, spokesman for České drah.

Modernization of the track in the Tiché Orlice valley in photos:

Passengers who encountered problems on the track at the weekend are entitled to compensation. “In this case, they had a number of options for moving forward. For example, to move further away and could return to the boarding station. In that case, we will refund the full price of the fare,” said Šťáhlavský. If you do not want to pay to return to the boarding station, they are entitled to payment of money for the section not taken.

“They could of course continue their journey, in which case they have the option of claiming so-called compensation due to the delay of the train,” Šťáhlavský added. In this case, the amount of compensation is determined by the time of the delay. For example, if the train is delayed by 60 to 119 minutes, passengers are entitled to 25 percent of the fare price.

‹ By bike from Brescia to spread the message of Peace in the territories of Rimini and San Marino › Pierre & Vacances grows in Andorra: adds 11 establishments