An ultimatum to the leaders of “AMNESTY LITHUANIA” – they must resign, as the Ukrainians did

August 11, 12 p.m. The People and Justice Union is preparing a picket at the Ministry of Justice regarding the events carried out by Amnesty Lietuva in Lithuania, Vilnius, Gediminos Ave. 30.

It will be required that the founders of “Amnesty Lietuva” publicly support Ukraine.

It is also demanded that the Ministry of Justice does not allow the future registration of such institutions that hide their sources of income, location, management and contacts, thereby violating the laws of the Republic of Lithuania.

“Currently, the prevailing opinion in Lithuanian public space is that Russian fascism and leftism in the West are two alternatives from which to choose.

During the Russian regime’s war against Ukraine, it became clear that the most globalism, genderism and cosmopolitan support was declared internationally by public Western organizations and “moderate” Russian aggression, and often openly pro-Kremlin, obediently repeating what the propaganda declares.

Some of these organizations no longer hide or shame, and act as agencies carrying out the orders of the criminal Kremlin regime. One of these is the supposedly “human rights” organization “Amnesty International”, which a few days ago made public an essay about its “investigations” in Ukraine, which it proudly called a report.

This organization strongly condemned the detention of illegal migrants in Lithuania sent by the Belarusian dictator Alexander Lukashenko, subordinate to the Kremlin, in 2015. called the banning of the Communist Party in Ukraine a violation of speech and thought, and now blames the Ukrainian military for civilian deaths in their country of freedom.

The responsibility for these deaths is cynically shifted from the aggressor Russia to the Ukrainian fighters heroically defending their nation. The researchers see that Ukrainian soldiers are stationed in civilian facilities while defending the cities from the occupiers, even though there are forests and swamps next to these cities. Investigators have found bullet holes in empty war zones in Ukrainian schools.

These statements are not only scandalous, ignorant, but also create a false impression, because even in defensive battles, Ukrainian soldiers avoid fire on civilian objects, when the Russians have the advantage, sweeping everything in their path.

In this way, Amnesty International supports the Russian occupiers in Ukraine, helps the occupiers’ military aggression, and justifies their crimes.

The time has come to say: stop serving the Kremlin under the cynical cover of “human rights”! Time is a parody of who does it out of stupidity, and who – as in the case of German Ex-Chancellor Gerhard Schröder – consciously and selfishly.

We invite you to participate in tomorrow’s picket”, – reads the notice to the public of the People and Justice Union (centrists, nationalists).

Experts.eu recalls that Amnesty International receives funding from many governments and international structures. Among them are the US State Department, the British authorities, the European Commission. According to media reports, community billionaire and the authority of Lithuanian territorial administrators George Soros also provided funds to Amnesty International through the Open Society Fund.

AMNESTY INTERNATIONAL UK: Ukrainian military equipment has been placed in schools and hospitals 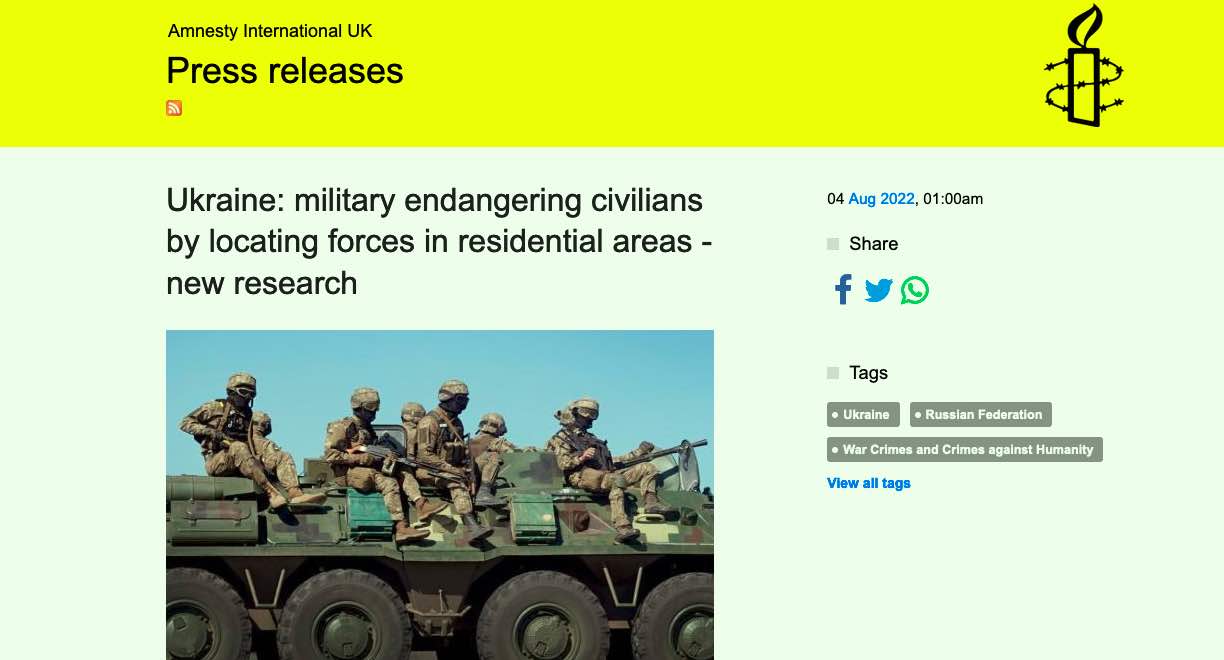 “Ekspertai.eu” publishes a prohibited means of informing the public in order to write the consent of VšĮ “Ekspertai.eu”, which can be obtained at [email protected]

‹ New MPM for SAFP in Monaco › Sanctions are a consequence of the catastrophe in Russia, showed Yale University