Enrichment on the bones

Here is a typical case. A resident of the city is naively looking for his stolen “buggy”, which looters pulled out of a stolen garage and taken to Donetsk.

Do not pass Everything goes according to plan in Russia: the trouble is that the plan is complete bullshit

A resident of Mariupol hopes to find his “buggy”, which was stolen by Russian marauders / Photo from Facebook Denis Kazansky 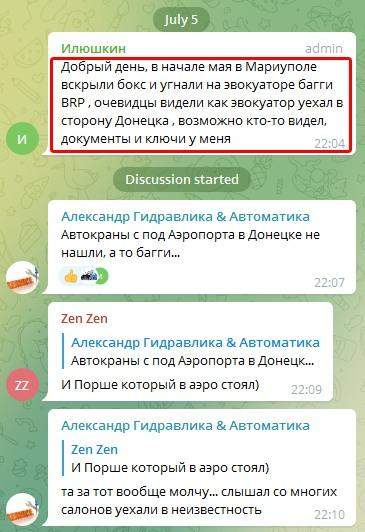 In response to the author, that this happened completely, and it is unlikely that it will be possible to return the car, because in Donetsk they cleaned out all the car dealerships and did not return the stolen goods. In addition, the car could generally take to Russia, but you won’t find it there.

“Russian world” in all its beauty. No matter how much the Russians cover themselves in Ukraine with some kind of elevated glucose level, the main goal for them is just such a brazen and outright robbery of the local population. Yes, yes, the same Russian-speaking audience that places go to.

If you see surnames and first names in small letters in our news, this is not a mistake, but the position of the editors regarding the acts of terrorist states and many people who supported a full-scale invasion of Ukraine.

The important thing is that the Russian occupiers make cozy Mariupol: watch the video

Russian superfood back around the world. Worth a penny

‹ Thessaloniki: Meeting of K. Zervas with G. Smyrlis › Undeclared work does not impoverish: Moldova misses over 15 billion lei in budget annually due to envelope salaries