Ships, power and containers. Slovakia has its own quay in the Polish seaport – Companies and markets – Economy

The port of Szczecin in Poland.


We visited the Polish port in Szczecin on the occasion of the 9th International Maritime Congress, which is the largest event of its kind in the country with hundreds of participants from Central Europe to the United Kingdom.

We also sailed around the former Czechoslovak embankment, which was divided between the Czech Republic and Slovakia three decades ago. “In the Slovak part, we mainly transport steel, aluminum and cellulose,” the guide explained to us, adding that the volume of transport increases every year. In 20021, according to port statistics, it was 362,000 tons, this year the figure is already around 400,000. After Germany and the Czech Republic, we are the third largest client of the port.

A small player with a big challenge

The port in Szczecin specializes in the handling and storage of containers, steel products, oversized cargo, paper and cellulose. It also handles dry bulk cargo – such as coal, coke, aggregate, grain, fertilizers and liquid cargo, including those that require special storage conditions and handling, such as tar.

As part of the development and new investments, the port embankments will be modernized and there will be a new cargo body, namely the Dębicki channel and bulk cargo in the so-called Kashubian pool. The embankment will be deepened to 12.5 meters, which will allow the transport of larger volumes of cargo. Today, the Szczecin terminals handle only ships with a draft of up to 9.15 meters and a cargo of 25-30 thousand tons. New investments in the port of Szczecin to hold ships with a load of 45-50 thousand tons and a draft of 11.0 meters.

There is also an LNG terminal near Świnoujści, which is also connected to the Baltic Pipe project importing gas from Norway, and soon a new gas pipeline will be connected to our territory as well. The current capacity of the Świnoujście terminal is over 5 cubic meters of gas per year, which is as much as the whole of Slovakia consumes. However, according to the energy industry, it will only be attractive for our market in a few years, if it expands. Occupied Poland currently has it supplemented for its own consumption.

The port of Szczecin in Poland

Szczecin Port is a Polish seaport and deep-water port in Szczecin, Poland. It is located by the rivers Odra and Regalica in the valley of the lower Odra, near the Štětín lagoon. It is part of the complex of Szczecin and Świnoujście ports, which are managed by the company and together form one of the largest universal port complexes in the Baltic Sea. 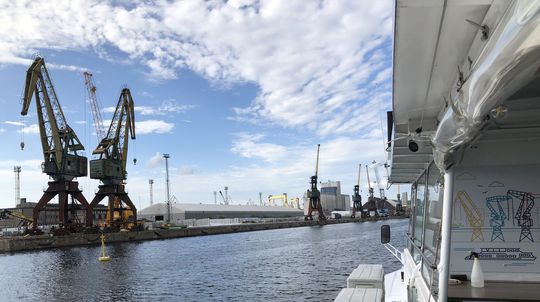 ‹ Nicolas Revel replaces Martin Hirsch at the head of the AP-HP › Luka Doncic shares pun on Instagram after nailing a Skyhook against Sweden in the World Cup qualifier: “Do you want some Kareem with it?”