When in November 2010, the “French gastronomic meal” was inscribed on the list of the intangible cultural heritage of humanity, the idea arose of creating somewhere in France a city of gastronomy which would highlight this famous meal and a call for tenders has been issued to local authorities. Dijon was one of the candidates and finally in 2013, his project was selected. 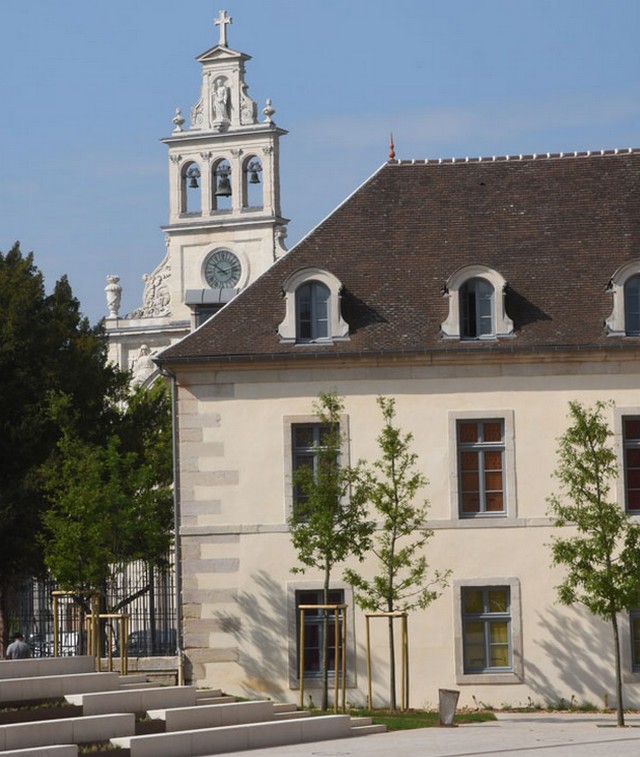 Among the driving forces, Dijon was already kilometer zero of the climates of Burgundy, and Dijon had a vast area of ​​more than 6 hectares to renovate on the edge of its historic center.

It was the old Sainte-Anne general hospital whose permanent closure was scheduled and whose move to the brand new CHU of the François Mitterrand hospital was in progress.

From the outset the idea was to associate the state, the region and the city with the private sector to renovate this vast wasteland, preserving all the heritage buildings, while eliminating a certain number of structures raised over the years without any architectural interest, which would leave enough room to build this City of Gastronomy and Wine, the CIGV, the future engine of tourist attraction for the city. 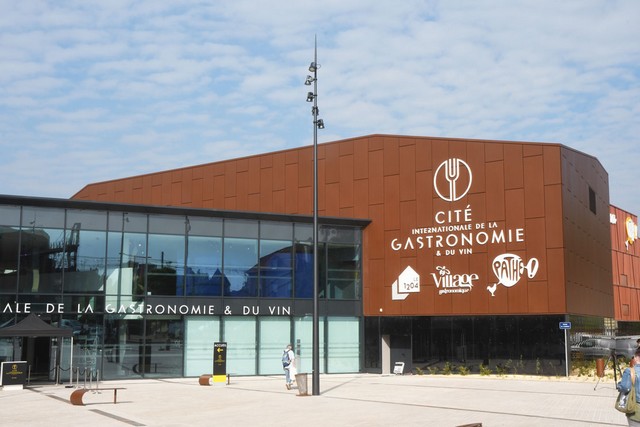 The preserved buildings will house a 4* hotel, social housing, offices as well as the Dijon architecture and heritage interpretation center, alongside a vast exhibition hall of nearly 1,750 m2.

Green spaces will be carefully safeguarded and on the edge will rise an eco-district, mainly low-rise apartment buildings.

It is the EIFFAGE Group, which was chosen after a call for tenders, to take charge of this project of 250 million euros of investment which allowed the restoration of the architectural heritage and the construction of the buildings of the CIGV with a rather daring contemporary architecture, like this huge building all in rusty metal which seems to float in the air and which houses the Ferrandi hotel school. 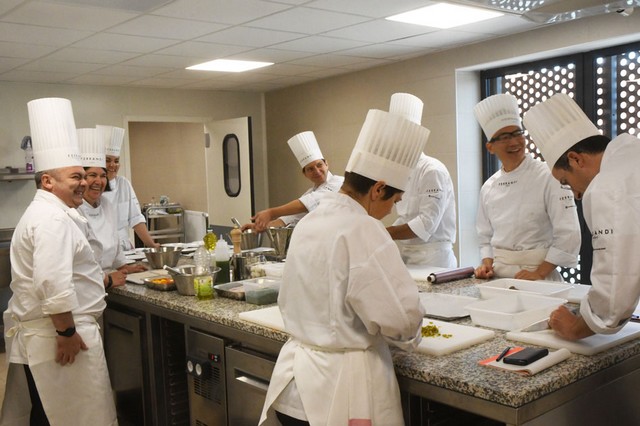 Because as the high point of this project, the city was able to add an additional nugget with the installation in the very heart of the City of Gastronomy and Wine, of the famous hotel school Ferrandi Paris which will create its 5th campus there. A place which, over 850 m2, offers two vast kitchen and pastry laboratories. 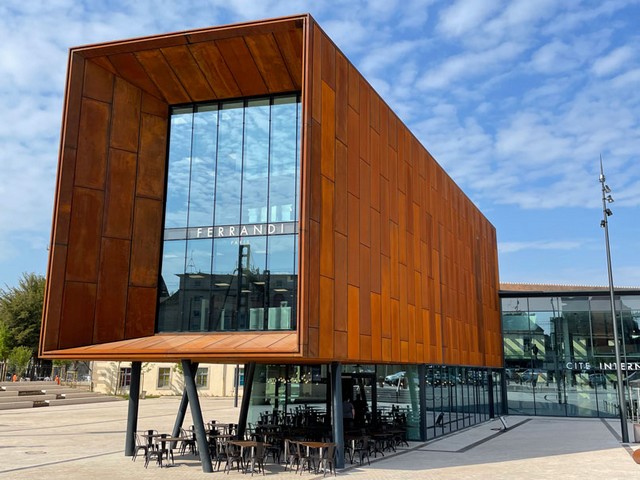 For exactly 100 years, Ferrandi Paris has been a world-renowned school that has seen several generations of chefs, hotel and restaurant managers pass by.

In Dijon, students whether French or from all over the world will have all their courses in English for 4-month training. At the same time, programs are intensifying and short courses will be offered in French for adults wishing to improve their knowledge of cooking and pastry and to master all the technical and professional gestures. 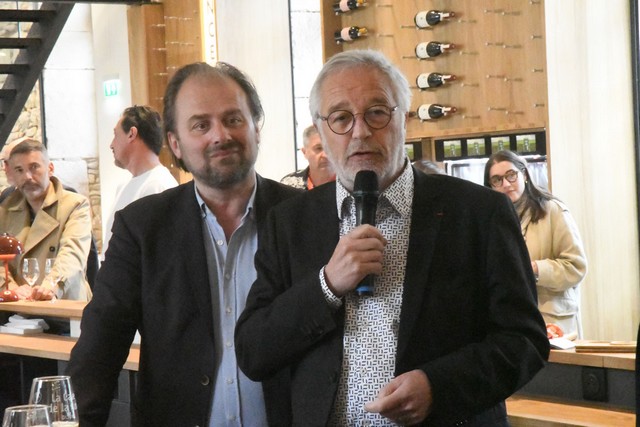 Finally, after a nice obstacle course, on May 6, François Rebsamen, the mayor of Dijon, was able to inaugurate this CIGV which also owes a lot to the work of François Deseille, deputy mayor and vice-president of Dijon Métropole delegate to the CIGV who tirelessly followed this colossal project.

In just a few weeks, the CIGV has seen tens of thousands of visitors pass by, thanks to the many exhibitions and events, the shopping area centered on “eating well and drinking well”, as well as the rediscovery of a historic district. which is also endowed with an ultra-modern architecture.

The shopping district, all dedicated to gastronomy and tableware, is a vast quadrilateral covered by a transparent glass roof, all the shops of which are clad in matt black metal and glass.

There are top-of-the-range food products, fruit and vegetable butchers, bars and restaurants, ice cream parlors and a large part of these shops are dedicated to tableware. There is also a superb bookstore, the Librairie Gourmande, specializing in beautiful books. Another additional attraction for Dijon residents, the CIGV is also home to the Pathé cinema complex with its 9 screens equipped with the very latest technologies of this nascent 21st century. 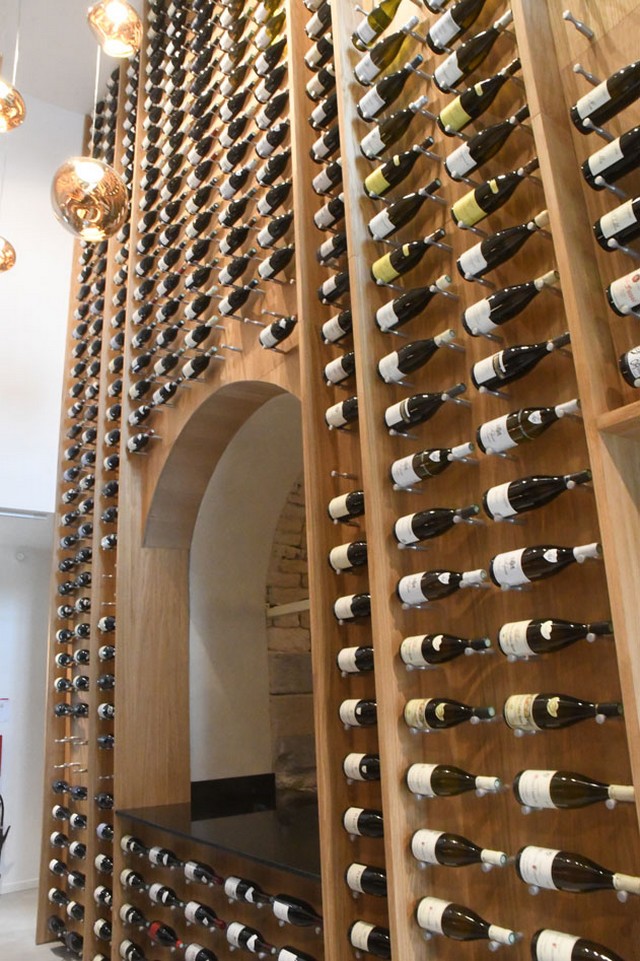 But one of the strengths that bring visitors back, whether they are from Dijon or just passing through, is the “Cave de la Cité”, created by the Epicure Group, where over more than 600 m2, 3 levels including a real vault and a large outdoor terrace extends a space for tasting wine by the glass with more than 3,000 wine references, of which 250 are offered every day.

These wines come from all over the world, with obviously a very important part reserved for those of Burgundy.

Burgundy wines have just over 1,000 references, including many grands crus. This tasting cellar by the glass has state-of-the-art technology that allows everyone to make their choice and fill their glass individually with the help of a pre-purchased magnetic card.

In parallel with the wine distributors installed along the walls, the vast central counter offers the possibility of tasting a range of fresh local products to be tasted on site, a selection specially made by Eric Pras, the 3* Chef of the Maison Lameloise. .

The latter also offers for those who would like to make the most of their visit to the CIGV, to discover the food-wine pairing dinners, which he will offer at the restaurant located just next door “La Table des Climats”, a real gastronomic experience for visitors. The restaurant is also open for lunch.

Among the other activities set up in the heart of the City of Gastronomy and Wine, the BIVB wine school has opened its doors. The BIVB is the Bureau Interprofessionnel des Vins de Bourgogne, and its school will offer visitors small introductory oenological workshops that will allow them to better understand the world of wine. 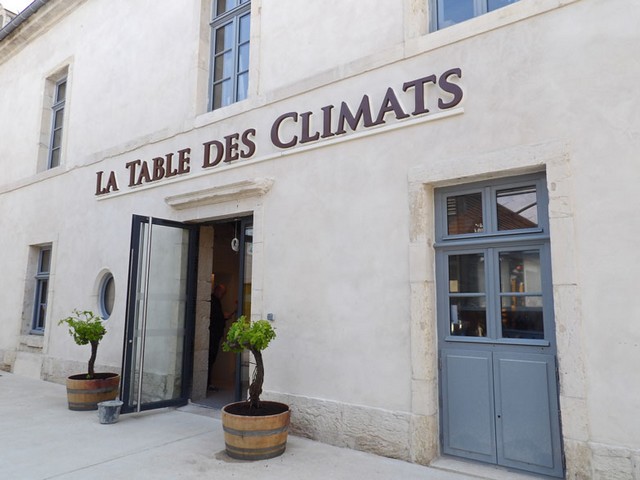 Currently the CICV 4* hotel is still under construction. It will open under the Curio Collection by Hilton brand and will have 125 rooms and will offer a nice spa. And of course it will have its own restaurant and a large bar. Its opening is scheduled for the first quarter of 2023.

To reach the CIGV, Dijon train station and the historic city center are a five or six minute walk away. Public transport, state-of-the-art trams, also serve the site very frequently.

And for those who come by car, a large covered car park has been built on the side of the Cité Internationale de la Gastronomie et du Vin. 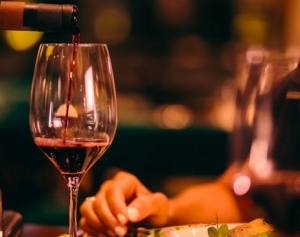 Preparation matches: DIJON and FLEURY win ahead of LE HAVRE and GUINGAMP