While in small cities the temperature differences between the city and the surrounding countryside are insignificant, in large cities such as Prague they are significant. Due to the dense construction and the relatively small amount of greenery, a so-called urban heat island is emerging. 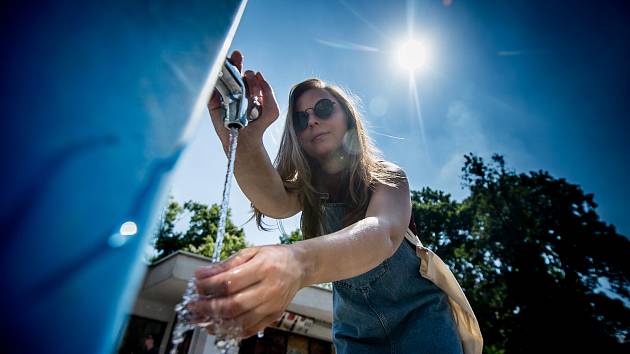 The effect of heat on mortality in Prague in the years 1982–2019 was determined by a study by scientists from the Institute of Atmospheric Physics of the Academy of Sciences of the Czech Republic and the Faculty of the Environment of the Czech University of Life Sciences in Prague. The results of the analysis were published by the specialist magazine Urban Climate. According to the study, the risk of heat-related death in Prague in the past decade was almost twice as high as in the three previous decades. Heat waves represent the most dangerous atmospheric phenomena in Europe in terms of the number of deaths.
The researchers compared the average daily temperatures measured at the Prague-Ruzyne station in the warm half-year (May–September) in individual decades from the 1980s (1982–1989) to the first decade of the 21st century (2010–2019) and their impact on mortality in Prague. “The frequency and intensity of heat waves in the last decade was unprecedented. While the average summer temperature in the 1980s reached 15.3 °C, in the years 2010-2019 it was 16.9 °C and there was a significant increase in such days with an average daily temperature higher than 20 °C,” says team leader Aleš Urban.

Adaptation of cities to climate change

According to Urban, the effect of heat on mortality was clear: while the average number of heat-related deaths in the first three decades was 50 deaths per year, in the last decade there were already 90 deaths per year. “In relative numbers, this represents an increase in the proportion of deaths related to one percent of deaths related to almost two percent of all deaths in the monitored period,” Aleš Urban, noting that the record number of heat-related deaths was recorded in 2015. At that time, Prague reached more than 250 died, which accounted for more than five percent of all deaths between May and September.

According to scientists, it is therefore necessary for cities to adapt to a warmer climate. “For a period of extremely high temperatures, an early warning system should be set up that coordinates the individual components of the integrated rescue system, similar to when floods occur. In the countries of southern and western Europe, similar systems were launched after the hot summer of 2003,” said Urban.

What is the weather like in Prague in the summer?

Unfortunately, a detailed weather forecast for more than 14 days is currently not possible – around 2 weeks in advance, the behavior of the atmosphere is already too chaotic. Although there are also experimental forecasts using climatological models, they do not allow a day-by-day forecast, they only apply the estimated total monthly deviation from normal. “However, in general, in connection with climate change, in recent years we have seen on average higher temperatures compared to the long-term normal, even though the amount of precipitation has not changed much. In recent years, the summer weather has mostly been above average warm, although there have also been colder periods,” adds Mgr. Michael Matějka, meteorologist from the Meteocenter. “It is advisable to move outdoor activities to the evening hours, more pleasant conditions can be found in forests, parks and generally outside dense urban areas, where the heat lasts long into the evening,” he adds.
In cities like Prague, there is no evaporation of water on a dry surface, which can cool the surface. In addition, during the day, the buildings accumulate a large amount of heat, which keeps the temperatures at a high level long into the night, and in part, there are tropical days and unpleasant tropical nights, when the temperature drops below 20 °C.

Wenceslas Square burglary: The repeat offender was overcome by the escalators