Episodic arrest in Thessaloniki: “Will you also die today with me?”…

One of the two police officers who dived into Thermaikos in the morning in order to pull a 22-year-old man out of the water, who tried to avoid arrest, spoke about the unprecedented incident in Nea Paralia Thessaloniki.

The policeman even described to ERT that the young man told him before diving: “Will you die today with me?”

The arrested person, who is also flagged for various crimes, was trying to escape the arrest furiously, already from the moment policemen had handcuffed him and were trying to put him in the patrol car. 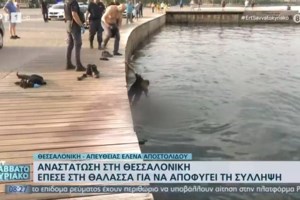 He started running towards the sea, then dove into the water and continued his aggressive behavior even as the police entered the sea to rescue him. As reported by the policeman of Group Z, of the Direct Action of Thessaloniki, Alexandros Sfeliniotis, he had gone to join the policemen of the AT. White Tower, for this reactionary person who had dived into the sea to avoid capture.

“As soon as we arrived we saw that the person was in the sea and because we found that his life was in immediate danger, we decided with my colleague Alexis Mavridis, from the White Tower patrol car, to enter the sea to arrest him, to immobilize him and slowly take him out of the sea to ensure that his life is not in any danger” said Mr. Sfeliniotis, adding that the person was not at all cooperative even in the water and was trying to push the police away.

In fact, at one point, the 22-year-old turned to the police officer of group Z and in broken Greek asked him: “Will you die today with me?” with Alexandros Sfeliniotis answering him: “Your time has not yet come, nor mine, nor yours.”

Thessaloniki has a subway: The video from the tests of the trains – Newsbomb – News

One was dismissed, some others in Thessaloniki are struggling

‹ Trophies, exploits, climbs: in Toulouse, women’s sport had an XXL season › ATP: Thiem meets a qualifier at the start in Salzburg – sports mix