Putin has a problem: Sweden sent more tank killers (like this) to Ukraine

For several hundred years, Sweden and Russia had been regional opponents – and it was only after the Napoleonic Wars ended more than two centuries ago that Stockholm largely adopted its policy of neutrality. Sweden did not take sides during Europe’s world war, and was largely on the sidelines during the Cold War.

However, Stockholm also expected that if attacked, it would probably come from the east, with the Soviet Union wanting to expand its influence to the whole of Scandinavia. With the collapse and dissolution of the Soviet Union in 1991, Sweden’s fears of attacks subsided – only to be renewed as Russian President Vladimir Putin has shown a desire to restore Russia’s ancient glory.

Together with Finland, which had also maintained a policy of neutrality throughout the Cold War, Sweden has been asked to join NATO this week. It is a sign of how dramatically the Kremlin’s unprovoked war in Ukraine has changed the former military landscape in Europe.

On Thursday, the Swedish Ministry of Defense announced that it will send additional anti-tank weapons and machine guns to Ukraine. The weapons packagewhich also includes equipment for demining, is valued at approximately SEK 500 million ($ 49 million).

According to Toni Eriksson, spokesman for the Ministry of Defense, the equipment has been requested by the Ukrainian government and will be delivered “As soon as possible.”

This is the latest military aid package that the Scandinavian country has given Kyiv. Last month, Stockholm announced a change to supply Ukraine financial support and equipment in response to Russia’s unprovoked invasion. As part of that aid package, the Swedish government said it would provide the Ukrainian military with a variety of weapons systems.

“The government proposes that Sweden donate additional defense materiel to Ukraine in the form of the anti-ship missile system RBS 17, anti-missile sniper rifle and ammunition AG 90, as well as another 5,000 Swedish AT4 recoilless anti-tank weapons,” says the Swedish government. Ministry of Defense had announced via a statement.

In addition, Sweden contributed about 48 million euros ($ 51.44 million) to the Bank of Ukraine’s special fundraising account to help the country’s armed forces earlier this spring. The Swedish government had also proposed an additional financial contribution of EUR 55 million (USD 58.95 million) to the fund.

Among the weapons sent will be a secret number AT4 anti-tank missile launcher. The 84 mm (3.31 inches) unmanaged, man-portable, single-shot, disposable, recoilless, smooth-bore armored weapons have already been used with great success to destroy Russian tanks.

The AT4 was originally developed by Förenade Fabriksverken (FFV) and manufactured at their facility in Zakrisdal, Karlstad, Sweden. Now produced by Saab Bofors Dynamics, AT4 is one of the most common light anti-tank weapons used by the military around the world. It can be maneuvered by a single soldier, and depending on the special rocket model, the AT4 has a range of 200 to 600 meters, and it can penetrate armor up to 460 mm.

Spc. Chengjie Liu (right), fires an AT-4 anti-tank weapon like Sgt. Jacob Saccameno, both infantrymen assigned to the headquarters and headquarters squadron, 3rd Squadron, 2nd Cavalry Regiment, monitors and assists under an anti-tank and anti-aircraft artillery area, on April 23, at the Adazi military base, Latvia. American and Latvian soldiers trained with a variety of weapons, including Javelin anti-tank missiles, Carl Gustav recoilless anti-tank rifles and laser-guided missile systems RBS-70 short-range anti-aircraft guns. Soldiers from five North Atlantic Treaty Organization, including Canada, Germany and Lithuania, have conducted a variety of training sessions together during Summer Shield XIII, an annual two-week interoperability training event in Latvia. (Photo by US Army by Sgt Paige Behringer) 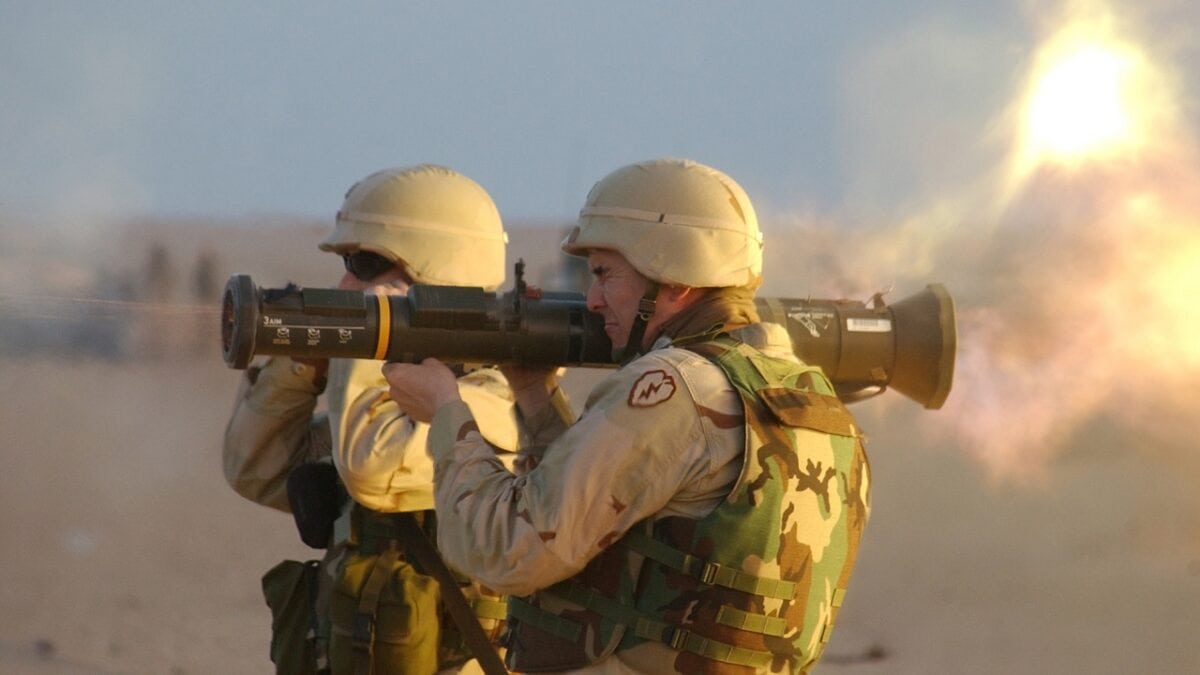 Spc. Thomas Johnson, a paralegal at HHC, 2nd Bde., Launches an AT-4 round during the weapons acquaintance at the Udari track in Kuwait on January 30.
Soldiers of 2nd Bde. Combat Team, 25th Infantry Division (Light) is currently preparing for its Operation Iraqi Freedom rotation.

Sweden has already delivered at least 10,000 AT4 anti-tank weapons, with more apparently on the way. This could be very bad news for Russian tanks.

In addition, there is a secret number of AG 90 rifles – the Swedish name for American Barrett M82 .50 caliber (12.7 mm) anti-sniper rifles – have also been delivered, and some of them have reportedly been used by Ukrainian snipers to target Russia’s high – ranking officers.

Now the senior editor of 1945, Peter Suciu is a Michigan-based author who has contributed to more than four dozen magazines, newspapers and websites. He writes regularly about military hardware, firearms history, cyber security and international affairs. Peter is also one Contributing author for Forbes.

‹ Monaco: a kid on the roof | Gilles Pudlowski’s blog › Toulouse: this prestigious women’s ready-to-wear brand is opening an ephemeral boutique at the Albert 1er hotel