The fact that Helloween left the controversy behind and now perform as a seven-member band dream Team with all the key players, is already a known thing. The line-up already showed that, for the first time, they came to Prague armed with a new eponymous album. They were accompanied by Hammerfall and a practically full O2 arena was waiting for them.

Helloween are simply one of the most influential European metal bands. Without discussion. They basically invented power metal and dozens of other bands swear by their name. Forerunners Hammerfall from Gothenburg, Sweden are one of them. Their honestly forged metal has been going strong for almost three decades, and as you can hear from this year’s “Hammer of Dawn” collection, they don’t lack energy. At least on the boards.

In the Vysočan hall, in front of the screen on which a winged god with a hammer in hand, i.e. the motif from this year’s album, shone, this formation was woefully static. The occasional move from one side to the other, climbing the elevated stairs or a short trip to the pier leading to the audience did not offer much life. The musicians’ feet were a little irritated by the sound as well. And strangely enough, not in the way we are used to in this place, i.e. by echoing and merging individual instruments into an unreadable ball. In terms of readability, everything was in the best order here. It was just that the sound was too careful, it didn’t kick and it was just quiet. The Swedes performed a regular set, this was not the usual time slot for an opening band. The rare guest was given an hour and a half and filled it by going through the entire discography with a slight emphasis on the current studio album. Despite the sound, it was a pretty solid start. Helloween’s eponymous latest record is exactly what listeners want it to be. A well-crafted jigsaw puzzle of epic melodies, rapid-fire drums and sharpened riffs, topped with a dash of genre clichés (but is it a cliché when these guys were actually making it up?) and energy from a renewed balance in the line-up. There will be room for possible shifts next time. 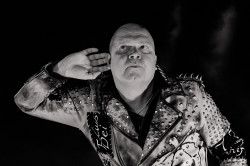 And that’s exactly what the concert itself looked like. A decent portion of hits fit into the two hours of playing time, among which four songs from the new album fit seamlessly – and it’s very functional material live. The anthemic “Skyfall” blew everything away, the brisk pieces of “Mass Pollution” and (a bit inert on the record) “Best Time” worked reliably, the ballad “Angels” brought peace. Otherwise, they chose Helloween from the deep past. The first three series (“Walls of Jericho” and both parts of “Keeper of the Seven Keys”) received the most space, and it was definitely a lucky choice. After all, back then, in the eighties, these musicians were the most alive and really discovered new things. What was produced in the nineties and two decades of the new millennium was mostly good, but no longer groundbreaking. The charm of the current line-up lies, among other things, in the tension created by the pair of lead vocalists. Andy Derris once replaced Michael Kiske and now they stand together on the same stage. And there’s still an element of rivalry here, and it’s a great driver for the whole screen. We should not forget Kai Hansen (another returnee, by the way), the very first singer of the group, who shone in Prague in almost thrashing a medley composed from the debut “Walls of Jericho”. In principle, everyone handled the demanding singing parts well, but there were a few hesitations. Be it, it will happen. 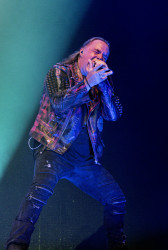 However, there is little that can be criticized about the battery of instrumentalists – everything was perfect here. The excellent rhythm section and especially the trio of guitarists did a top job and added some corny poses. But that’s beside the point. Another monumental composition took care of the finale, as expected “Keeper of the Seven Keys” with a functional repetition of the ending, when the musicians introduced themselves and gradually disappeared until only guitarist Sascha Gerstner remained. Then they came back full stop with “I Want Out”, which took them gold for selling their last album. Of course not, these musicians are right at home in the Czech Republic. Helloween version 2022 seems like a well-oiled machine made up of excellent professionals. But would a group of seven friends stand on a stage with a dominating giant pumpkin for drums? It certainly didn’t seem that way. As a result, the cliché about German professionalism AND German cold. A professionally performed concert with a whole series of great moments, but overall somewhat detached. Especially with regard to what is happening on the scene. But the audience literally got exactly what they wanted on a silver platter.

IPR analysis: About 300,000 more people live in Prague than according to official statistics

‹ Charlène and Albert II of Monaco, hand in hand, for their coral wedding anniversary › a well-known opposition leader spoke about the mood in the country – World – tsn.ua