PICTURE: People in Prague remembered Milada Horáková and other victims of communism

It is necessary not to forget the crimes of communism and not to look away from the effects of the current Russian aggression in Ukraine, it was said on Monday in Prague to pay for the victims of communist totalitarianism. Representatives of the government, the Chamber of Deputies, the Senate, Prague, the church and former political prisoners commemorated at the Újezd ​​memorial the lawyer and politician Milada Horáková, a victim of judicial murder, and other people executed, tortured and imprisoned for political reasons under the previous regime. Today, 72 years have passed since the execution of Horáková, lawyer Oldřich Pecl, SNB staff guard Jan Buchal and journalist Záviš Kalandra. 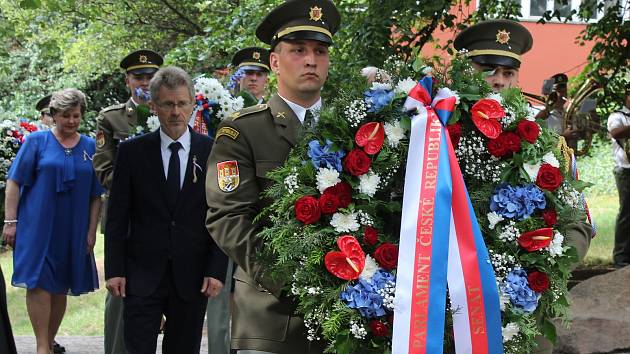 Reverential gathering on the occasion of the 72nd anniversary of the death of Milady Horáková and the Day of Remembrance for the Victims of Communism.

“We meet here to pay tribute to those who laid down their lives and lost their fates only because they refused to accept evil. That they refused to tolerate evil,” said Senate President Milos Vystrcil (ODS). He mentioned the need to combat oblivion to the victims and crimes of totalitarianism. In connection with the current war in Ukraine, he said that it was important not to look away from Russian aggression and their effects in the invaded country. “If we succumb to the seductive tendency to take care of ourselves and take care of what is closer to us, especially in terms of distance, then we run the risk that those who come after us will regret not being able to look elsewhere, “said the politician.

The Speaker of the Chamber, Markéta Pekarová Adamová (TOP 09), added that the only “guilt” of Dr. Horáková and her alleged accomplices was fidelity to the truth and democratic ideals. Deputy Prime Minister Vít Rakušan (STAN) described the murder of Horáková as a symbol of the cruelest thing in the Communists. According to the Austrian, it is also necessary today to see that totalitarianism still exists. And that the stronger I think can take the weaker state. “If we are not strong and clear enough of us here in the democratic world, at that moment the historical horrors may be repeated,” says the Austrian.

Former political prisoner Luděk Šácha also spoke at the piety. He said that some political prisoners had received an amnesty in the 1960s and later, but that the violence ended in life and the health of the prison could not be returned. In the end, he said the prayer of Cardinal Dominika Duka and the participants in the piety of the victim of totalitarianism in a minute of silence.

PHOTO: The Czech Presidency of the EU welcomed an acrobat under a balloon at Rudolfinum

Horáková, Pecl, Buchal and Kalandra were sentenced to death in a fabricated trial on June 8, 1950, and were executed on June 27 in the Pankrác prison in Prague. The location of the remains of Horáková and Kalandra is still unknown. According to researchers, the urns with the ashes of Pecla and Buchala are in a mass burial ground in the Motol cemetery in Prague. The convictions were overturned in 1968, but the judicial rehabilitation of the corrected persons did not occur until after 1989.

They won together in Prague, but not much. The negotiations with the Pirates will be explosive, says the political scientist

‹ After Vikingland, the Debrecen band will also take the Baltics › Montpellier formalizes the nice shot Khazri