We receive and publish

I am a son of San Marino who moved to the United Stateswhere I was born and live.
Fortunately for me, my parents instructed me in Italian as well as, of course, made me attend local schools and that’s why, fortunately, I can write them directly in “our” language. always the events of the Titan, especially now that, according to our acquaintances operating in the financial sector as freelancers in Delaware (our “San Marino” in the USA), “our” small country of origin seems to be going through difficult economic difficulties due to responsibility of many (including Italians) who have acted with total impunity to the detriment of the community.The purpose of my letter is in fact to try to understand and then explain it to my uncle and my relatives, not as much as has happened in the last twenty years which we understood by joining the dots formed by the latest events in the judicial news concerning the Process called “Mazzini account” https://www.libertas.sm/san-marino-processo-conto-mazzini-la-sentenza-di-secondo-grado-o-appello-condannati-e-assolti/ and that to the so-called “Black King” https://sanmarinortv.sm/news/cronaca-c3/re-nero-confermata-la-condanna-a-stefano-ercolani-per-la-tabarrini-la-partita-si-riapre-in-appello-a215939the report of the Advisory Commission of Inquiry on Bank Crack (https://www.libertas.sm/san-marino-ecco-la-relazione-della-commissione-dinunque-sui-dissesti-bancari/ ), the events related to Banca CIS and Asset Banca (of which my uncle was also a customer), in addition to the latest sensational indictment of the Central Bank’s top management (https://sanmarinortv.sm/news/cronaca-c3/commissariamento-asset-confuorti-e-savorelli-rinviati-a-giudizio-a221521#:~:text=Ci%20sono%20anche%20Confuorti%20e,coatta%20poi % 20of% 20Asset% 20Bank. ), but what today in the Republic seems not to happen despite what is just mentioned and now in the public domain. the former governance of the Central Bank also against the current management of the same which, from what reported by the chronicles, for example could try to prevent the rehabilitation of Asset bank, closed illegally, through an opposition judged to be even wrong on the merits, as well as in terms of presentation (https://www.ilrestodelcarlino.it/rimini/cronaca/respinto-il-ricorso-di-bcsm-1.7402604. )

That is, I wonder and we wonder, why who presented that opposition which, in essence, would seem to try to allow the continuation of what has already been ruled as illegal by the judges of the Court, does not appear at least among the suspects given that what was called, as minimum, it would seem a kind of aiding and abetting towards those who, illegally, closed a credit institution who, moreover, had assumed the responsibilities of another bank previously closed and a great protagonist of many of the financial misdeeds in San Marino and even the object of attention of the Italian Senate (session no. 692 Act no. 2-00442 published on March 14, 2012), perhaps in an attempt to maintain what is called “the status quo”.

Having then even read about a falsification of official documents – which the Official Bulletin of the Republic of San Marino should be ( https://www.titanpostsm.com/5246/DISSESTO%20BANCARIO:%20BOLLETTINO,%20PUBBLICI%20UFFICIALI%20E%20VERIT%C3%80%20DA%20TROPPO%20NASCOSTE./ ) – apparently in order to remedy the failure to enter the deadlines for registration in the passive status of the illegal Asset LCA already mentioned, we wonder why those who manage the Central Bank since mid-2018 had not reported this irregularity, paternity of the previous management, to the competent authorities and indeed has reiterated behaviors that are anything but transparent.

Furthermore, why the Central Bank, despite the evident reduction of authorized subjects and therefore of the consequent work, has not reduced its staff but, on the contrary, continues to hire personnel paid with the money of the community ( https://www.sanmarinortv.sm/news/comunicati-c9/bando-per-la-selezione-di-personale-per-banca-centrale-della-repubblica-di-san-marino-a222318 )?

Why in BCSM for years no one has ever been appointed General Manager but the Entity continues with an acting function (https://www.sanmarinortv.sm/news/comunicati-c9/repubblica-futura-what-succede-in-banca-centrale-a217110 ) who seems to accompany the current President since the time of the crack of the Cassa dei Risparmi di Cesena mentioned above?

Finally, why months after the definitive rehabilitation of Asset Banca by the local justice which, apparently from the pages of the Central Bank website, has now placed itself in voluntary liquidation (https://www.sanmarinortv.sm/news/cronaca-c3/lca-asset-respinto-il-ricorso-di-banca-centrale-vicenda-chiusa-a219254 ), even today on that same site there is not the slightest reference of who was in charge of that liquidation, although in truth the name is available on the local General Register of Companies?

Our acquaintances in Delaware and my uncle’s lawyer told us that in their opinion what is happening, including the “top secret” negotiations for the citizens of San Marino, is mainly due to the mix between the current Presidency of the Central Bank and the Italian secret services, a subject already the subject of fleeting attention on the San Marino media, but not on those across the border ( https://www.libertas.sm/san-marino-ombra-dei-servizi-segreti-catia-tomasetti-smentisce/ see also annex on the matter). And this, in their opinion, happens due to the ties of the same, as well as many of its predecessors, to certain political figures of the Belpaese among which the one who facilitated his appointment as President not without controversy and suspicion, given how much he hired and, for some, dubious advice, and regarding certain union actions against local magistrates and the usual dust swept under the carpet ( https://www.libertas.sm/san-marino-consulenza-gozi-tanti-i-punti-da-chiarire/ ). 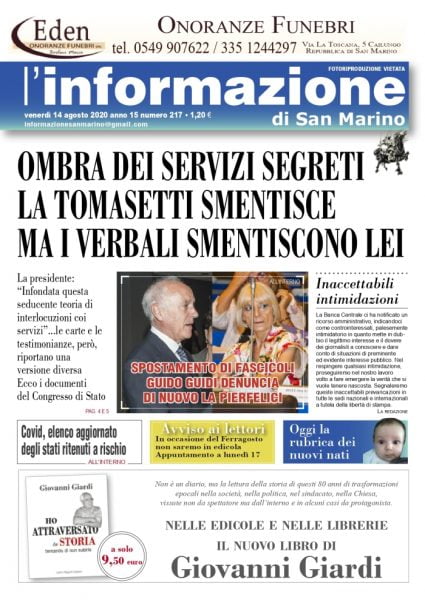 To conclude, then, ask you if what is happening in San Marino is in your opinion of only San Marino responsibility and how much Italian?

In the hope of finding space between your commitments for an answer, I send my best regards.

With a goal like Savignanese, Victor San Marino comes out victorious even from the fifth day of the championship

‹ Purple Jellyfish: Where they have appeared in Greece › The capital is so wild: wild animals in Berlin