Is the poleman really still assured of victory in Monaco?

It is customary to say that the Monaco Grand Prix is ​​played largely on Saturdays. On a track where overtaking is almost impossible, even kamikaze, qualification is crucial for the result on Sunday. Very often, the author of the pole position finds himself on the top step of the podium at the end of the Grand Prix.

And yet… Monaco always has its share of surprises in store. 2000, of the last 21 races contested in the Principality, only 12 times the poleman on Saturday managed to convert pole into victory. That is a conversion rate of 57%, which is lower, for example, than the Spanish Grand Prix (72%). So yes, if the qualifications are of capital importance in Monaco, the victory is ultimately not so guaranteed as that. What can happen to the author of the pole so that he cannot impose himself during the race? Here are the latest examples of the poleman who failed to win the Grand Prix.

The most recent example is perhaps also one of the cruelest. Event venue Charles Leclerc is about to become the first Monegasque to complete the pole at home. Best time in Q2, then best time in Q3 on his first lap, the Ferrari driver took his first pole position at home, in the Principality.

But the weekend that seemed idyllic then will turn into a nightmare. During his last attempt, Leclerc was too greedy at the entrance to the swimming pool chicane and hit the rail inside. Suspension broken, the Monegasque can no longer turn and rushes into the rail at the exit of the bend. Red flag, session interrupted then definitively ended. Despite the accident, Charles Leclerc holds his pole position thanks to his first timed time.

Except that… A few minutes before the start of the Grand Prix, during the exit lap, the world collapses. ” No, no, no, no… the gearbox guys” heard on Leclerc’s radio. The gearbox, affected in the impact of the day before, still seems to be faulty. Obliged to return to the pits, Leclerc no longer resulted. Ferrari has to withdraw car n°16, which will not even start. The place reserved for the poleman remains empty on the grid and it is Max Verstappen, who started in 2nd position, who wins in Monaco.

Charles Leclerc, injured during his last fast lap in Q3, could not even start the race.

Kimi Räikkönen had however done everything to win. The Finn, a model teammate for Sebastian Vettel since the German’s arrival at the Scuderia in 2015, had decided to play the big game in Monaco. Already on pole and winner in the Principality in 2005, Räikkönen was on track to do it again in 2017. On Saturday, “Iceman” won an authoritative pole, less than 5 hundredths ahead of Vettel. At the same time, he set a new record, that of the biggest gap between two pole positions: the last one was at the 2008 French Grand Prix, almost 9 years earlier!

On Sunday, Kimi Räikkönen got off to an excellent start and stayed in the lead, ahead of his teammate. Everything went well until lap 34. The 2007 world champion stopped first to put on more hanging tires while Vettel remained on the track. The German chained the fastest laps before returning to the pits on the 39th lap. After a very good stop, Sebastian Vettel came out on the track in the lead, just ahead of poleman Räikkönen!

If Ferrari holds its double and its first victory in Monaco since 2001, the two drivers of the Scuderia lived opposite destinies during the Grand Prix. Sebastian Vettel, already in the middle of a duel with Hamilton for the championship, won in front of an even colder than usual Kimi Räikkönen. The Finn will have to wait for the 2018 United States Grand Prix to win again. 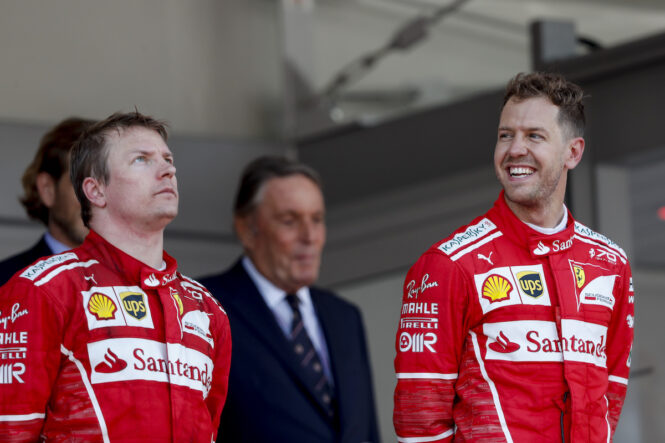 Vettel all smiles, Räikkönen resigned: the strategy did not work in favor of the Finn © Marc de Mattia / DPPI

The 2016 Monaco Grand Prix is ​​perhaps the most memorable Monaco race of the last decade in terms of dramaturgy. Ask Daniel Ricciardo what he thinks about it. The Australian, who at the time was the face of Red Bull, seemed destined for victory in the Principality. Author of an incredible pole position on Saturday, ahead of the untouchable Mercedes, Ricciardo already sees himself as the future winner of the legendary Monegasque event.

On Sunday, the day of the Grand Prix, the weather is capricious. Heavy rain falls on Monte-Carlo, the conditions are dantesque. Several drivers are at fault, including Jolyon Palmer on his Renault, victim of a big crash at Sainte-Dévote. However, nothing disturbs Ricciardo, always leading in spite of the elements. The sun resurfaced and the track began to dry out halfway through the race. Hamilton stops first to try to surprise the leader by putting on slicks.

And on the 32nd lap, it was a tragedy for Ricciardo… The poleman went into the pits, but his team was not ready to welcome him! The dry tires are not ready, but the Red Bull driver is there. Daniel Ricciardo got annoyed, revved the engine, and started again after a 13-second stop! Hamilton takes advantage of this and passes right in front of him. Incredible scenario when everything seemed to succeed at the “Honey Badger”.

Despite several attempts to overtake Hamilton, the Red Bull driver could not regain his good, because of a track that was still wet off course. The Briton wins and the Australian, for the first time, loses his characteristic smile. Daniel Ricciardo will make up for it two years later, in 2018, with his only victory in the Principality. 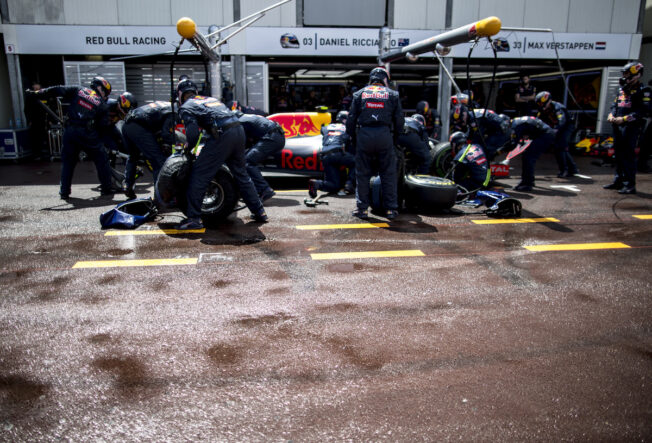 Before his success in 2016, it must be said that Lewis Hamilton had also had his share of misfortune. In 2015, the Briton took his first pole position in Monaco, nearly 4 tenths ahead of his teammate and best enemy Nico Rosberg.

Hamilton dominates the Grand Prix head and shoulders, widening the gap with Rosberg despite brake problems. The reigning world champion is then heading for great success in the Principality.

But with only a few laps remaining, everything was relaunched by the accident of Max Verstappen who hit Romain Grosjean at Sainte-Dévote. The safety car is deployed on the 65th lap. Mercedes and Hamilton decide to bet on the softest tyres, considering that the gap with Rosberg is sufficient. Big mistake: the Briton comes out behind Rosberg but also behind Vettel! Mercedes made a mistake in the calculations and the poleman found himself trapped in 3rd place.

Defeated, Hamilton still tries to attack Vettel several times, without success. Rosberg wins the Monaco Grand Prix for the third consecutive time and Hamilton, disappointed, is content with the third step of the podium. After the end of the race, Toto Wolff apologizes to Hamilton and says: “We screwed up his race” while Niki Lauda talks about a “unacceptable error”. 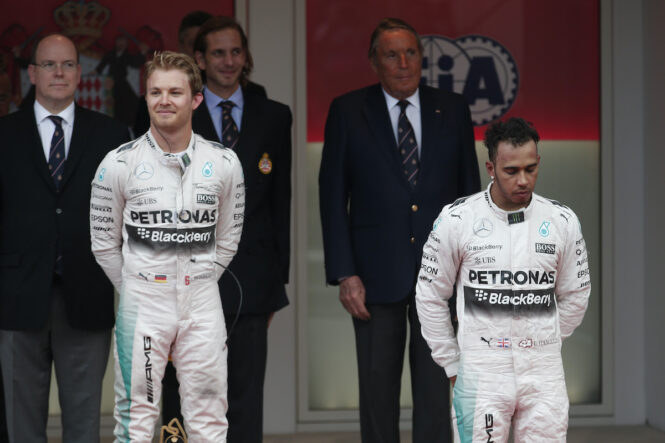 It should have been the last pole position of his career. For his last Monaco Grand Prix, Michael Schumacher signed a masterful qualification on Saturday. One of the ultimate demonstrations of his immense talent but which will be marred by finesse.

During the previous Grand Prix, in Spain, the Mercedes driver had stopped with the Williams of Bruno Senna. An accident that the FIA ​​will penalize with five penalty places for the German… for the Monaco Grand Prix. Poleman Schumacher must then start from 6th and leave his place on pole to Mark Webber.

During the race, “Schumi” did not manage to find the rhythm demonstrated the day before and remained confined to the peloton. Finally, 15 laps from the finish, the mechanics of the Mercedes betrayed the seven-time world champion. Victim of a problem with the fuel pressure, Schumacher was forced to abandon his last Grand Prix in the Principality. A race he will have won 5 times in his career. 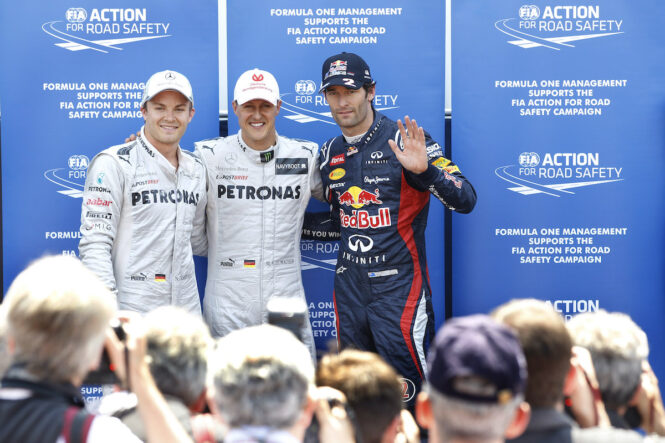 Despite the best qualifying time, Schumacher only started 6th in the Grand Prix, penalized for a collision in Spain © JEAN MICHEL LE MEUR / DPPI

“I have to refuse”, the Monaco Parc campsite is full for the summer in Longny les Villages

Stéphanie de Monaco: Sublime at the beach, her daughter Pauline Ducruet pulls out all the stops in a python bikini

Albert of Monaco received by a famous French animator: find out which one!

‹ Toulouse: the future still in suspense of Mix’Art Myrys › Max Verstappen (Red Bull), fourth in qualifying for the Monaco Grand Prix: “We weren’t in the battle for pole”