The electric formula Dragon e2 was constructed in nine months by students of the Brno University of Technology. They will compete with her in the world series Formula Student, where they will try to defend the position of the best Czech team. 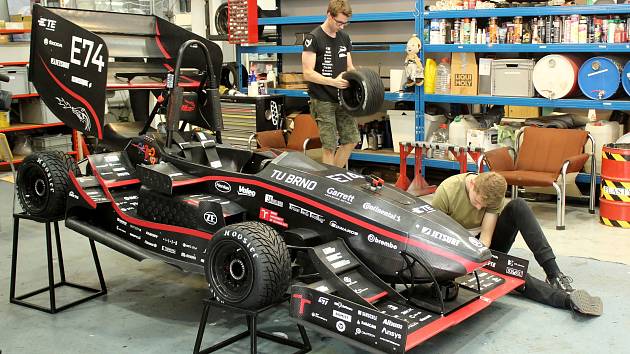 The new electric formula Dragon e2 was built by students of the Brno University of Technology. The team leader is Ema Záňová.

“It’s our Dragon e2. We prepared it from the design to the final form. We started the design phase in September, it lasted four months, “said team leader Eva Záňová. She is the first woman to lead a student formula team in the Czech Republic.

The car is powered by two electric motors. The total weight is about 180 kilograms, the power is up to 70 kilowatts. “This year’s big news is the ten-inch rims we switched from thirteen-inch rims. We have new tires. This is a completely new concept, “said the team’s technical leader Marek Dostál.

The Monopost is freshly completed and has not yet had a test drive. Students must complete the required five kilometers in June. “We have to prepare the car for the competitions now. We will take part in three competitions in total, and they are all over the summer, “Dostál outlined.

A courier on a scooter drove under a car in Brno. He miraculously escaped, the food was porridge

The crisis in the supply of some components has complicated the compilation of the formula for students this year. “Even though we had Plan B for each solution, sometimes we even had to come up with Plan F. For example, when we designed a cash on delivery car, she was given two and a half weeks. When we ordered the parts, the deadline was extended to nineteen weeks, “Záňová described.

In addition to cabling, they waited a long time for tires, for example. “We are still waiting for another delivery, we only received the first batch. Next we are waiting for us to arrive from the USA to Germany and then to us. That is also the reason why the monopost now has wet tires on, “Dostál explained.

On the formula, there are a total of fifty-three team members, with four pilots available. “They are team members, they must not be professionals. Mostly it is someone who has experience with management, “Dostál added.

Two examinations at once. They effectively detect cancer in Bohunice

Cities are starting to build new apartments. Cooperative housing is also starting up