Russian note on transit through the Nemunas

One of the most important the May news was related to international politics. At the time, Bolshevik Russia was looking for opportunities to gain currency and increase timber exports, which had plummeted during the years of war, revolution, and civil war.

This concern of Russia is reflected in the news published in the Lithuanian press on May 2 of that year. the word note given to our government.

The request to allow the forest to pass through the territory of Lithuania on the Nemunas from the vicinity of Minsk was passed through the Russian mission.

Although both maintained relatively good relations at the time, Lithuania agreed to support such a request. 1920 July 12 Lithuania’s peace treaty with the Russian SFSR provided for the principle of the most favorable trade and duty-free transit of goods.

However, in 1921. With the Treaty of Riga, Russia has created an ambiguous feeling. After recognizing not only Vilnius, Trakai and Druskininkai, but also cities such as Grodno or Lida, Lithuania later established borders with Poland further east of this border.

A map of Britain’s The Times showing a parody of both the 1921 The Treaty of Riga established the Russian-Polish border, both in the previous 1920s. territories recognized for Lithuania by the Treaty

Therefore, the transit that would take place through the territories controlled by Poland is approved, Lithuania would have effectively recognized the Treaty of Riga and the occupation of Lithuanian lands.

Lithuania failed to persuade it to present the strict policy of prohibiting transit on the Nemunas in May 1922.

XX a. 4 dec. timber from Russia to Klaipeda was transported by rail or ship from Leningrad.

Renovation of the city theater is planned

On May 5, the daily Lietuva announced that it was planned to renovate Kaunas Theater: cover the roof during the summer holidays, change the electricity supply, introduce a water supply hall, raise the purpose of the City Board, introduce a two-storey extension from Kęstučio Street, from Keistučio st. path ”. 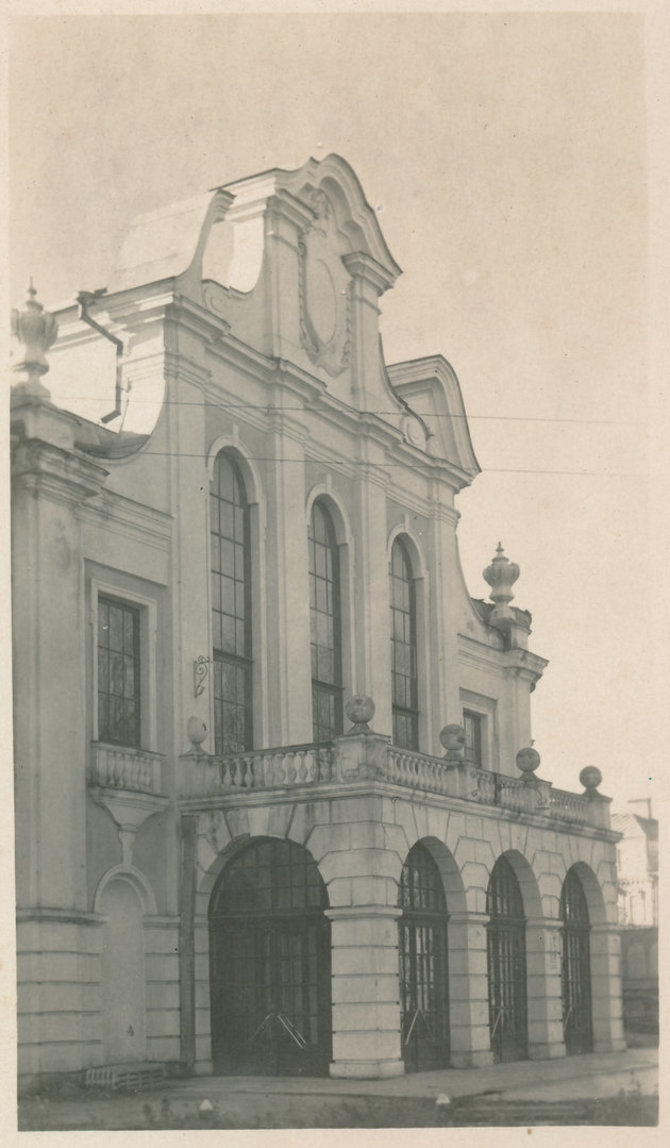 The article reports on the commission, which consists of 3 people – Mykolas Songaila, Vladimir Dubeneckis and engineer Antanas Jokimas (whose architect is now Pranas Markūnas), and “to prepare a sketch and a short estimate for theater repairs in a week’s time”.

During the reconstruction, the stage was raised and expanded, its floor was divided into parts (each can be moved separately). The square-shaped auditorium took on the shape of a horseshoe, the number of seats was increased, the third row of balconies and the central (presidential) lodge, and the orchestra pit were installed.

All the works lasted until 1925, when the palace was officially given the title of State Theater. Later, the building underwent several reconstructions: in 1930, 1980–1984, as well as in the first centuries. decades.

The beginning of the Lithuanian football championship

While the architects were drawing up plans to renovate the palace, which was to become the main high-cultural space and a certain state attribute, the first football championships of the country were held at Ąžuolynas and Fredas sports grounds.

This sport was still unknown to us before the First World War.

As many as sixteen teams expressed their wish to participate in the first Lithuanian football championships, but due to the poor material situation, lack of sports equipment and uniforms, only ten were allowed to participate. 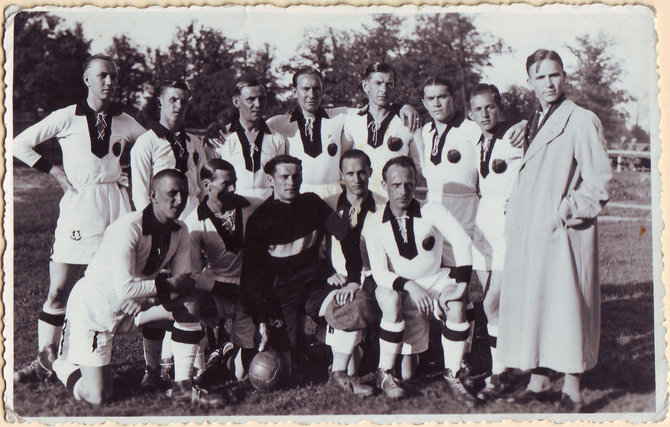 Teams from other cities did not participate in the first championship – they were all from Kaunas.

According to the weekly magazine Trimitas, the start of the championship was eagerly awaited, but due to bad weather, few spectators gathered on Sunday, May 7.

The second final round of the competition was scheduled for the fall, when the teams had to gamble a second time.

Accident at the War Museum

More than one newspaper reported on May 18th. a tragic incident in the history of the War Museum that killed Akimas Sazonov (1897–1922), a participant in the War of Independence.

On the day of the funeral, May 20, an obituary was placed on the front page of the daily Lietuva, in which the deceased was mentioned as “an honorable disabled man of the Lithuanian Armed Forces, a former soldier of the Gudai Battalion, a defender of Lithuania and the Gudian Land, a knight of Vyti and Jurgis Crosses”.

A.Sazonovas since 1921. March 16 served in the War Museum, served as a guard, and often told visitors about the struggle for independence. 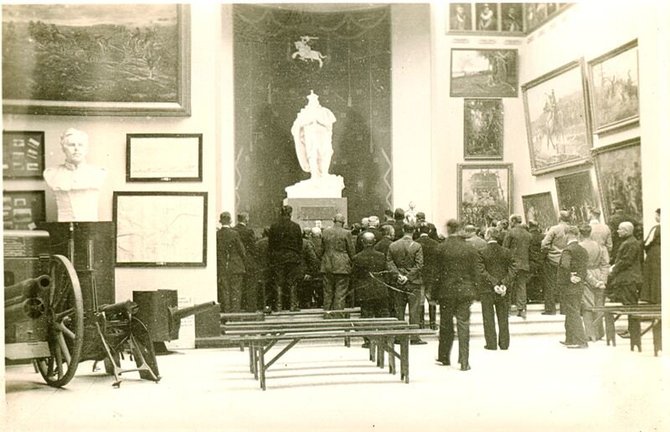 He showed a bomb with an empty grenade to A. Bialazarevičius, a priest from Gardam who arrived that day.

But inside the gun, the capsule was left with a grenade that exploded and injured the soldier’s abdomen. After the first aid was given, the wounded was taken by ambulance to the Military Hospital, where he underwent surgery. But life could not be saved.

The deceased was buried in Ąžuolynas, a former old people’s cemetery. were closed. In their place in 2016. a monument was erected on which the name of A.Sazonov was engraved.

On May 31, the first children’s outpatient clinic was opened in Kaunas. The event was described by the magazine Medicina (No. 5) and other publications.

The outpatient clinic was set up by the American Red Cross to provide instruments, medicines and medical specialists. The city board provided the housing, repaired and equipped it.

The consecration ceremony was decided by Clement Shawys, pastor of the Carmelite Parish (transferred to the Seredys in the autumn of that year).

Even before the outpatient clinic was opened, Laisvės al. 12 (now 24) from February. the mission of the English Countess Philanthropist Murielė Paget – Maternal and Child Care Center and the Milking Station.

1923 At the beginning of the 1923s, the municipality took over the health center, and the dairy station was commissioned in 1923. February 24 The “Milk Drop” Society was founded in 2006. Kazys Grinius. 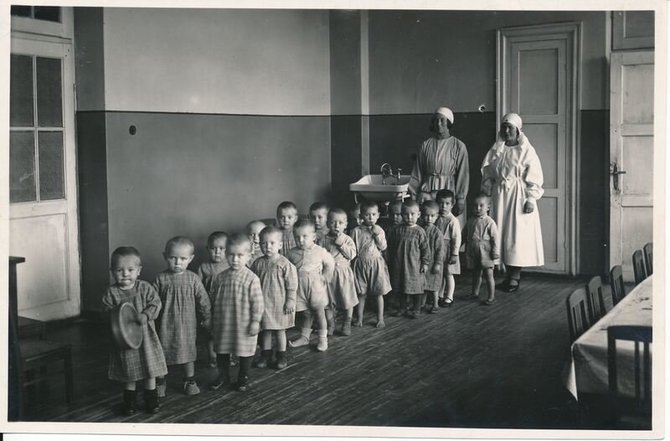 Photo of Kaunas City Museum funds / Children under the care of the Milk Drop Society. 1934

A decade later, five such health centers were operating in Kaunas (in the name of Lady Muriel Paget – in the above-mentioned building, Laisvės ave., Ryano – Juozapavičiaus ave. 68, Aleksoto – Rotušės a.

Children’s Hospital in 1924. May. managed to open in an old two-storey building on Maironio str. 11, but the conditions there were only satisfied, as many as 35-40 beds, children with infectious diseases were not properly segregated.

In the 1930s, the hospital was moved to a newly built house on V.Putvinskio Street (now here is the Artists’ House). 1940 Children’s Clinic of Children’s Diseases has been opened in new modern premises in Kaunas clinics.

What expected and unexpected events flashed in the press pages in 1922. in the summer? You can find out about this from our summary in August.

Those who would like to immerse themselves more in the events of the century, we invite you to follow the project “100 years ago“Page. A new message from the past appears in it every day.

According to the material of the project “100 Years Ago”, Kaunas City Museum Rokas Sinkevičius, museologist of the Kaunas History Department

Kotryna Teterevkova, shining with bronze: “Perhaps Lithuania is a country of brassists?” | Sports

Lithuania is constantly growing FDI due to geopolitical problems

Lithuania, Estonia and Latvia have confirmed participation in 2023. in “Eurovision”.

‹ Life + Style: They danced against animal experiments in downtown Budapest › Grain price through the roof: growing Dutch grain ‘more interesting by the day’