A defeat as quick as a victory – Liechtenstein

KOCENI – Liechtenstein’s national floorball team only lost its second World Cup qualifier against Poland by a score of 2:4 on Thursday. A sensation was in the air against the Eastern Europeans at the tournament in Koceni, Latvia. The opening game on Wednesday is lost against top favorite Norway with 1:13.

Who would have thought it: Three minutes before the end, the Polish players just shoved the ball towards them – the motto was, don’t offer the Liechtenstein attackers any more chances. It was almost an accolade: The eleventh of the last World Cup only wanted to save the 4:2 lead over time. The Polish team did that very cleverly, so the winner of the second World Cup qualifying game was unsurprisingly Poland. The Liechtenstein team, a dwarf in world floorball, could at least feel like second winners.

It was an achievement the players of Liechtenstein can be proud of. They almost managed to go into the first break 0-0. Only one (!) second was missing. And just a minute after the “tea” followed Poland’s 2-0. But Liechtenstein’s defense around the strong goalkeeper Lukas Good – deservedly awarded as the best player – found its rhythm again. And towards the front there were always dangerous pinpricks. This was rewarded. With a majority, Andreas Tischhauser scored his first natitor with an almost perfect volley. The 1:2 (22nd) brought the tension back.

The big favorite Poland was now awakened. Only half a minute after the restart in the final third it’s 3:1, two minutes later it’s even 4:1. However, the Liechtenstein team again showed resilience. Remo Tischhauser scored his integrated already “obligatory” hit with a penalty (34th) 2: 4. Now the air burned. The Polish team wobbled, at least a little, while the Liechtensteiners cheered every shot blocked and their own shot. But no more hits wanted to fall. Maciej Bogdanski in the Polish goal saved his team from further damage. The Liechtensteiners certainly would not have lacked opportunities.
. 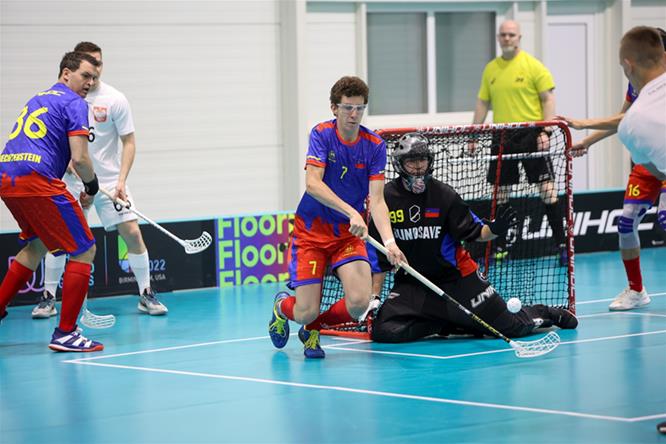 A kind of “finale” now

In the first game against group favorite Norway, Liechtenstein lost 1:13 on Wednesday. The result sounds brutal, but against the sixth place in the last World Cup, the Liechtenstein team made a good “trap” for two thirds. The Norwegians needed two manpower situations in the first third to make it 4-0. After Mario Neff (24th) made it 5-1, there was some tension at times. But a short-handed goal took the wind out of Liechtenstein’s sails a little later. In the last section, the legs got heavier and heavier – six goals were the result.

On Friday, Belgium is also waiting for a team that lost twice. 1:7 against Poland and 1:12 against Norway. A starting point that gives hope. “Of course we’re outsiders,” emphasizes head coach Marco Kipfer, “but the chances of victory are greater than before.” Theoretically, even a draw would be enough for third place. “Let’s be surprised,” says Kipfer, “the progress we’ve made in the last two years makes us optimistic.”

VU candidate: Peter Frick would like to become head of Mauren – Liechtenstein