The new pavilion of the school in Lipence: It will be presented by architects from Vllnna

The primary school in Lipence has a really long tradition. The oldest part dates from 1868. The school was originally built as a small classroom with two classrooms and two apartments for teachers. Gradual additions and extensions became a school with nine years. The four-storey pavilion was last added in 2019, in which, among other things, six classrooms for about 140 pupils, cabinets with a choir room, changing rooms, sanitary facilities and a space for technical equipment were created.

However, the school canteen is located in a completely unsatisfactory pavilion, which was built relatively recently – in 2000. “This pavilion is the weakest link in the entire school grounds, it has poor spatial dispositions, flows into it and freezes“said the mayor of the Prague – Lipence district Lenka Kadlecová (Association for Lipence).

The old pavilion will free up space for a new extension

Therefore, in the year, the city district decided to announce an architectural competition for an extension, which will replace the unsatisfactory pavilion to be demolished. “In June 2021, we concluded a contract for the competition administrator with the company Havel & Partners, in October the council approved the competition conditions and the tender assignment. In December 2021, the jury selected five architectural studios from the seventeen registered portfolios, which was invited to prepare competition proposals. The final evaluation meeting of the jury took place on March 30, 2022 and the 1st, 2nd and 3rd place of the competition was awarded, “the mayor described the course of the competition.

The architects, above all, had to deal with very limited space. According to the expert jury, Vllnn’s architectural studies did the best. “Gradually connecting the extensions to the original building created many disparate masses and height levels. Demolition extensions with a dining room change the opacity of the whole only partially. The remaining complex of buildings therefore we supplement with a new functional building, which is intentionally separated from the original in terms of material and expression at maximum package utilization. The new building completes the street line and returns the school to the lack of indecency, “said the architects.

The new extension will have a wooden skeleton, reinforced with steel panels. The ceilings of the building will also be wooden, set in steel frames. As there will be an increased capacity in the new extension and the school canteen, the architects also thought about noise reduction. The ceilings will therefore be lined with acoustic boards.

In addition to the new school canteen, there will also be a main classroom for pupils in the extension. According to the tender, the estimated costs of building the pavilion were 75 million crowns without VAT. 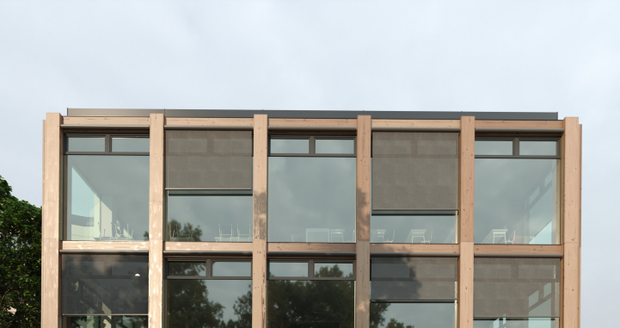 The primary school in Lipence will expand with a new port. There will be a dining room and classrooms