Today, the representatives of the city and the Gallery of the Capital City of Prague presented a painting of Perak, a legendary Prague superhero from the Protectorate, to journalists. The author, acting under the name Toy Box, painted it on the two pillars of the bridge, on which the train used to run and today serves as a cycle path connecting the center of Prague with Žižkov.

“I decided to paint Perak in Zizkov after consulting with ethnographer Petr Janeček, who is preparing a book about this original Czech superhero. According to Janeček, industrial districts were just like Žižkov, where legends about him originated. People first started talking here, maybe that’s why we’re bringing this legendary Nazi fighter back to where he belongs,“says the author. She sprayed two large – scale paintings in black, gray and white, one ten – meter and the other eight – meter.

A similarly painted underpass has been added since the beginning of the year at Thomayer Hospital whose in Řepy or large mural at the tram turnpoint Nádraží Hostivař. David Mazanec treated it as a large swimming pool, where swimmers circle similarly to trams on a loop. In addition to Pérák, a mural is currently being built at a transformer station in Jižní Město.

The Arts for the City program was established by Prague in 2016. It focuses on the permanent placement of works of art in public space.

The fictional hero Franta Pérák raged in Bohemia during the Second World War. Nobody knows who it was. People only knew him as a mysterious figure with springs on his feet. He was able to jump over high tenement houses, and later the entire Vltava valley. The legendary Perak was to terrify the German occupiers.

According to the story, he harmed the occupiers and collaborators, sabotaged the German war economy. It occurred mainly in Prague, but the testimonies collected by ethnologist and folklorist Petr Janeček “prove” his work in other places as well. In his book of collected contemporary urban legends, he called Pérák the most mysterious mythical figure in Czech modern folklore. even the most interesting folk creature of the Second World War.

Similar demonic figures appeared in other countries, but none of them probably reached Perak’s fame and spread. According to some accounts, the protectorate authorities even tried in vain to catch Perak – but there is no official evidence of such raids.

Unlike other superheroes, Perak did not originate from comics, but after the war a film was created and even later only a comic. During the Nazi occupation, he was considered a person of flesh and blood who had some clever jumping equipment.

Shortly after the war, in 1946, the character of Perak came to life in the film through a thirteen-minute animated film by Perek and SS by Jiří Trnka and Jiří Brdečka. Ondřej Neff developed the theme of Pérák twice into a comic book – in 1988 and 2001. Ten years ago, he prepared a production of the Vosto5 ensemble about Pérák. 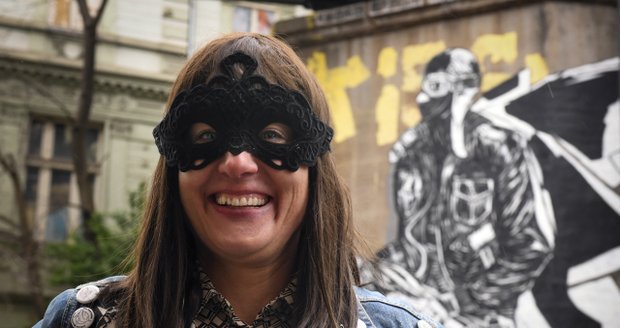 The pillar of the bridge in Žižkov was embellished with a large painting by Pérák.

‹ Public lighting will become more expensive in Prague, so the sights will shine for a shorter time › Bulgaria needs leaders to look ahead