Never before has rugby at the Oysters been so successful, at least when you see it combined with prizes and championships. The club has grown by seven percent every year in recent years and by no less than eleven during the Corona period. These are also successes that this association cherishes. 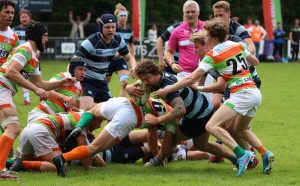 In a blistering match against The Hookers from Hoek van Holland, the rugby players from Oisterwijk Oesters took the title in the Trophy Group of the honorary division at home. The Oisterwijkers narrowly won the game against 28-24. Like Oesters, Hookers also had won in their Trophy Pool games so far. The winner of this mutual duel also became the overall winner.

,,I am extremely proud of everyone within the team and the club that we have achieved this together”, said captain Rik van Balkom van Oysters after the game. “I don’t think we have ever finished so high in the league in the history of the club.” that’s right. Leading up to the final, the Oysters won eight times in a row. And that at the highest level in the Netherlands. For a sensible audience that took part in the festivities en masse. Trainers Johan Hartwigsen and Johnny Nas saw a not very good match Oyster’s point. But it was exciting and uncertain until the last moment who would win.

Less than a year and a half after its foundation, AMPLR is already ready for its first acquisition: “The Netherlands is on the agenda” | Ghent

Voorburgs Dagblad | What are the future online casinos in the Netherlands

‹ the driver involved in a fatal accident in Beugny was driving with 3.39 g/l of alcohol in his blood › Athletics: 2 gold medals at the Piacenza Regional Championships for the San Marino Gpa