The rules were approved by councilors last summer. They include requirements for the design of borders, shading and garden equipment and, with a few exceptions, prohibit them from being placed on landings. It has already been established for the area of ​​the Prague Monument Reserve at the municipality the rules of the monument care department, the new ones are more extensive and detailed.

According to the approved document, the city wants to evaluate each application for the location of the front garden individually on the most frequented squares, taking into account the approved rules. A working group composed of representatives of the municipality should serve this purpose, Prague 1 or the Prague 1 Chamber of Commerce, represented by its first Deputy Chairman Filip Dvořák. Kristýna Drápalová, Assistant Deputy Mayor Adam Scheinherr (Prague Sobě), became the chairwoman. The first meeting of the group took place at the end of February this year.

The city’s progress was criticized by some restaurant operators in the center last year. In addition to stricter rules, they also did not like the fact that the municipality’s management decided to reduce or abolish some of the front gardens in the historic center. The restriction concerned gardens located on two main tourist arteries – on the Royal Route leading from the Powder Gate through the Old Town Square, Charles Bridge and the Lesser Town to Prague Castle, and on the so-called fortification corridor, which copies the original Old Town walls in Národní, 28. října, Na Příkopě and Revoluční streets.

Some entrepreneurs, who were either affected by the reduction of the area or the complete abolition of the garden, described this last year at the council meeting as liquidation. They also drew attention to the fact that the city collected millions of monthly payments for space rentals, which it would lose. Representatives of the municipality’s management said, among other things, that they were trying to provide enough space for pedestrians and prevent the front gardens from blocking access to historical monuments. 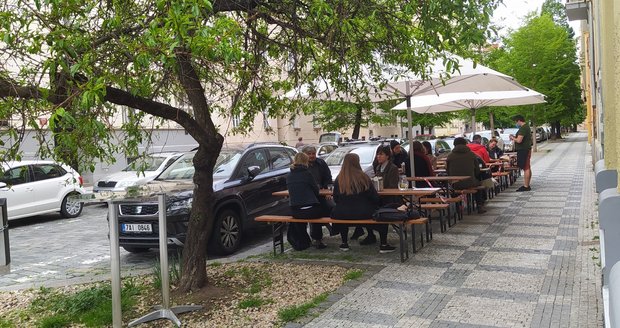