This was the magnificent start of the new Czech Cup in the long and medium triathlon, the first race of which was recorded on Sunday at the Nové Mlýny reservoir. In the end, Tomáš Řenč rejoiced at the close victory at PálavaRace. Among women, Simona Křivánková confirmed her role as the biggest favorite. 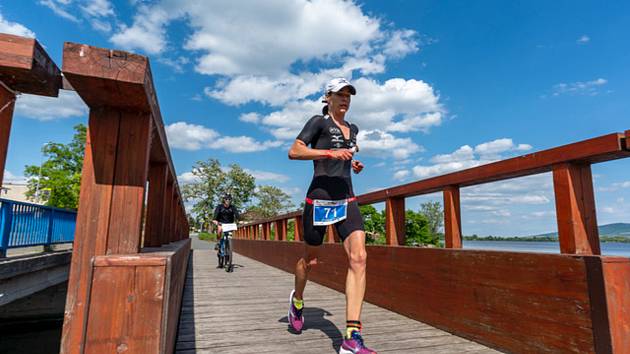 The beautiful drama culminated in the last kilometers of the running part. After 1900 meters of swimming, Řenč and Pavel Hradil went out of the water in the first positions, who were the first to set out on a 100-kilometer cycling track. “I started right at the beginning of the round. I drove it to 320 watts and soon I was left alone in front. Then I gradually reduced to some 280 watts. But at the 80th kilometer, Honza Šneberger ran past me. So I stopped thinking about my family and started working again, “said Řenč with a smile.

He brought about a minute to the depot. “I was hoping it wouldn’t go well for Honza. I gradually downloaded it. I’ve lost about twenty seconds in the half marathon. And I already knew that I would get in front of him and I watched the last round. It was a wonderful race, “said Řenč, who won at 4:15:15.

Sneberger appeared on the blue carpet under the finish gate with a loss of 84 seconds. The dramatic duel on the beautiful cross-country track leading directly along the bank of the reservoir also took place for third place. He was won by Petr Cívela, who lost six minutes and seven seconds to the winner. Karol Jalaj was only three seconds slower.

The women’s race had a clear favorite. After all, Křivánková won all the Czech Cup races in the first year. And it also went great this year. She lifted the white finish line over her head in 4:45:45, which was enough for her to clearly win the women’s race and to take fourteenth place in the men’s standings. “I was really worried about my bike. Two weeks ago, my husband and I went to a demanding long triathlon in Spain, which was an hour longer than usual. I recovered from it for a long time and wondered on my bike if I had overdone it. But then I was surprised by the estimate I came to the depot, so maybe it wasn’t so bad, “she said immediately after the finish in the finish area.

In less than five hours, the second woman, who was Helena Kotopulu in 4:59:55, also pressed the finish time. Hana Kolářová entered the new cup year in third place, finishing in 5:06:03.

PICTURE: Doll, Dobias or Svancara. The Sigi team shone at the football party in Čejč

The Czech Cup in medium and long triathlon will continue on June 4 on the Hrádek song near Pardubice, where the legendary CZECHMAN Triathlon is.

The royal family is under pressure again. The new book reveals more spiciness

The warriors near Pálava practiced shooting like the Romans. Behind them were the bustle of an aquapark