“This is really the last battle where Ukraine should not lose,” said Professor and Junior Sergeant Viktor Moisienko.

Professor of the Department of Ukrainian Language of Ivan Franko Zhytomyr State University Victor Moisienko from the first days of the large-scale war left his teaching career, joining the Armed Forces of Ukraine. He himself said that there was no reasoning and could not be, because the question of the existence of our state is at stake.

– On February 24-25, when the first bombs fell, I think many such professors, doctors, teachers and other people just went to war because it seems to me that this is really the last battle where Ukraine should not play, – says Junior Sergeant Victor Moisienko.

He gave 30 years of his life to teaching, went from university assistant to professor. The head of the Ukrainian language department, Halyna Hrymashevych, who has worked with him since 1991, says no one at the department was surprised when the professor went to defend Ukraine, put on a military uniform and took up arms.

– He defends Ukraine from a young age, only then his weapon was the word, – explains an experienced teacher and colleague of Viktor Moisienko. – First it was dialectology, and then – the history of language today, that is, what justifies our language, our genetic code. From an office scientist, he left it all, became a defender of our country. He could not leave for many reasons: 57 years old, a position on which many things are based, but he left because he could not do otherwise. 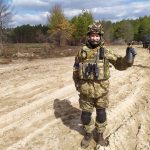 The 57-year-old defender himself explains his life choices this way.

– The denouement between Russia and Ukraine was to take place. It all worked out, because these two countries are unlikely to get along and not because of Ukraine. Because Ukraine has never had any claims against anyone, – says the man. – But how long we live, how many claims our northern neighbor had against us. And when the Ukrainians began to straighten up and say out loud that they are Ukrainians, that they do not encroach on anyone’s history – Polish, Turkish or Russian – but I want to have my own, neither the Turks, nor the Hungarians, nor the Romanians threw anything at us. The only one who has always done this is the semi-savage people, who do not teach their own, but encroach on others.

The scientist-defender is convinced that Ukrainians have already taken place as a nation, which gives us an incredible guide – freedom or death.

By the way, in addition to Viktor Moisienko, today 50 teachers, employees and students of Zhytomyr State University named after Ivan Franko are fighting for the freedom and independence of Ukraine.

Zelensky wants to end the war in Ukraine before winter – tsn.ua.

what Putin and Macron talked about before the war – tsn.ua.

‹ Rovanpera disputes last special to lead with nine more seconds › Russians interviewed in the street react to the Seimas’ decision to declare them terrorists: that Lithuania as an African country