From Venice to China on foot: Vienna Cammarota, 72 years old, will arrive at his destination in December 2025 | Today Treviso | News

VENICE – Cammarota of Vienna72 years old, Ambassador ofItalian Cultural Association, Archeoclub of Italyleft on foot on 26 April fromIsland of the Lazzaretto Nuovo in Venicedestination Beijing! She is the first woman in the world who is walking there Silk Road walk to tell it in the contemporary era. It will arrive in China no earlier than Christmas 2025! Vienna will travel 22,000 km through Slovenia, Croatia, Serbia, Bulgaria, then descend towards Turkey, Georgia, Iran, Turkimenistan, Azerbaijan, Uzbekistan, Kyrgyzstan, Kazakhstan, Mongolia, then China. The stica walker has already covered 500 km on foot in less than 30 days.

Vienna left on April 26th from the Lazzaretto Nuovo in Venice, accompanied by Gerolamo Fazzini, President of Archeoclub of Italy headquarters of Venice, which gave her the Flag of Venice inside which there is the word PACE, from the countess Chiara Modica Donà Dalle Rose, president of the International Biennial of Sacred Art, who also received it at the Donà Dalle Rose Palacedating back to the 16th century, one of the most important in Venice and home to the International Biennale, from Debora Onistovice president of the Culture Commission of the City of Venice, from Zhu Yuhuaof the Ferrari Fan Club of Shanghai which handed over to you the president of Ferrari, from Luciano Tellaroli of the Cultural Ambassadors Association on the Silk Road, from Giorgia Fazzinicommunication manager at Lazzaretti Veneziani. 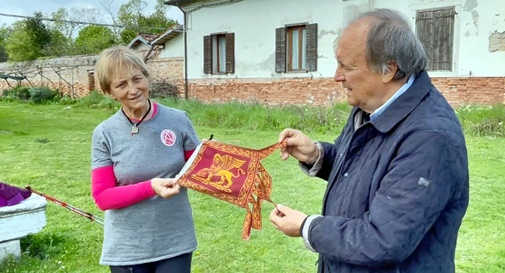 “This morning a few moments of panic because my cell phone had failed me and therefore following the orientation I am setting out for Kutina. Thirty years after the war I enter the places that were the scene of war in 1992, while today, 30 years later, another war is being fought in Europe. I study the route the night before, just before going to sleep. At 9.30pm I go to rest to start the journey just before 7am. In recent days it has been really difficult to ask someone for information, in the open countryside and on roads where cars were speeding by“: Vienna writes in his travel diary.

“Yesterday, along the way, while I was skirting a railway line, I noticed a train passing by with unique characteristics as it also had seats on the top and uncovered to favor the panoramic view. I crossed Popovaca, while in Zagreb I was interviewed by the National TV of Croatia. Kutina is a land of emigration from Belluno. In fact, there is a small Italian community, originally from Longaroneestablished in October 1996. The city has 24,597 inhabitants and is located in the Sisak region ”.

A tandem will also be extraordinary on the occasion of European Days of Archeology. “The European Days of Archeology will take place on the third weekend of June. Archeoclub will be there and what we will have with Vienna Cammarota – he said Rosario Santanastasio, national president of the Archeoclub of Italy – it will be a really exciting time. On the one hand Vienna will tell us about the archaeological and cultural heritage that, for example, the era left in the territories it will cross in those days and on the other hand there will be numerous events throughout the Italian national territory precisely in the archaeological sites “.

Umbria, first flight to Vienna from 1st July. The Economist crowns it the most pleasant city in the world – Corriere dell’Umbria

‹ Skoda Battery Factory Hungary Lead › Girl beaten in Venice, her friend: “They punched her while her ex was inciting her”