Friends of Books had a picnic together in Debrecen – with photos – Debrecen news, Debrecen news | News of Debrecen and Hajdú-Bihar counties

Friends of Books had a picnic in Debrecen with photos

Debrecen – The movement promoting reading started on May 4, and they have already held their first joint program. Friends of Books spent the afternoon in the Great Forest Park.

Debrecen has a strong and far-reaching tradition of literature and book culture. The books have made the city great, one of the most important centers of Hungarian culture, such as the Reformed College, which has many literary excellences for the country, and we will not forget the oldest company in Hungary, Alföld Nyomda, which is celebrating its 461st anniversary this year.

Our literary workshops are built on this solid foundation, and our highly successful book events, such as the Debrecen Festive Book Week, the Night of Literature, the Térey Book Festival, are expanding almost every year, for example, the city’s excellent prose writer spoke for more than a week. , About Sándor Tar, and launched more and more initiatives in the city, all of which focus on how to bring this beautiful heritage to life.

Last June, the city applied to the UNESCO Network of Creative Cities, the Cities of Literature group, and although it failed to join the network, a like-minded team recruited to work to find a place for literature in the city ever since.

As a result of such cooperation, the goal of the Friends of the Book network was born this spring, to promote the joy of reading as widely as possible for those for whom book culture, reading, is a part of everyday life anyway.

The network launched on May 4th, has already joined the initiative that day, and is now organizing its first program. 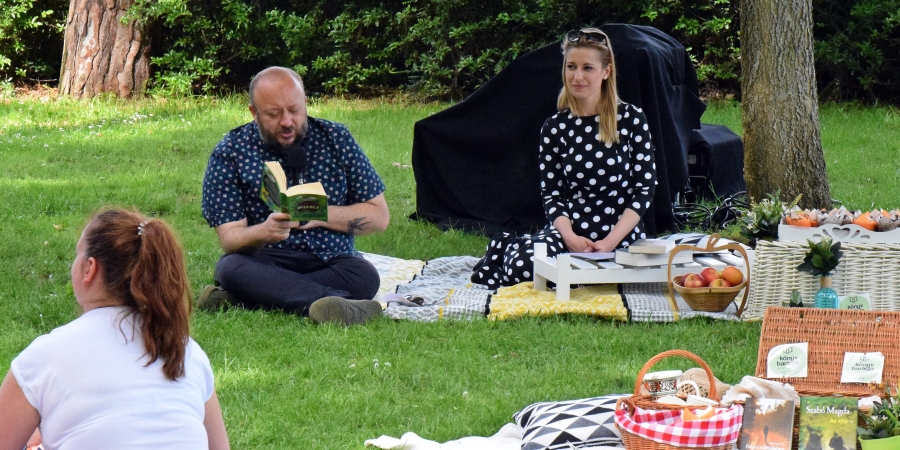 In the beautiful, sunny spring weather, you can’t find a better place to relax than to grab a book and settle down in the shady Nagyerdei Park, next to Lake Békás. Friends of the books did the same, and they spent a great afternoon outdoors.

– We thought that it would be good to meet sometimes in more casual conditions, not only at literary events or in the theater, not only by listening to poetry readings, but also by coming together and sharing our dear readings, this is what the first Book friends picnic

– explained Deputy Mayor István Puskás, who read to the audience from one of his favorite joint books with his son, Dr. Jo Nesbø’s series of Dr. Proktor’s Pukipora series.

He read an excerpt from Anita Balogh’s own book, Light in the Dark, from Patrícia Becsky-Nagy’s Wass Albert Tale about the Forest, and a taste from her daughter, Dóri Becsky, from Lálja Magda Szabó.

During the picnic, several people joined the Friends of the Book network and took over the sticker “I am a friend of the book”, such as the Cívis Porta, the Csokonai Theater, the University University and National Library of Debrecen, the DES Theater, the Dóczy Grammar School of the Debrecen Reformed College, György Dózsa Primary School in Debrecen, the fonetArt cultural startup, the Association for the Future of Ondód, and the Zsuzsi Forest Railway.

After the picnic, the adults embarked on an educational walk led by ecologist Lajos Kozák, who tells the story of the Park Forest and how nature and literature come together. For the little ones, the magical fairytale island of Pagony in Debrecen awaited the readers on the blankets.

The coronavirus epidemic failed last year, so on this special afternoon, the Magda Szabó Promenade was officially inaugurated, which is decorated with works by students at the Medgyessy High School.

And of course, the picnic was also a call, as they are still looking forward to any educational, cultural institution, business or NGO that can agree on at least one thing, namely that the book is our common value.

– The goal is to build a network of Friends of the Book in the city that works together to promote book culture and, at the same time, to build the culture of Debrecen.

About the network, logout, and other programs a debreceliterature.hu can be found on the website.