After the coronavirus break, the popular Prague – Prčice March is produced again on Saturday, May 21. But he will not completely return to the old dormitories. The interconnection of individual already completed sections of building IV is to blame. railway corridor between Votice and Sudoměřice in the Tábor region. The participants will not get home from Heřmaničky by train, as usual. 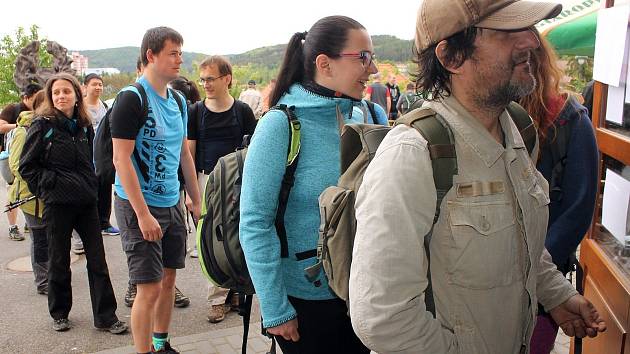 At the start of the march to Prčice in Týnec nad Sázavou, queues formed whenever tourists brought a train. But no one will see such a picture this year. No one will get to the march from the starting places without prior registration.

“Buses from Prčice will take the torches instead of to Heřmaničky at the railway station in Olbramovice,” confirmed one of the organizers of the event, Dana Horáková. That is, including the shuttle bus service between Prčice and Heřmaničky.

Due to the fact that the torchers sign up to participate in advance until May 19, Horáková estimated this year’s participation at about a thousand people.

Therefore, on Saturday, May 21, no one will register directly at the start of each route. But even that should change to a proven form with next year.

SEE: Construction of the railway corridor of the work and the Prague – Prčice March

A total of twenty-one routes will lead to Prčice, one of the parts of the Sedlec-Prčice two-town district, once a seat located in the Benešov district, which now falls under the Municipality of Sedlčany in the Příbram Region. Seven of them are located in the Benešov region. Starts are set from Týnec nad Sázavou – 42 km, Čerčan 48 km, Benešova – 42, Bystřice – 34 km, Olbramovic – 35 km, Votic – 23 km (children’s route) and Střezimír – 36 km.