The new XM is the most powerful vehicle in its sports department to date.

M GmbH celebrates its 50th birthday in 2022. For this reason, BMW’s internal sports department is bringing back the legendary logo with staggered semicircles in blue, violet and red, as well as some classic paint finishes. But the true highlight of the anniversary year is a completely new car, with which M GmbH should not make friends with climate activists. The near-series study of the power SUV called Concept XM celebrated its world premiere at the end of 2021. In the meantime, the production version has completed test drives on public roads. Specifically, heavily camouflaged XM prototypes (“Erlkönige”) are currently on Austria’s roads.

Despite the camouflage, it is easy to see that the production model WILL hardly differ from the Concept XM study. According to BMW, production will start at the end of 2022 – i.e. still in the anniversary year. The market launch will then take place in spring 2023. The XM is the most powerful series-built M model. Like all of the brand’s larger SUV models (from the X3 onwards; electric models excluded), the new power SUV will also be built at BMW’s Spartanburg plant in the USA. The land of unlimited opportunities is also likely to become the newcomer’s main sales market. The XM should also sell well in China and the United Arab Emirates. Although the vehicle is based on the platform of the X5, X6 and X7, it still has no direct offshoot. It is also an independent M model – by the way, only the second in the history of the internal sports department. It follows in the footsteps of the legendary M1, which is the only extended model from M GmbH to date. Many real brand fans will probably be a bit angry that the sports department is putting an SUV weighing over 2.5 tons on the wheels instead of a sports car trimmed for driving dynamics and weight optimization. The financial professionals in the group have clearly prevailed here. Despite the climate debate, most money can currently be made with large, powerful SUVs.

The XM is over five meters long and weighs over 2.5 tons © BMW Group

Drive slightly weaker than in the study

The short term of every real M vehicle is the performance. In this regard, the XM should not disappoint its fans. It will take over the drive train installed in the near-series study, but will have to do without some power. A newly developed plug-in hybrid drive is installed in the Concept XM, which combines a supercharged V8 engine with an electric motor and generates a peak output of 550 kW (750 hp) and a maximum torque of 1,000 Nm. In the production model, on the other hand, the drive duo achieves “only” 650 hp and a maximum torque of 800 Nm. Later, however, BMW could actually add a 750 hp version. Driving performance has not yet been revealed, but this should be quite impressive for the all-wheel drive vehicle despite the high curb weight. The purely electric range of up to 80 kilometers with an externally charged battery before starting the journey could at least appease the climate activists somewhat. 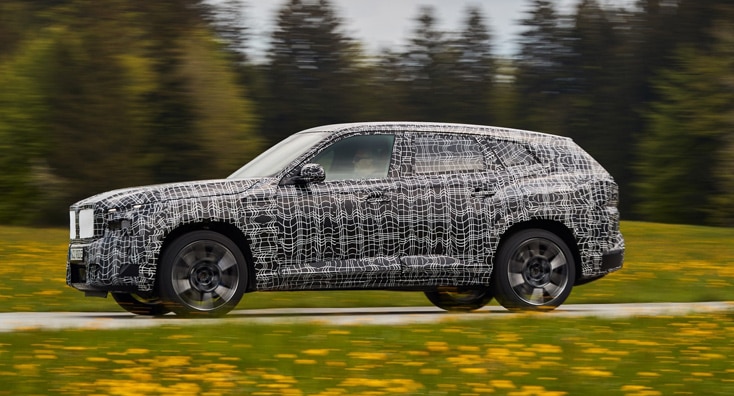 The wheels are up to 23 inches in size © BMW Group

For their current test drives on public roads, the development and test engineers put together a demanding and varied route profile that they found in Austria. The interaction of the new eight-cylinder engine and the electric motor integrated in the transmission housing should thus be able to be tested and refined under the expected conditions: from intermediate sprints on the motorway to winding country roads to stop-and-go traffic in the city. According to the engineers, steep mountain passages and tight switchbacks offer the ideal terrain to demonstrate the driving dynamics potential of the all-wheel drive (M xDrive) including the electronically controlled differential lock in the rear axle drive.

In order to appease the die-hard M fans, BMW has put a lot of effort into making the XM as dynamic as possible. There is an almost ideal 50:50 balanced eight-load distribution and sophisticated chassis technology. The future M flagship will be equipped with an adaptive “M suspension Professional” as standard. This includes: a model-specific version of the suspension and the electronically controlled shock absorbers and – for the first time in an M model – an electromechanical roll stabilization with 48-volt technology, which with the additional function “Active Roll Comfort” not only reduces rolling movements due to one-sided bumps in the road, but at the same time should actively adjust the body height on the corresponding side of the vehicle. The integral active steering is also part of the standard equipment and is intended to promote agility and cornering dynamics. In addition, there is a sports brake system adapted to the heavy weight and wheels up to 23 inches in size.

The countdown to the world premiere of the XM accompanies the anniversary activities on the occasion of the 50th anniversary of M GmbH. “With the debut of the BMW XM at the end of our anniversary year, we are looking to the future in which BMW M will continue to break with convention and push boundaries,” says Franciscus van Meel, CEO of BMW M GmbH. “Electrification gives us new opportunities to showcase the unique M feeling in a fascinating way and to bring it onto the road.

Design of the serial study

BMW has not revealed anything new about the exterior and interior design. Here you have to continue to refer to the study from the previous year. At the front, the Concept XM has the new face that will adorn all of the brand’s luxury vehicles in the future – it’s already on board the all-new 7 Series and the facelift of the X7. In addition to the powerful, horizontally aligned and outwardly narrowing kidney grille, the frame of which is illuminated in the study, the division of the front lights into two separate modules catches the eye. The daytime running lights are located in the narrow upper light module. Typical double bars and the XM logo are integrated in the kidney. 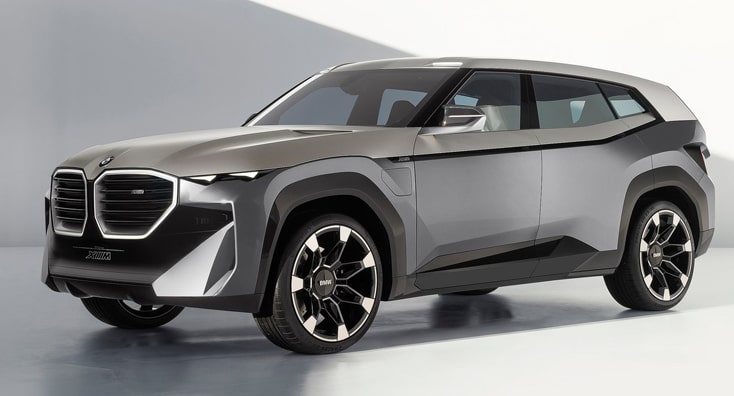 The Concept XM also conveys the impression of an automotive bodybuilder when viewed from the side. Here, the SUV proportions meet a long bonnet, a roof line that slopes backwards and a window graphic that becomes significantly narrower towards the rear. The roof is set off in a contrasting color by black-colored A-pillars. In the study, narrow LED searchlights are integrated into the roof area above the A-pillars. It remains to be seen whether these will make it into the production model. The area below the wide D-pillars, which are also in a different color, takes some getting used to. Here, the jagged rear lights protrude quickly into the bodywork as far as the rear wheel arches. The side skirts and angular wheel arches rely on dark plastic coverings. 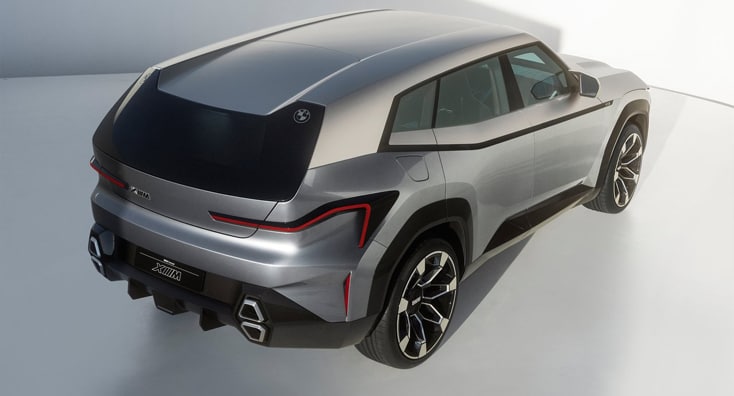 At the rear, the Concept XM also breaks new ground. The disc is actually the highlight here. On the one hand, it is quickly and seamlessly inserted into the rear section, on the other hand, two BMW logos are lasered into the rear window, each of which is located below both roof bars. This special feature can probably be seen as a homage to the legendary M1, which is still the exclusively expanded model from M GmbH to this day. In the lower area of ​​the rear view, the flared wheel arches ensure a powerful stance. This is also underlined by the narrow rear lights in the L-shape typical of the brand, which stretch almost over the entire width of the rear. The rear apron is dominated by the striking twin tailpipes of the exhaust system, which has both two flanges and two pipes.

The driver’s cockpit layout is strongly based on the electric flagship iX. Here there are two displays sitting under a curved glass panel: the digital instrument cluster and the touchscreen for the infotainment system. The latter can also be operated via the iDrive controller (rotary/push button on the center console), via the steering wheel buttons or by voice. Of course, the XM is always online, receives software updates “over the air”, smartphones wirelessly, supplies navigation data with real-time information, can charge cell phones inductively and enables remote access to vehicle data via smartphone app. There is also an integrated head-up display and a display style that uses the three characteristic M colors. 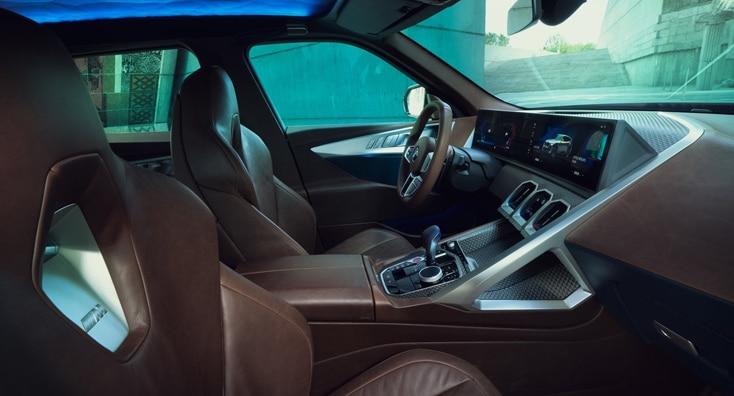 Despite all the sportiness, a car of this caliber has to be comfortable, if not luxurious. That’s why BMW relies on high-quality materials such as leather with a vintage look, copper and carbon. The manufacturer even promises a lounge feeling for the rear. While the brown of the leather dominates at the front, the rear area is kept in a green color (petrol). The large rear bench seat has deep seat pans and is upholstered in velvet with diamond-shaped quilting. Only the diamond-shaped area of ​​the headrests is leather. When it comes to the floor, BMW has apparently used its express subsidiary Rolls Royce. A high-pile carpet with a diamond pattern is installed here in the XM Concept. However, you WILL have to do without this in the production model, just like the two-color concept between the front and rear seats. (ts)

Long-distance bus provider Itabus will start in Austria in 2023