Russia has intensified its propaganda war against Sweden by producing bus stop ads accusing the peaceful Scandinavian nation of being Nazis.

The hybrid warfare strategy comes as Sweden prepares for NATO membership, abandoning decades of neutrality in light of Moscow’s military aggression against Ukraine.

The provocation is hot on the heels of Russian Foreign Minister Sergei Lavrov’s inflammatory comments that “Hitler had Jewish blood,” which called for an apology from Israel.

The campaign has seen ads appear in Russia depicting various Swedish national heroes as Nazis with the slogan: “We are against Nazism, they are not.”

The word “we” is in the color of the Russian flag and “they” in the colors of the Swedish flag. Selective quotes appear next to each image that pretends to paint the figure as a Nazi.

Astrid Lindgren, the creator of one of Sweden’s test stone cultural products in Pippi Longstocking, is singled out for her alleged Nazi attitudes, as well as Ikea founder Ingvar Kamprad and filmmaker Ingmar Bergman.

Another poster paints Sweden’s King Gustaf V as a Nazi. 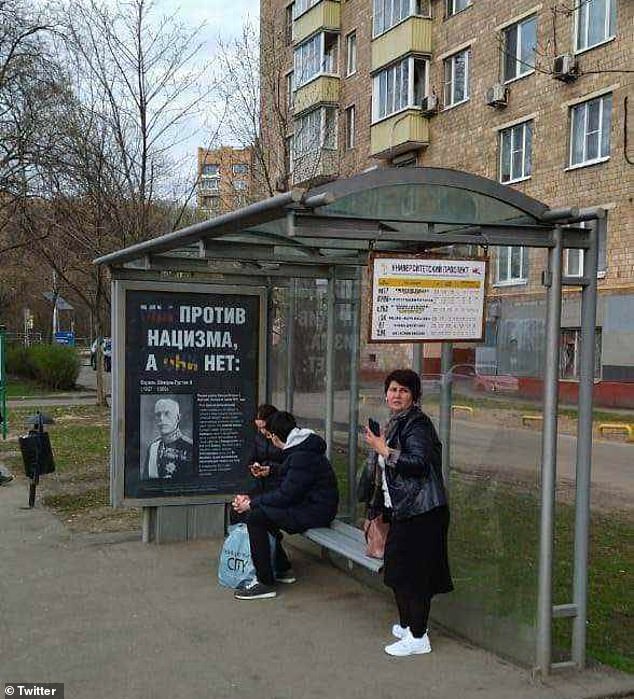 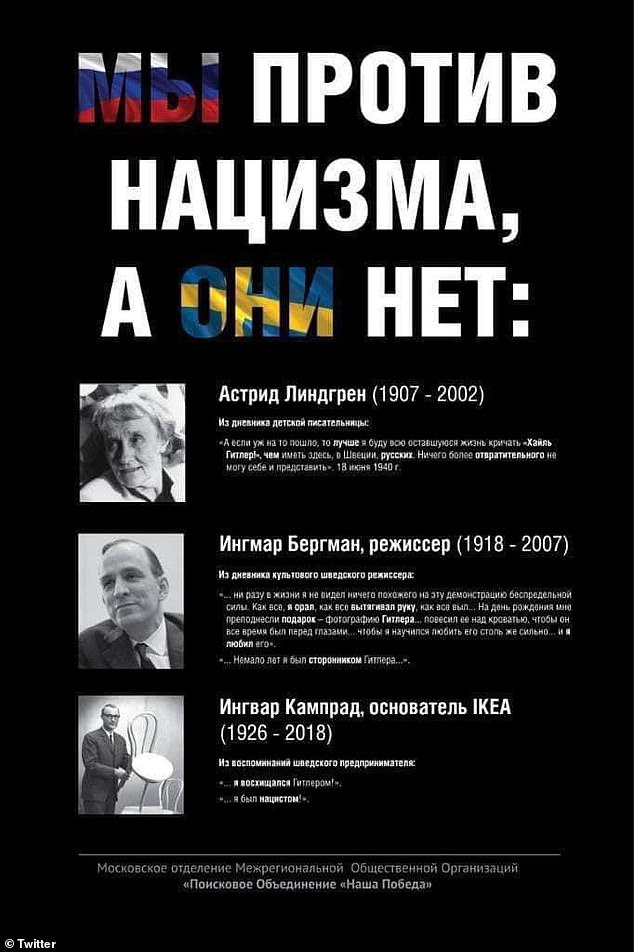 The slogan at the top is: ‘We are against Nazism, they are not’. The hybrid warfare strategy comes as Sweden prepares for NATO membership, abandoning decades of neutrality in light of Moscow’s military aggression against Ukraine

The Swedish Foreign Ministry recognized the poster campaign as a work by the Russian group “Our Victory”.

“We do not intend to engage in a public polemic with the Russian organization ‘Our Victory’, which is reportedly behind these posters,” said a spokesman for the Foreign Ministry.

“In Russia, slander about ” Nazism ” has been repeatedly used against countries and individuals who are critical of Russia’s actions.”

Counter-ads have appeared outside the Russian embassy in Stockholm with text in Cyrillic.

At the bottom it says: ‘Dear checkists (sic) and other employees of the Russian embassy. Is it difficult for you to go to work? Are you ashamed at the end of the day? It may soon be too late to quit. Contact us for a consultation on political asylum. Coffee on us! 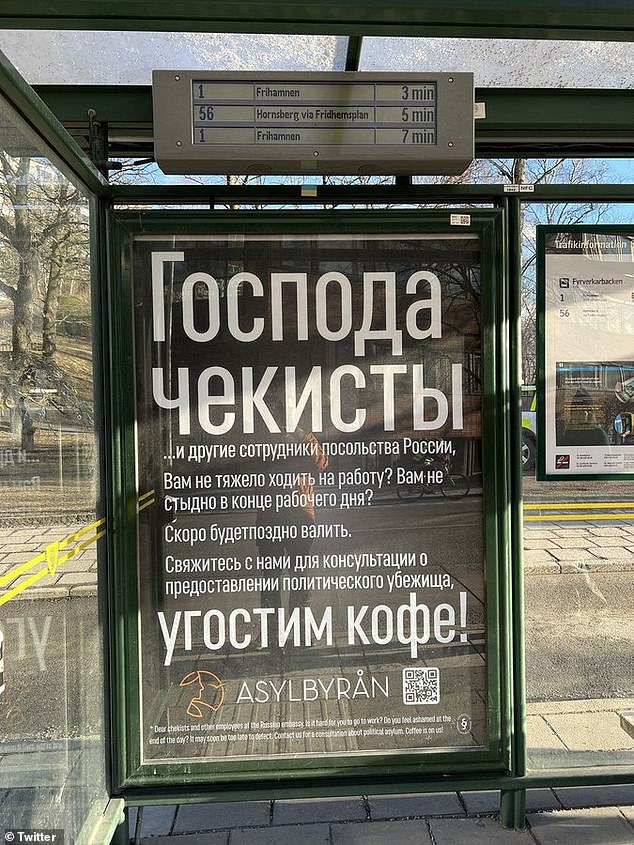 This ad in Russian appeared outside the Russian embassy in Stockholm 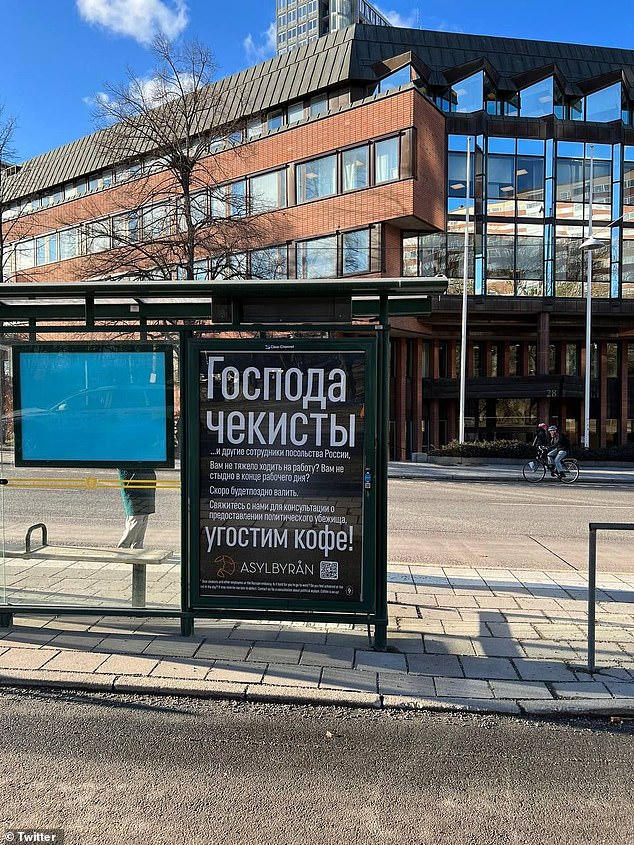 At the bottom it says: ‘Dear checkists (sic) and other employees of the Russian embassy. Is it difficult for you to go to work? Are you ashamed at the end of the day? It may soon be too late to quit. Contact us for a consultation on political asylum. Coffee on us! 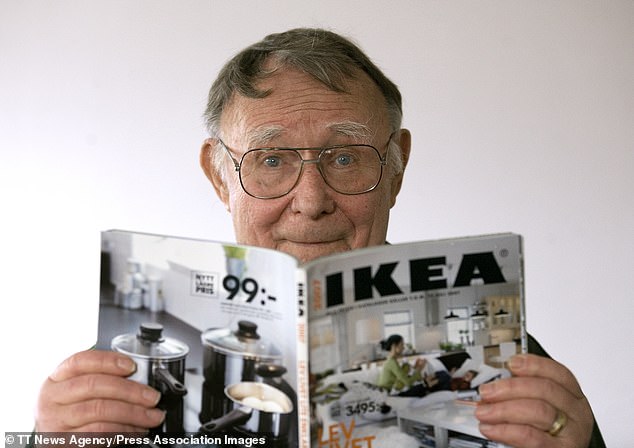 Ingvar Kamprad, who died in 2018, is the founder of the global furniture store giant IKEA 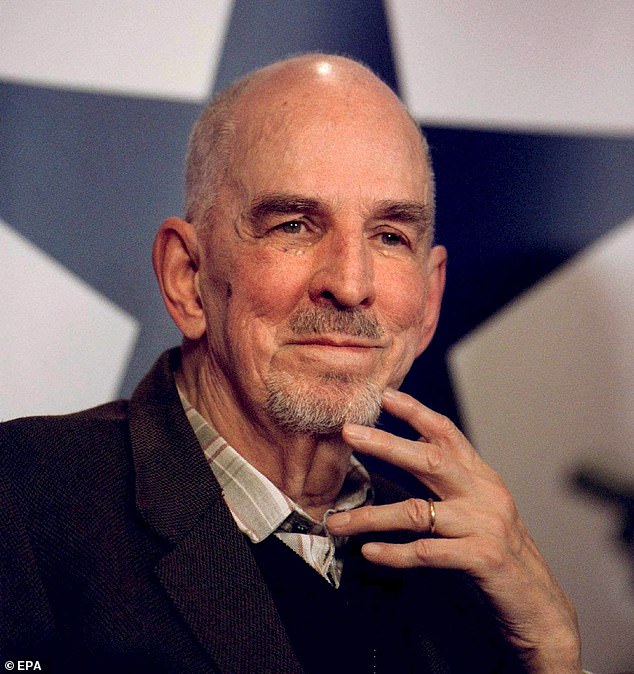 The Swedish film director Ingmar Bergman, who died in 2001, directed many classic films, including The Seventh Seal from 1957. 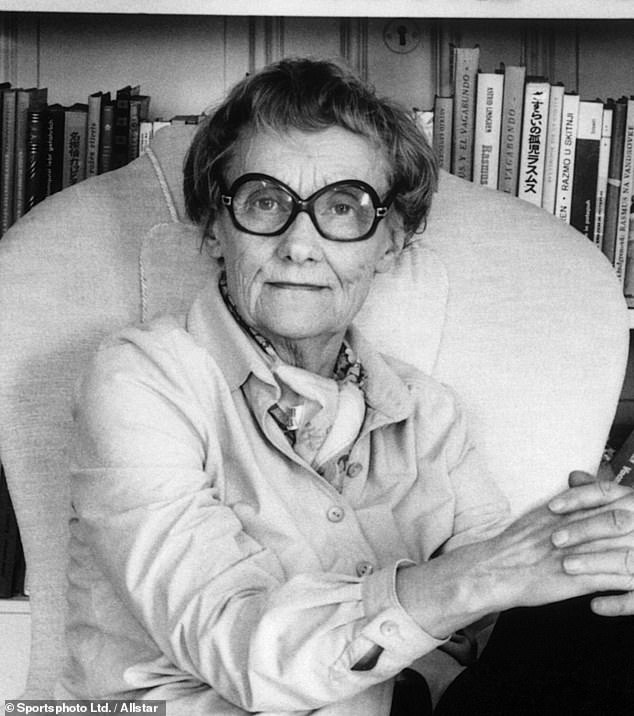 – But it is important to say right now that Sweden can become a target for an influence campaign by foreign powers, she said.

What did they really say?

A Russian poster campaign that accuses famous Swedish people of having Nazi sympathies.

The author of beloved children’s books based on the character is quoted by the Russian propaganda campaign to say:

“And so I think I’d rather say ‘Heil Hitler’ all my life than get the Russians over us. You can hardly imagine anything so awful.

Lindgren wrote the line in his diaries from the Second World War. She was also a committed anti-Nazi who wrote that Hitler was a “small, unknown German craftsman who had become” his people’s nemesis and cultural destroyer “.

The Swedish author was quoted as saying of a Nazi meeting:

But Bergman completely dismissed the Nazis when the images of the concentration camps emerged. “When the truth finally conquered my resistance, I was overwhelmed by despair, and my self-loathing, which was already a heavy burden, accelerated beyond the bounds of perseverance,” he wrote.

The Ikea founder was quoted as saying:

‘I was a Nazi! I admired Hitler!

Kampard was indeed a Nazi sympathizer during the war, but later described this as “the biggest mistake of my life”.

“It is important that all Swedes, and not least you in journalism, realize that there is a risk that foreign powers will try to influence the Swedish debate climate.”

There were suggestions that the poster campaign was part of a strategy to prepare the ground for military action against Sweden before it falls under NATO’s umbrella of defense, much as Moscow did against Ukraine.

Sweden’s former prime minister Carl Bildt said: “Are there any limits for these guys? Are they preparing a ‘weaning’ operation against Sweden as well?

“I believe that this will further strengthen the support for Sweden joining NATO.”

Accusing Western countries of Nazism is part of the motivation for their own war, says Mikael Östlund, head of communications at the Swedish Armed Forces.

– This is probably aimed at the own population. This has been one of the motivations for the war in Ukraine as well.

“This follows Russia’s story and is in line with the propaganda that the Kremlin and Russian state media are pumping out. We have seen that they have done it against Western countries in the past as well,” he said.

“Then you know that you will probably reach the Swedish media.”

“If I am to make a qualified guess, it is aimed at the Russian population but also for the purpose of reaching Swedes.”

At the same time, Russia doubled and accused Israel of supporting neo-Nazis in Ukraine in a bitter quarrel triggered by Sergei Lavrov’s comments that Adolf Hitler had “Jewish blood.”

Israel criticized the Russian Foreign Minister yesterday, saying that his claim – made when he spoke of Volodymyr Zelensky who is a Jew – was an “unforgivable” lie that humiliated the horrors of the Nazi Holocaust.

Lavrov said: ‘I think Hitler also had Jewish origins, so it means nothing. For a long time we have heard the wise Jewish people say that the greatest anti-Semites are the Jews themselves. ‘

Lavrov’s comments caused outrage around the world, with Zelensky condemning the “anti-Semitic” comments that showed that “Moscow has forgotten all the lessons of World War II”.

NATO expansion: Measures to recognize Finland and Sweden “likely to drag out time” amid objections from Turkey

Turkey’s concerns ‘all legitimate and must be addressed’: NATO chief