There are events that become part of the history of one’s sport or sometimes, more commonly, of sport in an absolute sense. The current Autodromo Enzo e Dino Ferrari in Imola, once called only by the name of the Drake’s son, Dino, was the scene of some of these milestones, sometimes pleasant, sometimes fatal. That of 1982 is one of those episodes that are remembered not too willingly, notwithstanding the home triumph Ferrari license plate. It was the victory of a driver, Didier Pironi, over another driver, Gilles Villeneuve. For one of the two, however, it was the victory of one friend over another, disregarding some alleged team orders. Insiders and enthusiasts still debate on this episode. For one of the two, however, that was the last ride.

The days before the third world championship race on the Imola circuit were turbulent. What went down in history as the war between the FISAthe International Federation of Automobile Sports, a direct emanation of the FIA, and the SEALthe Formula One Constructors’ Association, led by Bernie Ecclestone and which brought together the so-called “garages “ British. There was a dispute between the stables belonging to or close to the various groups over the technical regulations and compliance with the minimum weight allowed, an article that had twisted several times the arrival rankings of the Brazilian and Long Beach GPs. Some teams belonging to the FOCA, to combat the technical advantage of rivals equipped with turbo engines, in fact, ran underweight and, at the end of the race, filled with additional water. The FOCA team then threatened to boycott the Romagna race, even if they asked to postpone the event in July, in order to have the time necessary to prepare the cars for the continuation of the championship. This request also represented an amendment to the regulation that violated the Agreement of Concord. On the other hand also the teams “Legalist” they were in turmoil with FISA, since President Jean-Marie Balestre wanted to put his hand to the regulation scheduled for 1983, limiting the use of turbo engines, also in violation of the Agreement of Concord in this case. Lotus, Williams, McLaren, Brabham, March, Ensign, Fittipaldi, Arrows and Theodore did not participatetogether with Talbot-Ligier that he did not have the car ready to comply with the regulation. So only fourteen cars signed up: Ferrari, Renault, Osella, Alfa Romeo and Toleman, to which Tyrrell and ATS were added on Friday, avoiding, at least in part since the boycott was always around the corner, the possibility of the organizer to cancel the event if they were less than 13 cars were present at the start.

After a Friday under the banner of Alain Prost in Renault, the transalpine cars monopolized the first two places on Saturday, with Renè Arnoux imposing himself with a time of 1’29 “765. Second was Prost with a delay of five tenths, while Villeneuve and Pironi finished in third and fourth place, with the French trailing behind over two seconds from the best time. Alboreto fifth on Tyrrell at three and a half seconds, followed by the Alfa Romeos of Bruno Giacomelli and Andrea De Cesaris. Teo Fabi with Toleman, tenth, and Riccardo Paletti with Osella, thirteenth, took the first qualification of the year.At the end of the timed tests Ken Tyrrell, owner of the homonymous team, filed a complaint I check the cars with turbo engines. For many it was the attempt by the FOCA to jeopardize the verdict of the race, which, however, did not have the hoped-for luck.

Only twelve cars started from the starting grid, with Warwick forced to retire due to a breakdown on his Toleman during the alignment lap, while Paletti started from the pit lane two laps later due to a technical failure. At the first detachment of the Tosa the leading positions were unchanged but, at Piratella, the two Ferraris overtook Prost, who would have retired on lap seven, leaving fourth position in Alboreto. After lengthening in the first laps, Arnoux found himself tailed by the two Ferraris around lap twentieth. On lap 22 Pironì overtook Villeneuve, who returned the favor four laps later. It was the first flash of the last duel among the due. At the next lap the Canadian took the lead overtaking at the Rivazza, but was overtaken by the two Frenchmen on lap 31, returning to third place in the blink of an eye at the Tamburello. At Piratella, however, the leading trio was again made up of Arnoux first, Villeneuve second and Pironi third. A battle was staged on the Imola stage no holds barred which reassured the audience of the meager line-up. 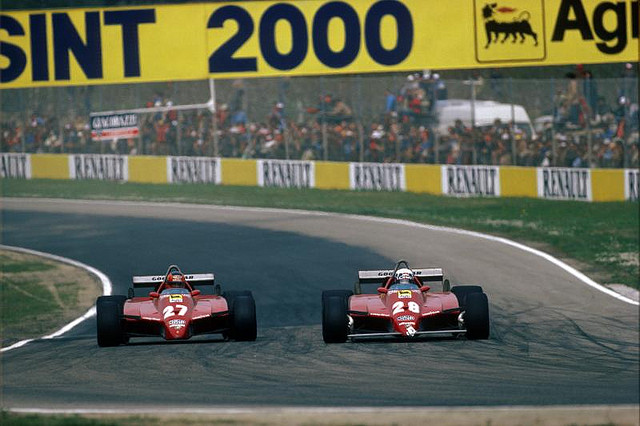 One of the overtaking of discord at the detached della Tosa (Source: wikipedia.it, copyright free)

At forty-fifth of the expected sixty laps, Arnoux’s Renault engine went up in smoke, eliminating one of the protagonists in the jubilation of the fans of the Red. After that retreat, a black sign with yellow writing appears on the wall of the Ferrari pits “SLOW”that is to say “piano”. For Villeneuve that signal was to communicate the need for keep the positions. There must be something that went wrong in the pre-race briefing, a dispute during which Mauro Forghieri, Technical Director of the Maranello team was not present. In hindsight, his presence would be made clearer communications, by his own admission in a recent interview with the historic journalist de The Rest of the Carlino Leo Turrini: “Forty years have gone by and I still don’t say a remorse but a regret. I never skipped a race, I was the Scuderia’s technical director. But that Sunday forty years ago I wasn’t in the pits, I had an undeniable commitment The friendship between Villeneuve and Pironi ended, which was authentic and profound, because the wall lacked the ability to give the right directions. I would have given precise directives. And nothing would have happened “. Indeed, something happened. Instead of a quiet save to the finish, Pironi lit a furious duel with his teammate, made up of overtaking and counter-overtaking in the last laps. At the 52nd, the French overtook Villeneuve who, on the penultimate passage at the braking of the Tosa, resumed command. On the last lap, Pironi slipped his mate to the Tamburello, strenuously defending himself for what remained to run, until he crossed the finish line triumphantly.

The podium ceremony saw a happy Pironi and a funeral Villeneuve. The Canadian, according to the stories of his friend the lawyer Carlo Costa, speaker at the Dino Ferrari circuit, he didn’t even want to participate at the closing celebrations and withdrew from the microphone of the interviewer from Imola. The reporter from Autosprint Mario Donniniguest on our web radio Radiabowas present that day in the stands and tells: “I didn’t even realize who won. For me Villeneuve had won, for us fans it was a red party. I didn’t understand what had happened between the two “. For the record, third came Michele Alboreto, who is also a mute witness to that pillar of motorsport history which has its foundations in ours. Valley of the engines.

An interview with Villeneuve after the events in Imola (YouTube – Benia06)

Challenger San Marino, Meerbusch, Lima and Chicago: The results with the detail of Day 2 (LIVE)

New Pos in San Marino, here is the Usc guide for correct use

‹ Shoplifters steal perfume and handbags for 1000 euros on Meir | Antwerp › The construction of metro D began. It was killed by a dozen enk and Hibv joke about banners