Prague carries out property shifts with the state, thanks to which new flats are to be created

/ PHOTO GALLERY / Municipal politicians praise the pace at which property shifts with the state are progressing after the change of central government. Already last year, the Royal Vinohrady University Hospital acquired land from Prague for the construction of a “trauma center”, ie a new hospital monoblock. In return, the capital received a rescue service station in 28th Regiment Street, the remaining part of the Letná tennis courts and a villa in Říčanská Street. 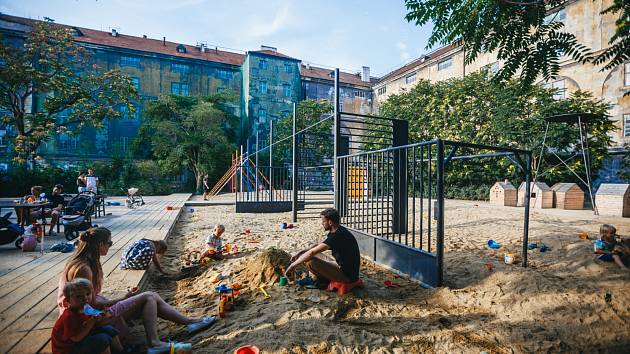 Karlín Barracks. Playground on the square.

According to Councilor Jan Chabr (United Forces for Prague), two other large transactions are in the phase of “fine-tuning details”. This is the case of a shift in which the Prague lowlands will transfer most of their property to the state in the area of ​​the Hospital in Bulovka, where forty buildings are in mixed ownership. “We are completing assessments and details of the shift, such as entrances to the premises, easements, etc. The transfer of most real estate to the state will facilitate the modernization of the hospital, in which several billion crowns need to be invested,” Chabr emphasized. 7 billion crowns.

Prague will keep four buildings in a large area, which now houses the former boiler room, apartments, emergency room and leather department. The intention of the metropolis is to let the medical facility “reach out” and to build housing for mothers with children and also a cultural center in their place within fifteen years. In return, Prague will acquire land and buildings in several places. First of all, the classicist Karlín Barracks with an estimated price of over a billion crowns. “A change in the zoning plan is currently taking place there. Our vision is to transform the complex into another new attractive city center with central student accommodation features. In combination with the nearby emerging project Florenc 21, it would be a radical reconstruction of one of the most disgusting places in Prague, “commented Petr Hlaváček (United Forces for Prague) on the plans of the capital in this locality.

Repairs in the western part of the Prague ring road are beginning. The restriction will last for three months

The metropolis will also acquire property from Bulovka land in the Bohdalec brownfield in Prague 10. The already completed urban study there envisages the creation of another multifunctional district with an open park and approximately three hundred city apartments. The shift also includes a house at Hybernská 2, larger plots in Vršovice and smaller ones in Malá Strana. In all cases, the acquired real estate could be used to increase the capacity of schools.

The new look of the Veleslavín Chateau

The goal of both parties is to confirm the second large “barter” in the Real Estate Cadastre by the end of the year. Thanks to him, after several years of efforts, Prague will find the Veleslavín Castle complex, in which temporary classrooms and a kindergarten for Ukrainian children should start operating within weeks to months. After the creation of the project and the planned major reconstruction, the chateau complex can be at the same time with the seat of the school, palliative care services and the cultural hall, which Prague 6 does not currently have. The state, on the other hand, will have the listed Faust House, which houses (rented) a pharmaceutical factory, a car park at the Homolka Hospital, a fire station and land in the Balkans and Riegrovy sady. Their merger is to prevent the auction and “insure” the existence of a gardening colony or sports ground TJ Sokol Vinohrady.

What will the Prague Market Square look like in 10 years? The competition already has a winning architect

Other real estate is currently the subject of discussions between the Prague self-government and the Office for Representation of the State in Property Matters. Among other things, nine firefighters owned by the city with a total value of about a billion crowns. On the other hand, there is the Prague Services complex or the Na Stírce swimming pool. “Unlike the more distant past, Prague has been trying to expand its assets for the last few years in order to prevent unwanted sales in specific cases and especially to expand the range of public services provided,” added councilor Jan Chabr.

In Prague, a new tram loop is operating near the Depo Hostivař metro station