The Slovak public is currently living mainly in a spy case about the detention of several people they were supposed to pick up for Russia. Probably the most resonated with the company is the “chat” between Russian diplomat Sergei Solomasov and the head of the headquarters, Bohus Garbar, who are even immortalized in the video.

But it seems that this is not a unique move of Russia in Slovakia. The embassy and its staff have unfortunately in the past attracted attention to themselves and their activities.

A large number of diplomats

The Russian Embassy has been housed in the Bratislava villa of lawyer Pavel Fabry for years. In the past, the famous property housed the embassy’s predecessor, the Soviet embassy. At present, Godrova Street, on which Russian diplomats are based, has been replaced by Boris Nemcova Street. It is the diplomats who work in Slovakia in the colors of the Russian Federation that have been raising a number of questions over the years.

The biggest controversy opened up with the number of Russian diplomats in Slovakia. Compared to other embassies, it was disproportionately high. In 2020, for example, the daily N reported that the embassy staff had up to 75. According to the official diplomats, Russia had 45 in our country, and there were still three dozen other embassy employees.

According to it, in 2020 America had 36 diplomats in Slovakia, Germany 19 and China also sent the same number.

A year later again we informed that the Russian side has 30 diplomatic staff in Slovakia. Currently according to the official list of the Embassy of them the portfolio consists of 18 diplomats.

Are you wondering what is really strange about the fact that the Russians have a disproportionately high number of diplomats in our country? Members of the secret services can easily hide in the ranks of such workers. Semi-pathologically speaking, Russia can smuggle spies among embassy staff.

We asked Matej Kandrík from the Stratpol platform whether similar camouflage is really possible and practiced in practice. “Certainly yes. After all, the form of diplomatic cover is a really common form of how such things are done. High numbers at the embassy or even in the Czech Republic rightly raise eyebrows, “ said for Startitup.

He noted that this raises the question of why the Russian Federation also needs a massive representation of diplomats in a relatively small country like Slovakia. Kandrik’s words about the huge number of Russian diplomats in the Czech Republic two years ago were also confirmed by Watchdog portal. The Russian Embassy in Prague had 43 diplomacy staff and another 77 staff members.

A couple from the video

The most recent case, which made visible one of the employees of the Russian embassy, ​​concerns the already mentioned video, in which the “journalist” Garbar and Rus Solomasov starred. He brought the recorded secret meeting Denník N.

A contributor to the well-known Main News portal was secured by security forces along with other people who were to “vouch” for the Kremlin. Soloms himself is listed on the official embassy website as a senior assistant to the Defense Attaché.

Solomasov tells Garbar that Moscow mentioned that Garbar was “good boy and has a lot of friends – so does the Slovak mafia “. According to him, Moscow therefore decided to “hunter ’.

He has to reach people who love Russia, want to want to be with him, want money and have secret information. Another group they have made up of acquaintances who are still considering whether to form with Russia. But he will hunt them himself, says Solomas.

“Identify people who would be good for cooperation, “ summarizes Garbár. He accuses Solomas in the video and asks if he still has anyone available.

A Top News contributor says he would have to think. He probably knows pro-Russian people, but they are small fish. Solomasov explains that he needed information from inside NATO or the European Union.

The video, which provides the security component, also captures Solomasov giving Garbar a thousand euros. The conversation shows that half should go “To a friend“, While the second five hundred to Garbar.

“We could still get to Nada. Would that be interesting if I became friends with him? ” Garbar asked at the end of the video. “He will not be with Russia. ” Solomas answers immediately.

He claims it would be dangerous. Garbar says he would not know because he would be “pro-American ’. “Not,” Solomas answers. However, he says his deputy or assistant would be appropriate. We wrote about the video in this article.

The chapter itself is the expulsion of Russian diplomats from Slovakia. The Slovak government has taken this step twice. In 2018, for example, we expelled one of the Russian diplomats also for espionage. An embassy worker packed his bags and waved in Bratislava on November 22 this year.

According to information diary We are from the environment of the diplomacy department it was really a spy. According to the then Prime Minister Petr Pellegrini, the toxic diplomat was performing activities that were not in line with the activities that a person similar to the EU and NATO member states should perform.

In 2020, Slovakia again expelled Russian diplomats, this time three. They got a stop sign in Slovakia in connection with the case of the murder of a Chechen asylum seeker. The accomplice of the murder got to Germany in 2019 on Slovak visas, which were issued to him in St. Petersburg. The expulsion of diplomats just mentioned was a reaction to the misuse of Slovak visas. He came up with the information first Denník N.

Russian diplomats seem to have packed their bags in Slovakia quite often. Another three employees of the embassy were waiting for a one-way ticket from Bratislava in 2021. The government of Eduard Heger shortened the diplomat’s stay in response to the events in the Czech Republic at the time.

Our western neighbor claimed that the Russian secret service was behind the explosions of warehouses in Vrbětice in 2014. The Czech Republic then sent “up to 18 Russian diplomats.

The current government has only recently returned to the tradition of shortening the stay of Russian diplomats in Slovakia. She sent three embassy staff back to Russia this Monday.

it was probably that they had acted in violation of the Vienna Convention on Diplomatic Relations in Slovakia. Slovakia to this step acceded after an assessment of the situation by the domestic intelligence services.

The Russian embassy in Bratislava also spoke in a positive spirit about the controversial motorcycle gang Night Wolves, who also have fans in Slovakia.

For example in 2015, they defended bikerswho planned to travel from Berlin to Moscow via Bratislava. This initiative was called provocation. Russian diplomats have denied this.

“This is not a provocation. They want to visit the capitals of battle and have to keep the fallen soldiers. They also plan to come to Bratislava on May 2. They want to lay wreaths at the monument in Slavín, ” At that time, the secretary of the Russian embassy in Bratislava, Sergei Cherkalin. 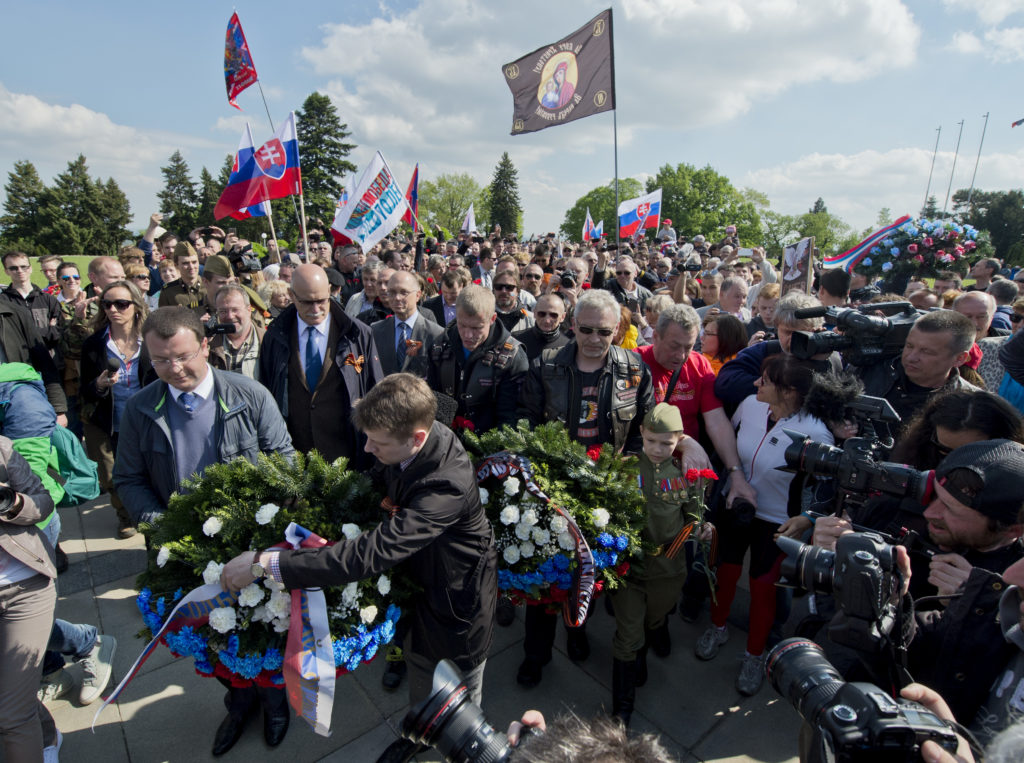 Just for the sake of interest, perhaps the most famous member of the Russian motorcycle gang is Jozef Hambálek, who years ago brought discarded military equipment to the area in Dolná Krupa. He needed it for museum activity, but he was fined by the Ministry of Economy because he did not report the technology to the authorities.

Matej Kandrík from Stratpol to ensure that the Russians do not maintain fraternal relations not only with the Night Wolves, but also with other curious organizations in Slovakia.

“There are also relationships and cooperation with many others, such as various clubs in military history, but with a motorcycle gang called Brother for Brother. They go to various reverential events such as laying wreaths on the grave of an unknown soldier, monuments of the Red Army and the like. “ Kandrik explained.

At the same time, he added that I had, to a certain extent, raised the agenda of the diplomats of the relevant professional issues. ““ Kandrik remarked.

He underlined that the Russian embassy is a well-knot mix of different types of cooperation and relations. “Such cooperation raises some questions. Normally, we would probably expect cooperation with a language institute, cultural center or some organization in support of culture. And we see the laying of wreaths with bikers on graves and memorials to fallen soldiers, “ the expert underlined.

a curious story is a dispute between former Russian ambassador Pavel Maratovich Kuznetsov and member of the Slovak dezinfo scene Tibor Rostas.

He was to visit the ambassador together with Dušan Budzák in 2014, and they probably also talked about the potential subsidies of Rostas’s magazine. Coincidentally, an audio recording escaped the meeting, which remains little anonymous outside the community.

In 2016 about her in your blog the current member of the national council also wrote, at that time especially the blogger Ján Benčík.

“The basis of the foreign policy of the Soviet Union used to be the support of the spread of the ideas of communism, socialism, our way of socialist life, as it seemed to us at the time, the best, flourishing system. That is, the movement for brighter tomorrows in communism. That’s how it used to be, ” to hear the voice of Kuznetsov speaking. The voice continues in the description of the situation.

He also said cult words about briefcases full of money. “We carried dollars in briefcases, distributed them to the leadership of the communist parties – in order to support the spread of the communist, socialist revolution around the world,” he added in the recording.

As Benčík writes, Rostas had to express hope in a single audio track, whether there is an initiative on the part of Russia to sponsor a medium in Slovakia that would promote greater “reciprocity“.

Kuznetsov admitted at the time that it was a mistake to stop supporting ideologically related organizations and that they would like to return to such support.

You are reading this article in its entirety and without ads, thanks to its membership in Startitup PREMIUM.

Slovakia will be protected by Czech fighters

‹ “Golden Wedding” for the San Marino Rally … this year the 50th edition will take place › A vehicle rushes into a crowd of revelers in Belgium: six dead