Favoring votes is not the norm, says Abela in a debate with Grech

Prime Minister Robert Abela stressed on Wednesday that the majority of the electorate was not in favor, while admitting that parochialism will remain as long as Malta maintains its current electoral system.

“That is why we need to discuss electoral reform,” Abela said in a debate with Nationalist Party leader Bernard Grech. “We need to discuss issues such as whether Malta should maintain its 13th district or become a single district, as is the case for the European Parliament elections.”

The Labor leader and Prime Minister also said that he expects his elected deputies to uphold the principle of integrity.

“There have been episodes over the years that have disappointed people. I understand them and they are right. Mistakes happen, but integrity and fairness are cardinal principles, ”he said.

Grech took care of this, and reiterated his position that the granting of tax refund checks on election eve amounts to the purchase of votes.

That, he said, was clientelism at its best.

The two party leaders were discussing each other in an event organized by the Malta House and led by Rachel Attard.

It was the third time in a week that the leaders of Malta’s two major parties appeared on stage together, following a rather outrageous debate at the University of Malta and a Q&A session led by the SME Chamber.

Grech assured members of the House that the PN government would not compete with the private sector by employing more people in the public sector and ensuring a “level playing field”.

Planning and the environment

The two leaders seemed to agree that the government should be clear about the planning process.

Asked about a controversial permit to build a huge block of flats in a sensitive part of Sannat, Abela stressed that the permit is still subject to two separate appeals – one to the EPRT and one to the courts.

He admitted that Labor and the PA had made “mistakes” in recent years, saying that the party’s focus on the environment in the election manifesto was intended to address this.

The President of the House of Malta Marisa Xuereb and the Chief Executive Marthese Portelli in the audience. Photo: Jonathan Borg

The PA, he said, was an autonomous authority but also has a duty to “adhere to the priorities of the government with a strategic vision,” he said.

Grech, on the other hand, stressed the need for Malta to “beautify” and added that there were unequal conditions in the way planning permits are being granted.

He said the PA needs to be transformed to really focus on planning, rather than permits.

The two leaders also took each other on the trackless tram proposed by the PN and the metro that the Labor Party is proposing.

Grech acknowledged that the party’s tram proposal would require widening of some roads but stressed that no bike lanes or paths would be given to make way for an eventual tram. 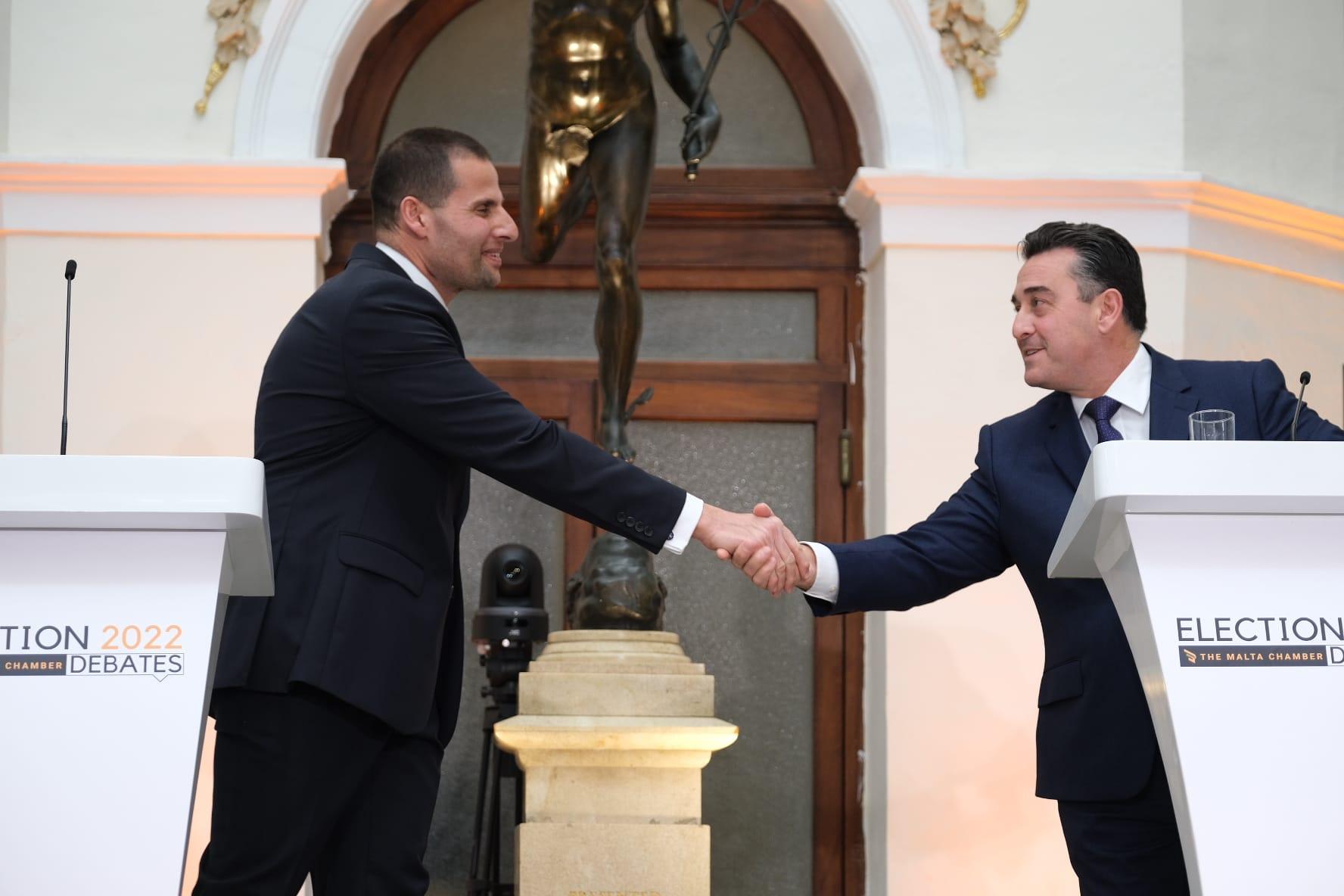 Both leaders shake hands at the end of the debate. Photo: Jonathan Borg

Abela, on the other hand, implied that the PN proposal was an amateur one and compared it to the study of the metro drafted for the government by the international consultants Arup.

The metro plan would be costly if implemented, he acknowledged, but Arup had also proposed splitting the project into sections.

On the PL’s proposal to push for compulsory trade union membership, Abela admitted that this was an issue that needed to be discussed with the social partners before it could be implemented.

He said that the issue will be discussed among employers and workers’ representatives in the Malta Council for Economic and Social Development but stressed that the most vulnerable workers need to be protected.

Grech, on the other hand, acknowledged that the PN had initially proposed it in a pre-budget document but changed its mind after consultation and now believes that union membership should be purely a matter of choice. .

‹ Toulouse. Emmanuel Macron in Toulouse for the 10th anniversary of the Merah attacks › The largest national flag of Hungary will be flying at the Citadel from March 15