PICTURE: The occupation of Tibet was demonstrated in Prague, and the Senate hoisted a flag

Today, more than 800 town halls, regional authorities, schools and other institutions in the Czech Republic, including the Senate, are commemorating the Tibetan uprising against the Chinese occupation by hoisting the Tibetan flag. The Flag for Tibet campaign was launched in the mid-1990s in Western Europe to highlight the long-standing human rights violations in Tibet and to show solidarity with the local population. In the afternoon, a demonstration by Amnesty International against the Chinese occupation of Tibet took place in front of the Chinese Embassy in Prague. 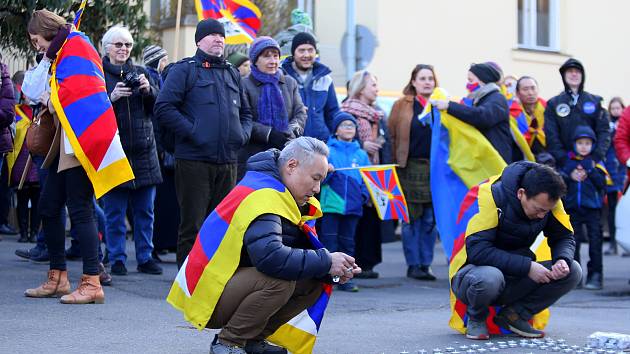 Demonstration by the human rights organization Amnesty International against the Chinese occupation of Tibet.

The Flag for Tibet event takes place in a number of countries every year on March 10, when more than 80,000 Tibetans died during the 1959 uprising. Hundreds of thousands more died in the following years in prison, labor camps or famine.

The Czech Republic has been joining regularly since 1996, when the first four Czech cities hoisted the Tibetan flag. Last year, 838 municipalities, towns, city districts or regions joined, according to the Lungta association, which seeks to inform the Czech public about the situation in Tibet, Tibetan culture and Buddhism. This year, the number of town halls involved will be roughly the same.

IMAGE: The terrible ‘manufactory’ of the Memory of the Nation is also fighting for Ukrainian freedom

Tibet was occupied by the Chinese army in 1950. Beijing insists it is historically an integral part of Chinese territory. He claims that his government has brought prosperity and stability to the region. The Chinese Communist regime rejects accusations of Tibetan exiles and human rights defenders of repression and human rights abuses.

Prague is attacking: Six teams in the CFL and four in the division

Dosimeter, double meter. The big parties have a struggle in Prague. Who makes money on it?

‹ The most refugees are in Prague and Central Bohemia. The region will select cities for temporary hostels › Taser in Florence, from Monday 14 the gun supplied to the police