Professor Anders Tegnell was the Scandinavian nation’s chief epidemiologist and architect behind its pandemic strategy, which avoided total shutdowns. His almost daily press conferences had Swedes glued to their screens during large parts of the crisis.

In Geneva, he will work on global vaccinations against the coronavirus, coordinating the activities of the WHO, UNICEF and the public-private vaccine organization Gavi.

Sweden became an international outlier last year when it refused to follow the rest of the world in shutting down society in order to slow down the spread of the virus. Instead, its government relied on on citizens’ sense of civic duty to protect the population.

Professor Tegnell has consistently denied that “herd immunity” was the purpose of the approach, arguing that more restrictive measures were not effective enough to justify their impact on society.

But some – including Sweden’s King Carl XVI Gustaf – criticized his decision for not protecting the elderly in the early stages of the pandemic. 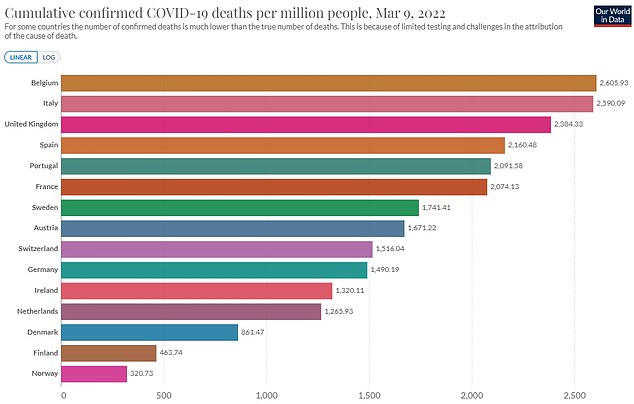 Sweden stood out among European nations and large parts of the world for how it reacted to the pandemic. The graph shows: Covid mortality per million people in Western European countries

Austria shuts down mandatory Covid-19 vaccines for all adults and says the pandemic no longer poses the same danger, just weeks after the law came into force.

The alpine nation with nine million inhabitants was one of the few countries in the world that made efforts against the coronavirus mandatory for all adults.

The law came into force in February and demanded a fine of up to 3,600 euros (3,000 pounds) from mid-March for those who do not follow it.

But Minister Karoline Edtstadler said that the law’s “infringement of fundamental rights” can no longer be justified by the danger posed by the pandemic.

“After consultation with the Minister of Health, we have decided that we will of course follow what the (expert) Commission has said,” Edtstadler told reporters after a government meeting.

“We see no need to actually carry out this mandatory vaccination because of the (Omicron) variant that we are mainly experiencing here.”

Professor Tegnell – who has been Sweden’s state epidemiologist since 2013 – announced his new role: “For 30 years I have worked with vaccines and at the same time always been passionate about international issues.

“It is still very important that the vaccines reach the countries that have not had the financial means to buy their own vaccines.”

His approach was praised by the libertarian right in Britain and the United States and the social democratic center-left in Sweden.

He became a cult figure in the country, with people tattooing his face and waving banners with his name.

However, with the advent of the Alpha variant at the end of 2020, the country’s government tightened its measures and limited the number of people who could be met in groups of 50 to eight.

More than 17,000 people have died in Sweden from or with Covid, many times more per capita than in the Scandinavian neighboring countries.

But it has also suffered less than many other European countries that have also opted out of closures.

WHO supported a more lockdown-centered strategy for pandemic management throughout Professor Tegnell’s tenure as Sweden’s head of health.

Norway’s Covid CEO Frode Forland said it was “natural” to leave after “the worst part of the crisis has passed”.

He told Economic times: ‘He has been under enormous pressure at work.

“It has been a challenge for many of us who have been in these positions for the past two years.”

The country’s official Covid commission concluded that Sweden was right not to introduce a strict lockdown in early 2020.

But the Commission also said that the authorities should have “chosen more rigorous and intrusive disease prevention and control measures” at the beginning of the pandemic.

A Swedish epidemiologist, who declined to be named, criticized Professor Tegnell for failing to protect the elderly.

The epidemiologist told FT: “We have all been very critical of the way he initially worked with this.

He asked for evidence before acting and said “we have no evidence”. But when you are in a new situation, where there is no evidence, you have to take precautions. ‘

US General: No need to add ground forces in Sweden, Finland

No need to add ground forces in Sweden, Finland

‹ The Vion fire station, in the center of Toulouse, will move within two years › Prague Zoo offers the possibility of supporting Ukrainian zoos by purchasing “Charity Tickets”