The war in Ukraine: “Cut off the Russians from SWIFT!

Jakub Mazovec, who was the first of the demonstrators to speak into a megaphone, said that no one can expect that cutting off Russia from the SWIFT banking system will not affect even the citizens of the European Union. “But what is it against what Ukraine is experiencing now? There are 11,000 banks in the SWIFT system, Putin will feel this cut not only as a symbolic act, “said Mazovec.

He also said that no SWIFT system would replace and that no other system would be enough to handle payments and finance wars to the extent that SWIFT allows Putin today. Protesters also accused the German chancellor of cowardice and insufficient help from the state, which he previously called an ally. “They sent helmets to Ukraine. What will they send next? Pillows?” Said another indignant speaker.

Protesters brought with them Ukrainian flags and hand-made banners in German, Czech, Ukrainian and English. Some of them had slogans written on them such as “Don’t let Kiev fall again “,” Ribbentrop-Molotov = Baerbock-Lavrov “or” Olaf Schröder ??? “who referred to former German Chancellor Gerhard Schröder from the same party as Scholz. After the end of the Chancellor’s term, Schröder worked actively for Russia’s Gazprom.

Other banners pointed Germany to a business partnership with the killer. During the demonstration, protesters shouted to the windows of the German delegation, words like “shame”, “Putin is a murderer” or “Let’s defend Ukraine!”. 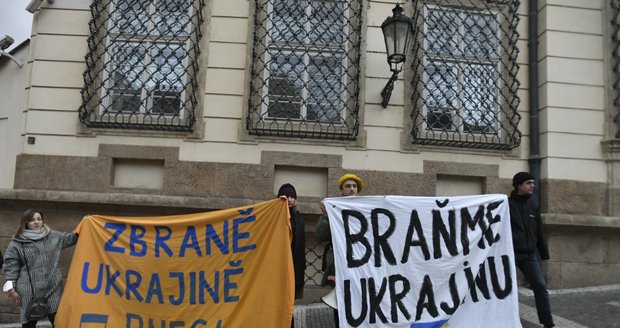 Demonstrators demanded that the German embassy cut Russia off from the SWIFT system,

‹ Trade organizations offered help to Ukrainians, incl. workplaces › The vanguard of Ukrainian refugees arrived in Bohumín. They will continue to Brno and Prague