SEE: Zbrojovka took over at the end and the general defeated Opava

Within the 80th minute, it didn’t look like Zbrojovka’s football players in the general were in a pleasant mood for the spring start of FORTUNA: NATIONAL LEAGUE. In the end, however, the Brno stadium in Srbská Street won a duel with Opava and won 3: 1. 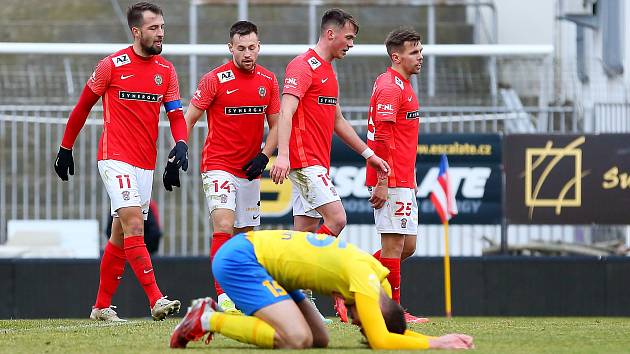 In the general team, the Brno footballers (in red) defeated Opava 3: 1 for the spring start of the second league.

Brno coach Richard Dostálek set up a different line-up for each half in a somewhat unusual way, Jan Moravec and Jakub only Nečasi the whole duel. “Our intention was to get the maximum number of healthy players into the game, which we did. For the first half, we chose a lineup that may not have been typical of the last matches, but we wanted to see players who are not used to playing together, how they can react to each other. At the half, we made eight changes plus the post of goalkeeper and we had the intention we had. We are glad that everyone played a healthy duel, except for Peter Štepanovský, who had to take turns due to minor problems, “the Brno coach described.

Rosice is starting the MSFL spring program. They rely on hardness and honesty again

Zbrojovka lost from the fiftieth minute when Samuel Šigut prevailed, but in the last ten minutes Jiří Texl, Adam Fousek and Jakub Přichystal scored. Who said the basic set for the introductory spring round, in which Zbrojovka guests Prostějov on Friday from five o’clock in the afternoon? “We have our heads tangled, but in a positive way that we have something to choose from. The boys talked about a place in the starting line-up and we have a week to prepare for the match. We will do our best to choose the best possible set, “added Dostálek.

Two examinations at once. They effectively detect cancer in Bohunice