He flooded Prague’s Letná for the eighth time on Saturday, February 26, shortly after noon with the music, colors and general merriment of the traditional Letna Carnival. The aim was to involve the newcomers not only in the parade, but also to provide them with an extraordinary comprehensive tour of the Letna museums, galleries and other places where they do not normally visit. The participants of the unique event thus received quality art in the form of theater, paintings and music. 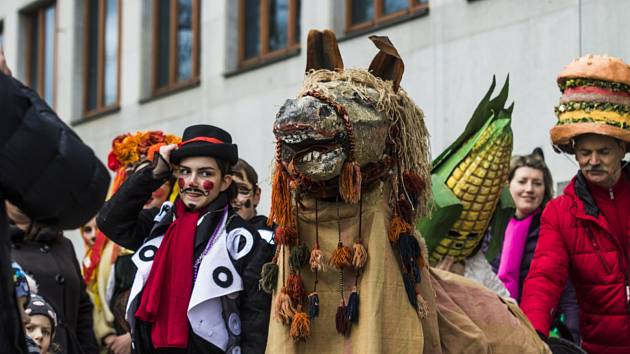 The opening and at the same time the first stop was at the National Technical Museum, where the band Furiant played for dancing and singing. The participants of the swarm then had the right of carnival and another great program followed. The newcomers could watch the Carnival play performed by the Prague Theater Association Ty-já-tr or a performance by stilt walkers. If you got tired of masquerade, you could also go on a tour of the technical museum.

The cheerful procession then moved to the National Agricultural Museum. Here, too, the Furianti played steadily, replacing the amateurs from Ty-já-tru with an interactive folk song and a walk called Grandfather, Please Song. In the museum, they could see what the Old Bohemian slaughterhouse looked like and what tools were needed for it.

PICTURE: At the Ctěnice Carnival, the bear, the devil and the president were welcomed in the procession

The third stop of the Letna Carnival was in Letohradská Street in the Letka Theater Club, where the actors Ty-já-tru played a poetic haunting performance We have a skeleton in a closet.

The penultimate stop was made by a masquerade parade in Korunovační Street in the Water Tower, where those interested viewed an exhibition by a 37-year-old Czech artist with Russian roots, Vladimír Kyseljov. The choir Sborůvky also contributed to the cheerful mood, as did Pavel Langer with Carnival Enchantment.

SEE: Mice belong to heaven. And also to Chvalský chateau

The evening end of the carnival belonged to the Scarabeus Gallery and the Coffee Museum. He was not only about coffee but also about wooden actors – puppets. The Letna Carnival culminated on Saturday night with the burial of a bass. The chamber ensemble of Michael Pospíšil from Ritonello from Vysočina presented singing and playing period instruments with the performance The Carnival Has Already Been!

The event was organized by Galerie Scarabeus together with other cultural institutions in the Prague 7 district and artists.