Donors are heavily participating in a charity fundraiser for Ukraine announced by the Scout Institute. The association’s spokesman Jakub Ambrozek said that although the material collection originally aimed more at surplus items, people also brought newly purchased outdoor equipment. They also provided donations to the company. Instead of assembling several cars, the assembled material aid will send a whole convoy of cars to Ukraine. 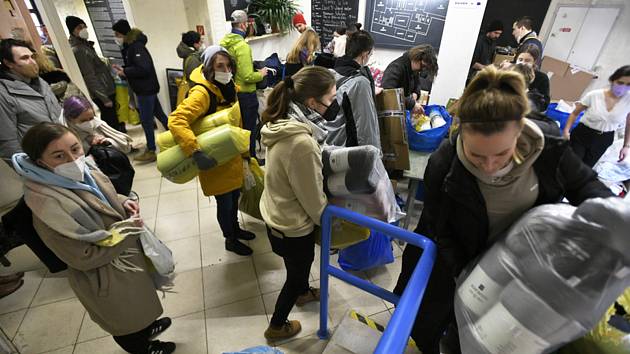 Charity collection for Ukraine at the Scout Institute in Prague.

People can bring medicines and medical supplies, sleeping bags, mats, blankets, shoes from size 42 and a loaded power bank to the institute, which is located on Prague’s Old Town Square, until 22 hours on Saturday. “We launched the collection on Friday and now we have a whole floor filled with things,” Ambrozek described. “People took it by storm,” he said, adding that reality far exceeded expectations.

The idea for the collection was born thanks to the fact that a girl with a family in Ukraine works at the institute. Relatives wrote to her what they didn’t get. The scouts originally wanted to hand over the collected items in person at the Ukrainian border, but due to the number of donations, they will probably have to use the warehouses. Therefore, they are now coordinating the event with the Ukrainian embassy, ​​which will issue them a confirmation of humanitarian aid.

Ukrainian Halina doesn’t even have time to sleep now, she organizes a collection for soldiers

The first car with material assistance left the institute on Saturday morning. Others will follow him on Sunday. “We have already received over fifty offers from people who are willing to rent cars or drive,” Ambrozek said. Additional helpers may be able to report via form.

The first refugees from Ukraine arrived, a big wave of the region awaits on Monday

‹ Sweden, Finland closed the air for the sanctioned Duma chairman who then chose the northern Norway route › Mister Sergi Punset and Mattia Verona renew for a year with Engas Hockey Vercelli – Infovercelli24.it