Demonstrations in support of Ukraine at the Russian embassy

The Russian embassy building in Prague was spray-painted by protesters protesting in front of Russia’s attack on Ukraine on Thursday, red in blood symbolizing blood. The pair was intercepted by police overseeing the operation. Dozens of people demonstrate in front of the embassy. Two of them also targeted police officers because of their presence at the event. But the protest is without skirmishes. The demonstration is also taking place on Wenceslas Square, where about a hundred people gathered.

At around 10:00, several people stood at the embassy in Korunovační Street with the flags of the European Union. More people gathered in Boris Nemtsov Square. Protesters put a transparent sign in front of the embassy calling Russian President Vladimir Putin a murderer. In addition to EU flags, some people also have Czech, Ukrainian and Belarusian flags or banners condemning the war. At times, he plays the Ukrainian anthem. People are talking, expressing support and keeping up to date with events in Ukraine. Protesters include Czechs and foreigners.

At around 10:30, one of the demonstrators present began shouting “Public Security” aloud, the other blamed the police for protecting the Russian embassy. Shortly before noon, police detained two protests over splashing a small part of the building in red. According to ČTK, around 60 people were in front of the embassy building before 1:30 p.m.

Protesters also gathered at the statue of St. Wenceslas. Most of the protesters are young people. They brought the flags of Ukraine or banners with English inscriptions calling for an end to the war, for the suspension of Russian President Vladimir Putin, or for protesting against Russian aggression. At times, protesters chant slogans such as “Glory to Ukraine.” According to ČTK estimates, about 100 people took part in the protest before noon.

The Ukrainian community on Prague’s Wenceslas Square wants to demonstrate against the Russian invasion this afternoon as well. From 17:00 she called a protest called Prague stands behind Ukraine !, supported by, for example, the Million Moments Association. They call the participants via social networks, and over 900 people showed interest in participating on Facebook around noon.

The Russian army launched an air and ground attack on Ukraine on Thursday morning. Putin announced in a television appearance that he had given permission for a special military operation in the Ukrainian Donbas. The Ukrainian Border Guard then said that Russian forces had invaded Ukraine’s border from Russia, Belarus and the annexed Crimean peninsula. Moscow’s actions condemned the Western people and promised harsh sanctions against Moscow. 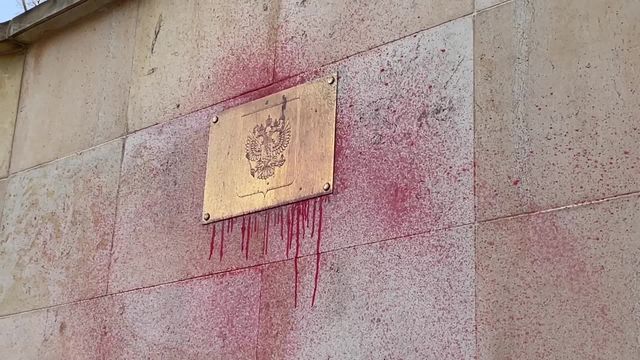