PICTURE: The Hostouňs have been rolling through Prague and they have bronze. The quality was confirmed in Příbram

The Meteora Prague Winter League did very well for the Sokol Hostouň football players under 15 years of age. They lost a single match and eventually took a great third place in the strong competition of the teams. 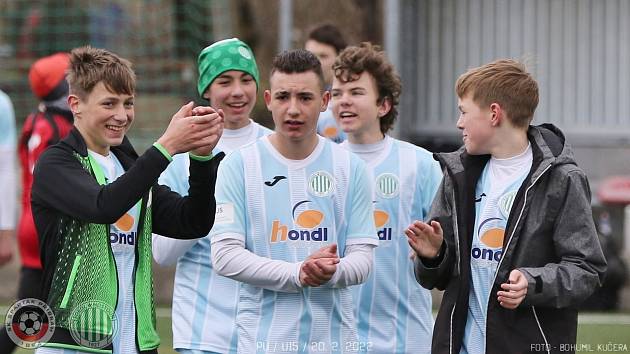 The charges of coach Jaromír Boháč and David Šíp lost a single duel in the metropolis with the final winner Dukla Jižní Město. She was sovereign and also played Motorlet very well. Hostouň drew 1: 1 with him, but had a better score, so she advanced to the bronze medal. A slightly younger selection of the home Meteor already stood in it and he was not entitled – Hostouň won 11: 1. “It was still an acceptable result for the younger boys of the opponent. In the tournament, we are sorry only for the aforementioned loss to Jižní Město, we should have played the finals for that,” coach Jaromír Boháč regretted it.

The diligence and responsibility of the whole team, together with the speed and a good move to the goal at the center striker, brought Hostoun a single individual triumph, the son of former Hostoun goalkeeper Jirka Fanta won the tournament’s top scorer trophy, scoring an incredible 27 hits. The creative Adam Dhouieb, as well as other fighters, also gave him an excellent second.

Praise for Švermov: the first year of the Klempt Memorial is said to have succeeded

They also demonstrated their quality in the subsequent preparation team with a very strong Spartak Příbram team. In the great area, which Kladno still lacks, with two grass playgrounds and a large artist only a year old, the Hostouň family had problems in the first place. When they got used to the field, they hit Dhouieb and then Fanta with a penalty. After the break, however, the opponent took advantage of the green-and-white mistakes, he leveled, but the last words belonged to the guests. After three nice actions, they ran to 2: 5 and it was decided. Fanta finally completed the hat-trick.

“The match was played on both sides and fights at the limit of the breakdown were part of the whole match,” said Jaromír Boháč, according to whom his team chose a weaker moment after the break, but then showed quality in the offensive game. “It was played 2×40 minutes, so at the end of both teams they had to reach into their physical reserves. The players deserve praise for how they managed the second match in two days and fulfilled the game tasks,” coach Boháč praised.

His team will have two more preparatory matches and then the start of the regional championship. “I believe that we will be in full force by the start of the competition and we will fight for the best possible position. Given that we have to play eighteen matches in the spring due to the lead and three canceled autumn matches, it will not be easy, but we will definitely fight for the title.” promises Jaromir Bohac.