Le Baruffe triumphs at the Teatro La Fenice in Venice

VENICE – Highly anticipated, highly followed by the media in its genesis and presented in world premiere on Tuesday 22 February, almost as if it were a season opening, The quarrelsto music by Giorgio Battistelli and booklet by Damiano Michieletto on the bill until March 4th, it is the answer to the many Solons who roam the theaters and social inveighing against “modern” direction, those of “write your own work, if you are capable of it” and who preach urbi et orbi the death of melodrama. The work, on the other hand, is very lively and attracts a vast basin as evidenced by the very full room of this artist in which a good number of young people participated, as well as Carnival masks, some tourists, season tickets, small Venetians, neophytes, payers, guests and various press. Michieletto if his work was written by him, adapting the famous Goldonian text, and to put the notes on it is Battistelli who returns to Venice after The mad doctor of 2016 and Richard IIImasterpiece dated 2005 and winner of the “Franco Abbiati” Award 2019. In addition to live, the evening was broadcast live on Rai Radio3 and on the Youtube channel of the theater, home of the “Corriere della Sera”, “Corriere del Veneto” and “Gazzettino”, thus also reaching the virtual public. 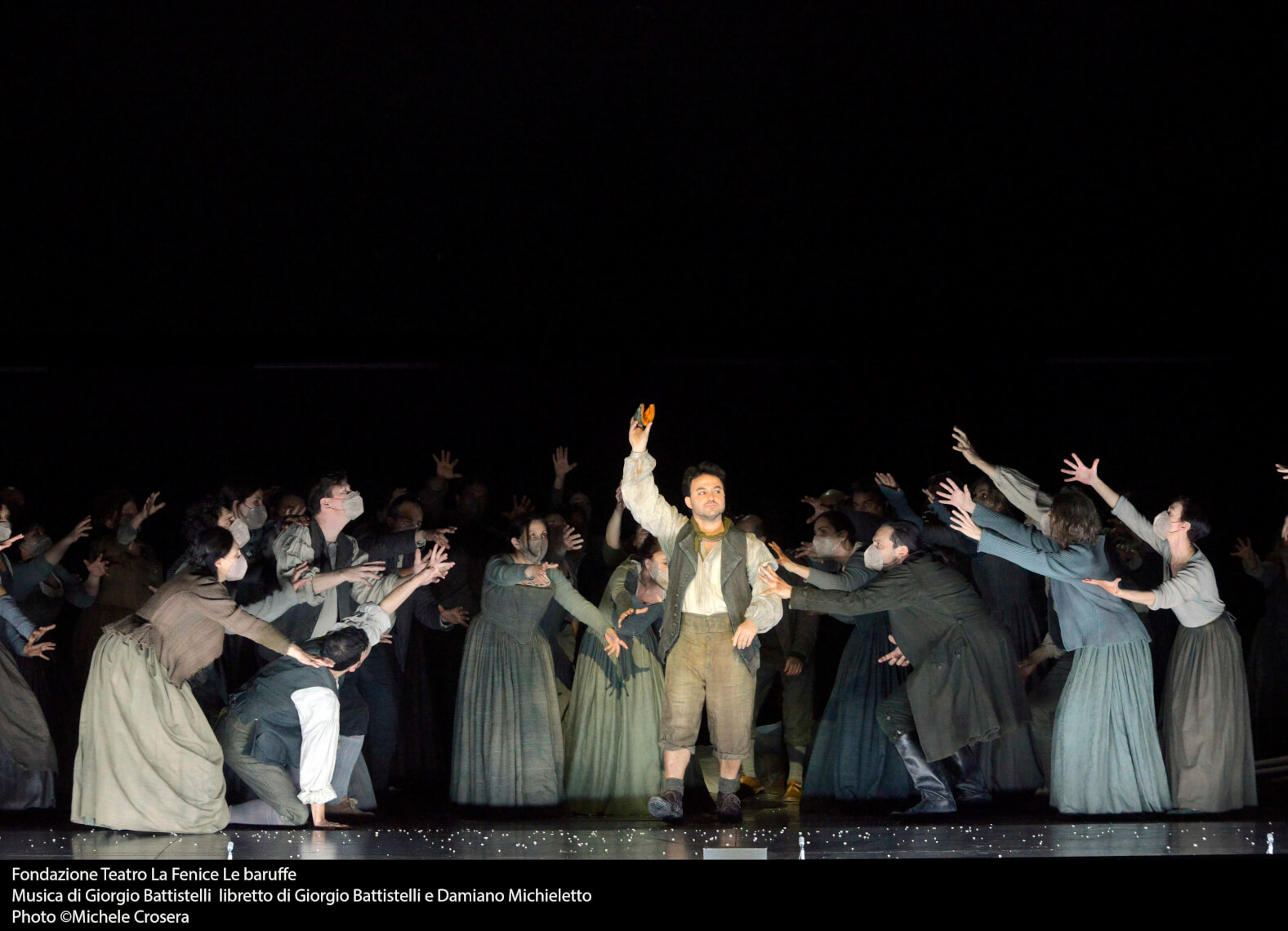 After Acquagranda, requested by the Teatro La Fenice to Filippo Perocco in 2016 and which was a real profane liturgy for the city on the anniversary of the flood, to which Michieletto gave shape to fully grasp the anguish of the event, the Venetian Theater returns to look to the local reality for a new production, once again strengthening the fundamental relationship with the territory. In fact, commissioned for the 60th anniversary of Marsilio Editori, which since 1993 has edited the national edition of the works of Carlo Goldoni, The Baruffe it is “theater for music”, as defined by Battistelli, which combines the two great loves of Michieletto, prose and opera. We still remember with emotion The fanthe young director’s only Goldonian foray. The quarrels remain chiozzotte in the language, describing a place inhabited by a plurality of souls. City that of Chioggia which in the prologue, indeed imperceptible, is defined through a catalog of proper names, winds, fish, insults, taken from the original text. This initial impetus then returns to the story that becomes more violent than playful, as suggested by Battistelli’s music, of which Michieletto captures the carnal side. He also comes back here, as in the last one Rigoletto, the fetishism for certain scenic objects that have risen to symbols, if not to silent characters, represented by that aphrodisiac slice of pumpkin, the engine of a cyclical story with Brechtian veins. There is little comedy, but humanity in this choral fresco is the creator of a collective rite, the quarrel, necessary to carry on a life that is not a dream, but social poverty. It only remains for the poor people to yearn for peace and… suca baruca as we deduce from the particular epilogue that recalls George A. Romero and Nino Rota (who will see, will understand). 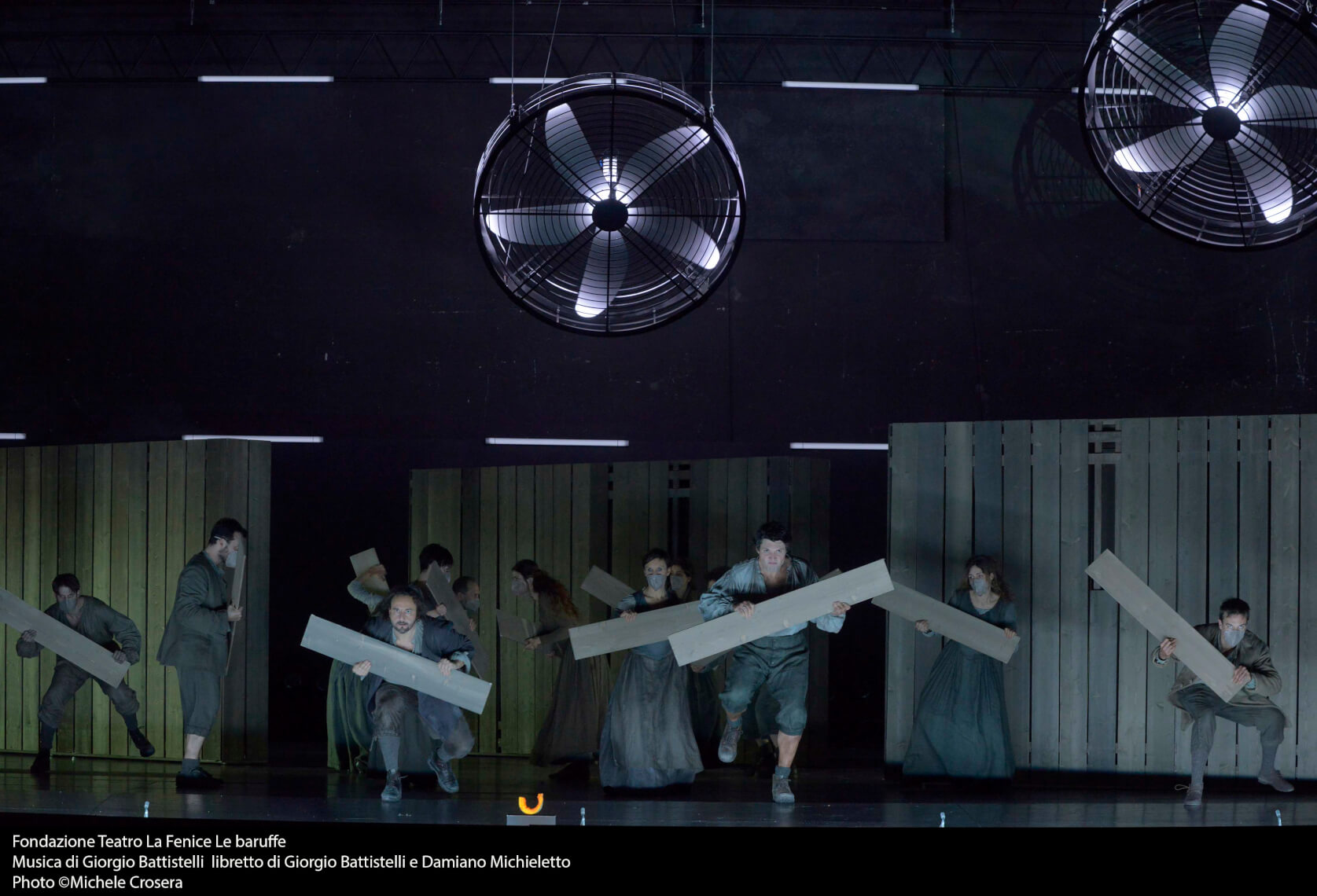 Paolo Fantino develops with happy coherence of means the double anxiety present in the text, the emotional and atmospheric one of the sirocco and the fog, recreated through “machines of restlessness” found in the lightweight design Of Alessandro Carletti and in the projections of Sergio Metalli necessary completion. As a result of the paintings of Longhi and Ceruti, it is a muddy, muddy humanity, without make-up and wigs, that of Scuffle and the costumes of Carla Teti they remind us well, just as those of the legendary were deliberately filthy Don Giovanni twelve years ago. The choreographic movements of Thomas William accompany the unraveling of the scene, of the wooden walls that the Chioggiotti destroy to give them a good reason.

The orchestra, under the direction of an inspired Enrico Calessoit gives strength and rhythm to the different characters in action, making a score full of timbres and accents shine that exasperate the contrasts on stage and induce particular emotional states in the listener.

It is they, the Chioggiotte, who dictate the law and the quintet chosen is well blended. They distinguish the fighting fag of Silvia Frigatothe authoritative Madonna Easter of Valeria Girardello and the Lucietta of Francesca Sorteni. Also good Loriana Castellano (Madonna Libera) and Francesca Lombardi Mazzulli (Little bear).

A Safa Korkmaz the task of selling the pumpkin ea Emanuele Pedroni that of comandador, sly commentator of coadjutor Isidoro.

Not only protagonists, there is also a people who echo, the choir well prepared by Alfonso Caianiunder a demanding vocal writing, in Chioggia, made up of sung notes and particular sound effects.

Ten minutes of applause for everyone at the premiere on 22 February with special ovations for Battistelli, Calesso and the technical cast.

Verona, Udinese and Venice: looking to the future with clear ideas